There all about aero, performance and comfort (and no, there aren't 13 of them)
by dave atkinson

We’ve been down to Fitzrovia today to take a look at the new range of bikes from 13. 13? 13. It’s a new bike brand from Halfords, based around an aero platform in carbon and alloy, with road- and mountain bike-influenced city hybrids and a CX bike thrown in for good measure and it’s available online right now on the Halfords website. 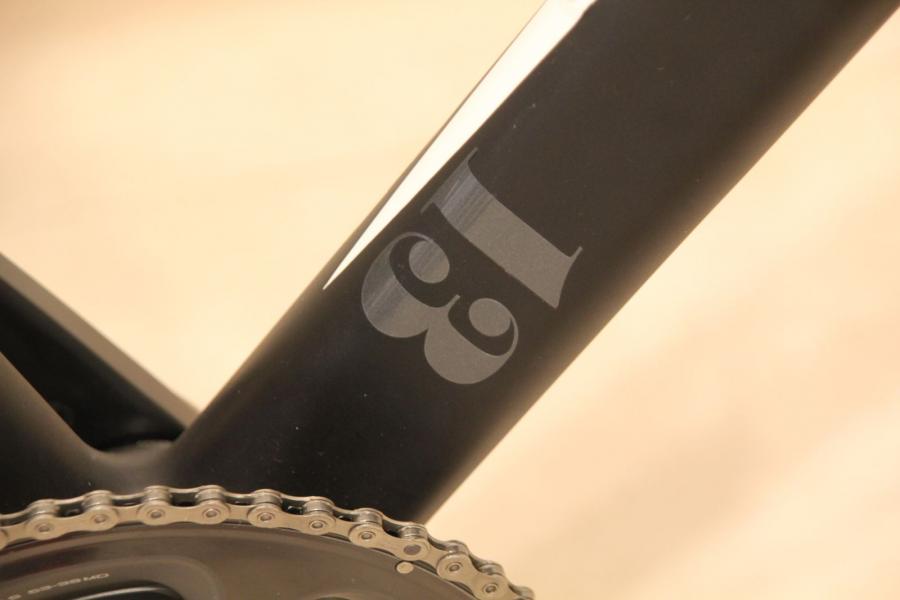 So why a new brand?

Having just bought out Boardman, Halfords obviously already have their own premium road brand with cutting edge design and aero tech - and they sell Pinarellos too. But they clearly think there's room in the market - and their stores - for another, and with premium road sales growing by 35% in the last year at Halfords, who's to blame them for wanting a bigger slice of the market? 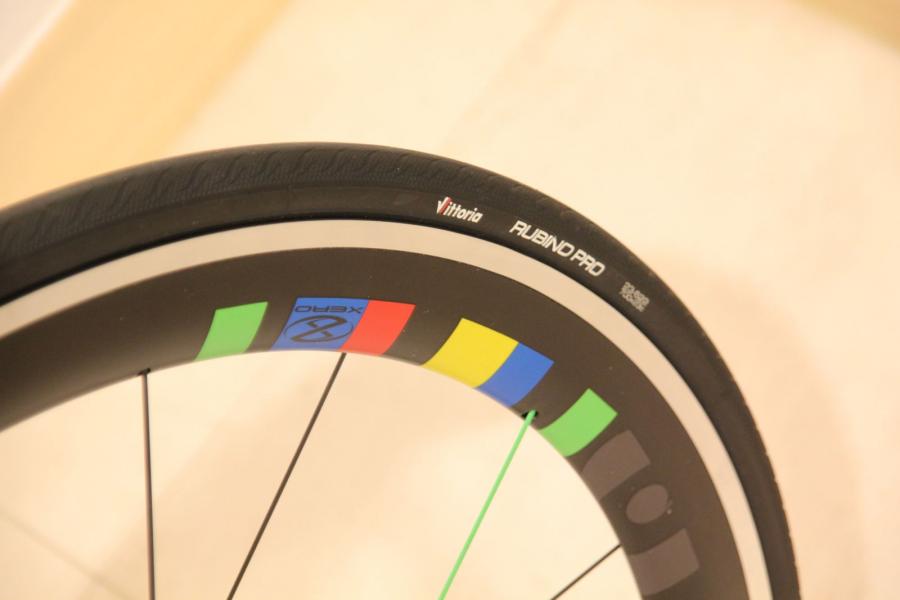 We had a chat to Justin Stevenson, the chief designer on the brand, to get a bit more information about how and why 13 came about. “We started with a premium customer in mind”, he told us. “We don’t really have enough choice in that market so we needed something. That was basically my brief, just that.” 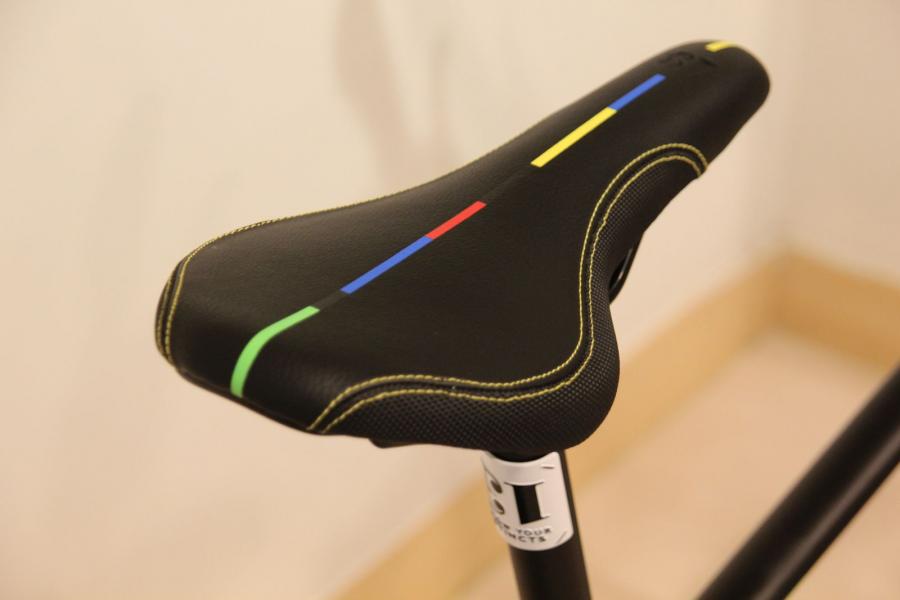 “In the end I started with a concept that comes from my riding. I wanted an aero bike but whenever I’ve ridden an aero bike I’ve always found that the deep section wheels can be uncomfortable and the frames are too, and they often carry a weight penalty. So the idea of the 13 road range was for the bikes to be aero and comfortable, with no weight penalty. We started with the Intuition Gamma, the top road bike, and we’ve tried to bring as much of that bike as we can to the models further down the range”. 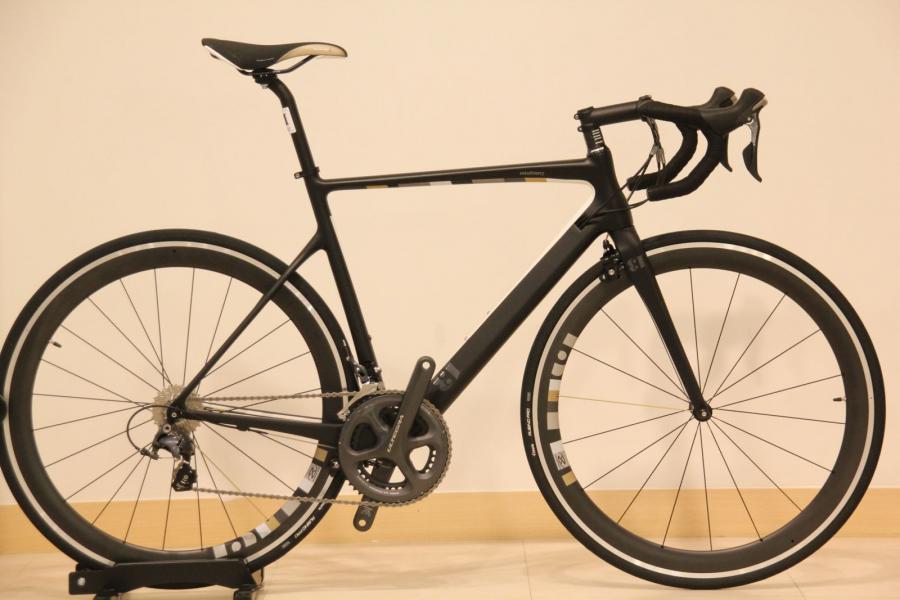 The Intuition Gamma will set you back £1,799 and for that you get a carbon aero frame with a claimed weight of 835g, a carbon fork, Ultegra transmission and carbon/alloy deep section wheels. The claimed weight of the full bike is 7.7kg 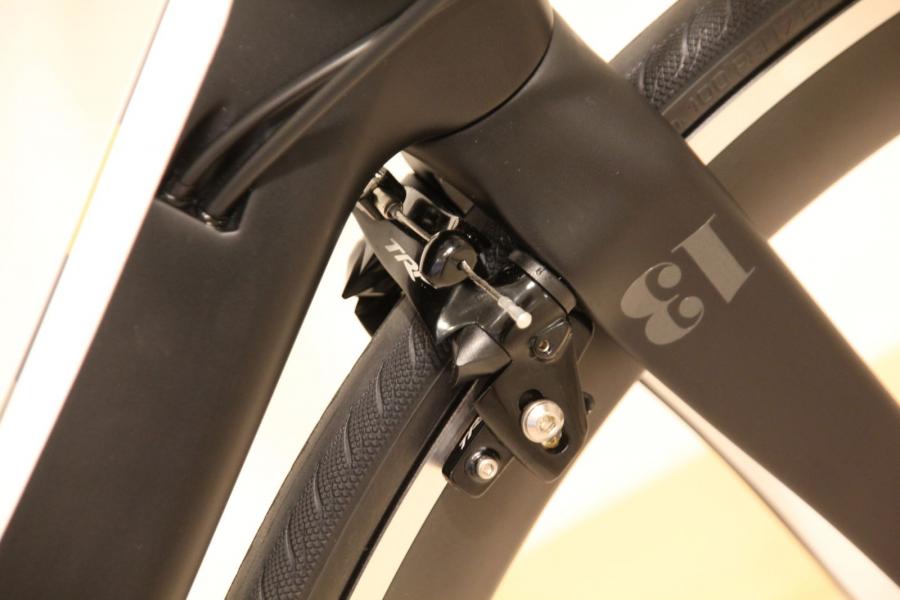 Both the front and rear brakes use direct mount posts, and they’re both kept out of the wind. The front brake is behind the fork, and the rear sits underneath the bottom bracket. All cabling is internal, and all the bikes feature full internal cable guides to make re-cabling the bike as simple as possible. 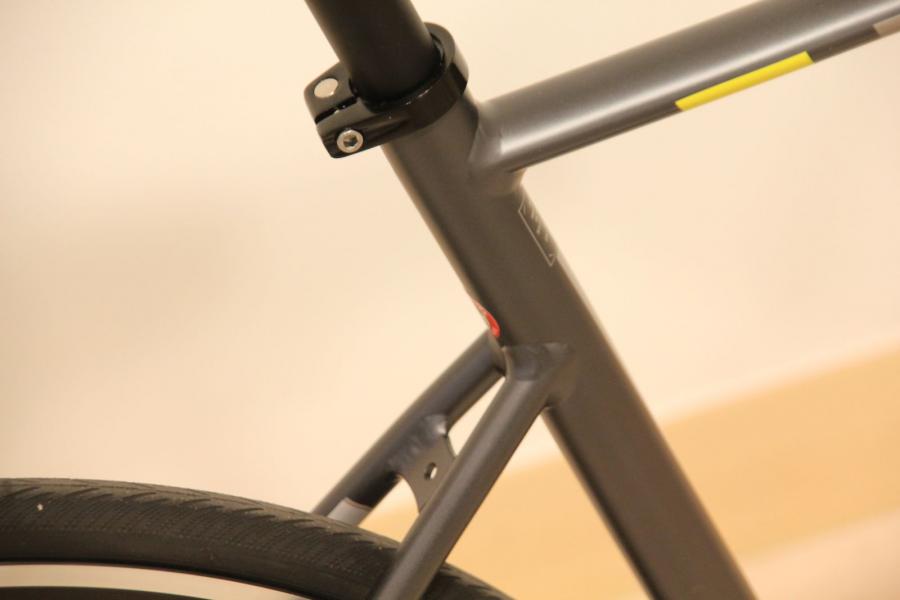 The team have spent time in the wind tunnel with the road range, and like many other manufacturers they’ve chosen to drop the seatstays down the seat tube for a simple aero boost (as shown the Intrinsic Beta above). The bike uses a standard 27.2mm seatpost, and the combination of that and the thin stays means added comfort, says Justin. “You lose a bit of aerodynamics with the round post but the combination of a thin post and dropped stays is about the same as normal stays and an aero post”, he told us. 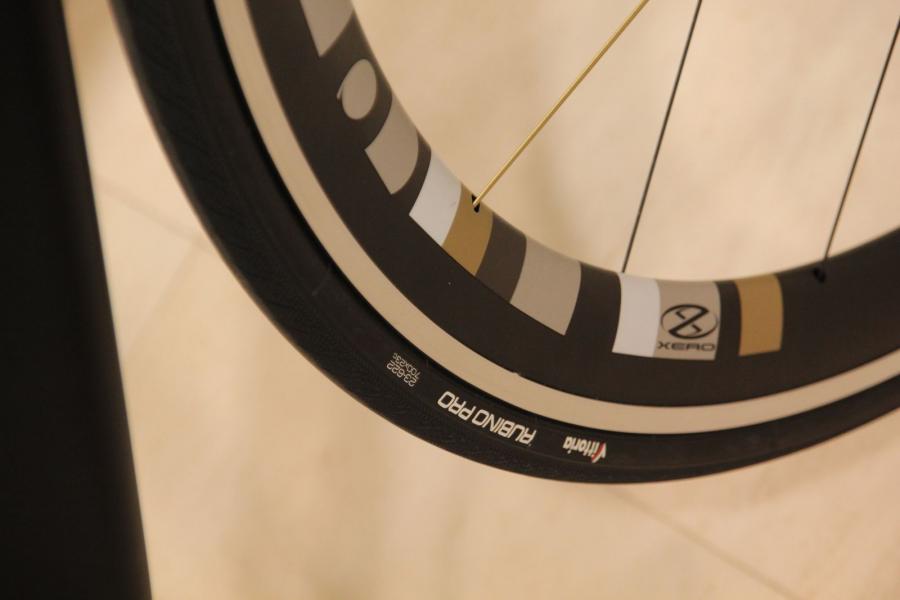 “Deep, wide wheels are the single biggest aero gain we can make”, he continued. “We’ve used an alloy and carbon construction because we found it gave better levels of comfort. The carbon is structural, it’s not just a fairing, but the spokes are attached to the alloy.” 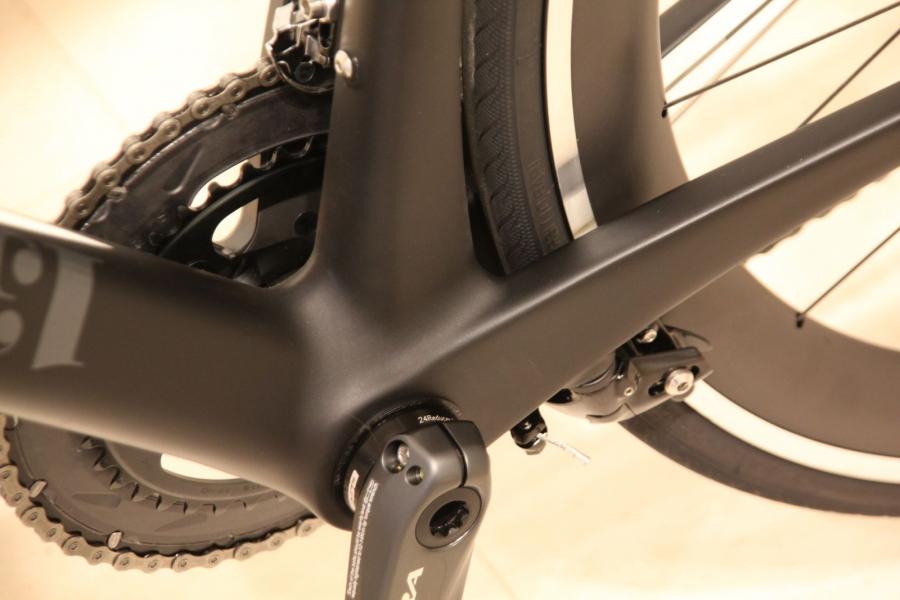 The head tube is tapered, but the bikes us a 1 1/4” bearing for the crown race rather than the more ususal 1 1/2”. It’s extra stiffness over a standard bearing but with less of a frontal profile than the bigger race. 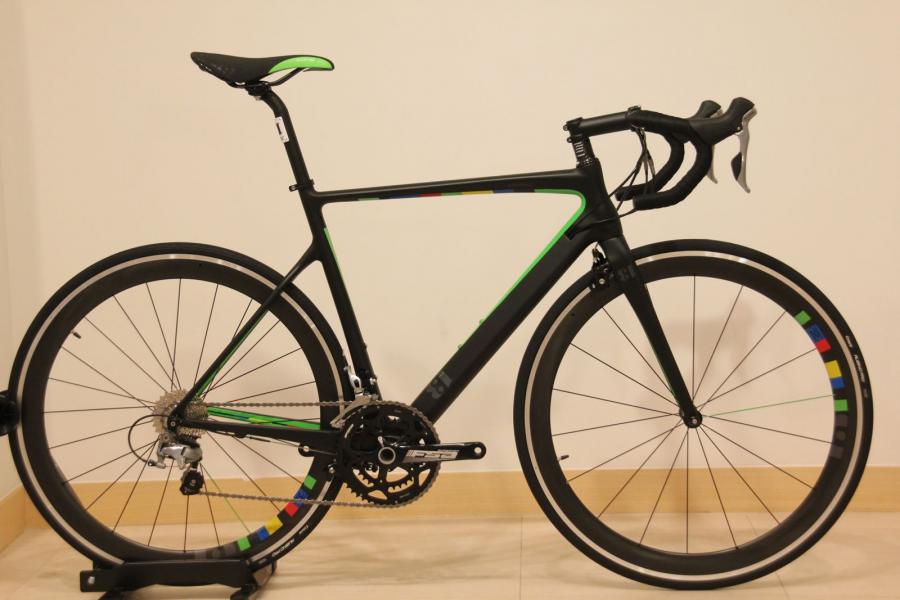 There’s two other Intuition models, the Alpha (£999.99) and the Beta (£1,399.99). Those two bikes share a 980g carbon frame and they also use a slightly heavier fork than the top end model. The Intuition Beta gets Shimano 105 running gear and some similar deep section wheels to the Gamma. Overall it only gives away a claimed 200g to the top model and that makes it the value pick for us out of the carbon bikes: you’re still getting a full carbon, 22-speed bike with deep wheels but you’ve got £400 left in your pocket. 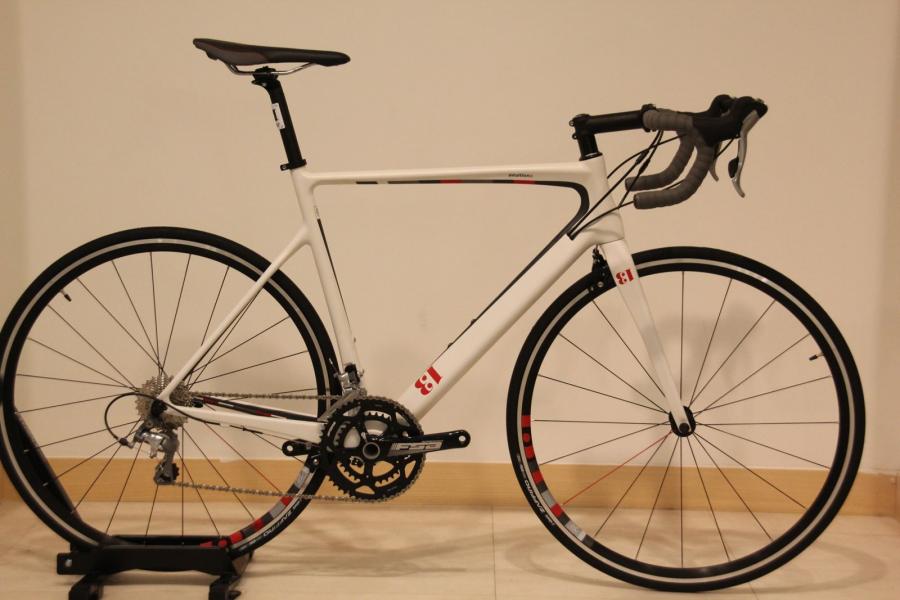 The Alpha is a Tiagra 20-speed build and the wheels are a semi-deep alloy. It’s got a claimed weight of 8.6kg Like all the Intuition models, it uses TRP’s T822/820 aero brakes for stopping duties. 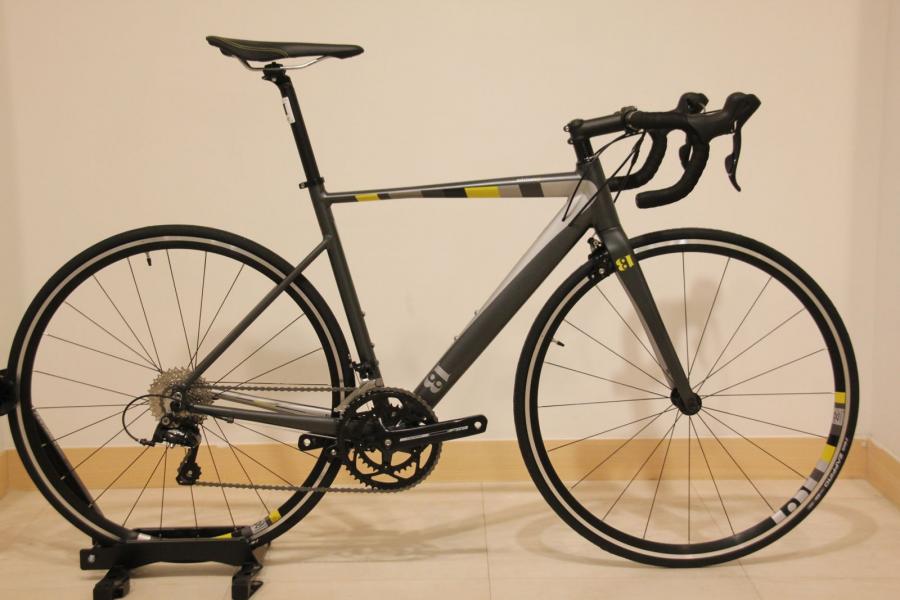 The Intrinsic is the alloy aero bike, which does a pretty good job of aping the shapes and curves of the carbon model. Again, brakes are hidden and cables internally routed.

The £749.99 Intrinsic Beta is a Sora 18-speed transmission with the same TRP aero brakes as the carbon models and an FSA Tempo chaniset to save a bit of spend. It weighs in at a claimed 9.5kg. 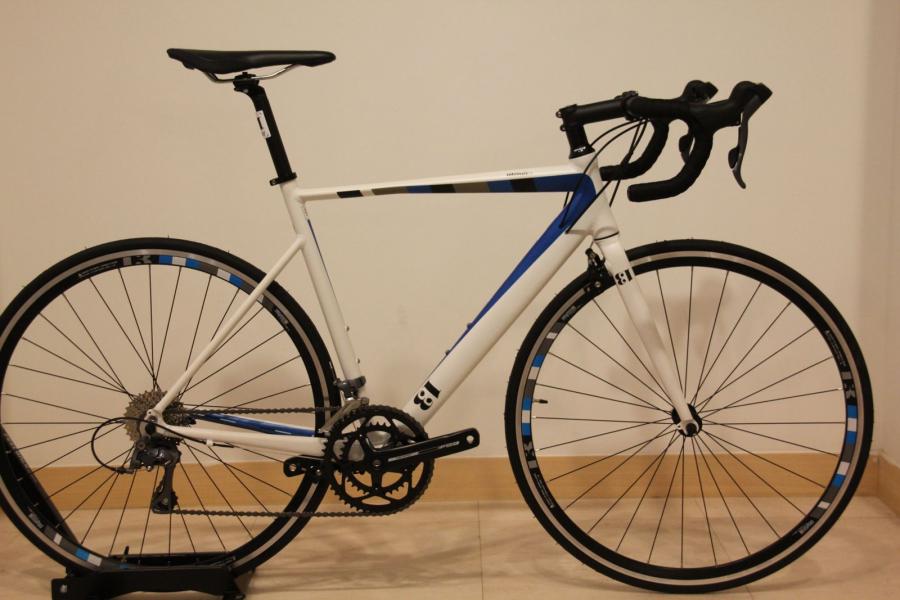 The cheapest road bike in the range is the £499.99 Intrinsic Alpha, which uses the same alloy frame as its dearer sibling. You get a 16-speed Claris groupset and a 10.7kg claimed all-in weight.

The bikes look good in the flesh; it’s nice to see some flashes of colour and a move away from the very safe black/red pallette. the £1,399 Intuition Beta, with green highlights and World-Champion-ish details, is the best looking in our opinion. As well as the best value. So we’ve asked for one of them. Stay tuned for a test. 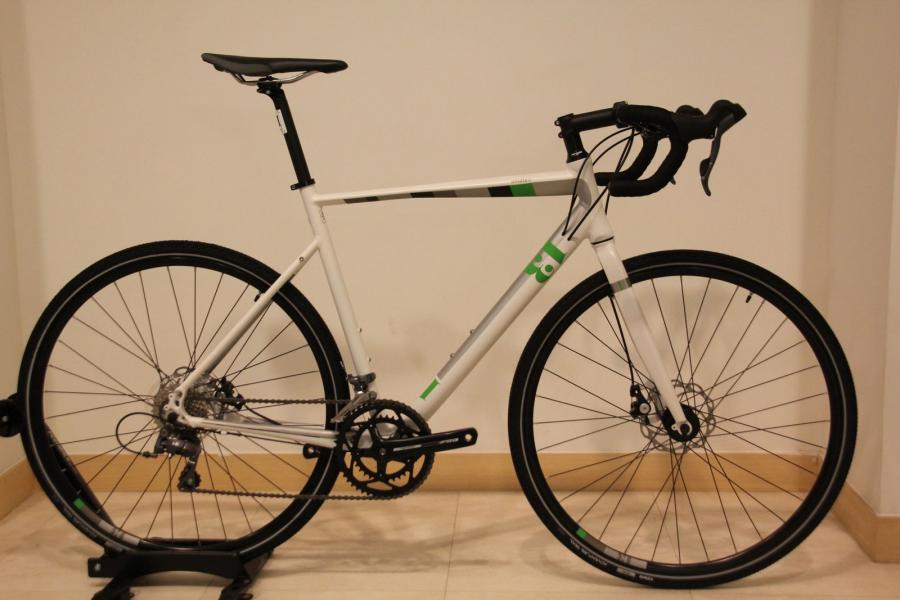 The Innate Alpha is touted as the CX bike; in reality it’s more of an all purpose commu-tourer and at £499.99 will appeal to people who like a tough bike to knock about on. 13 do have plans for a premium crosser too, but that’s still on the drawing board. You get Claris 16-speed and Tektro Lyra brakes for your money; it weighs in at a claimed 12.2kg. 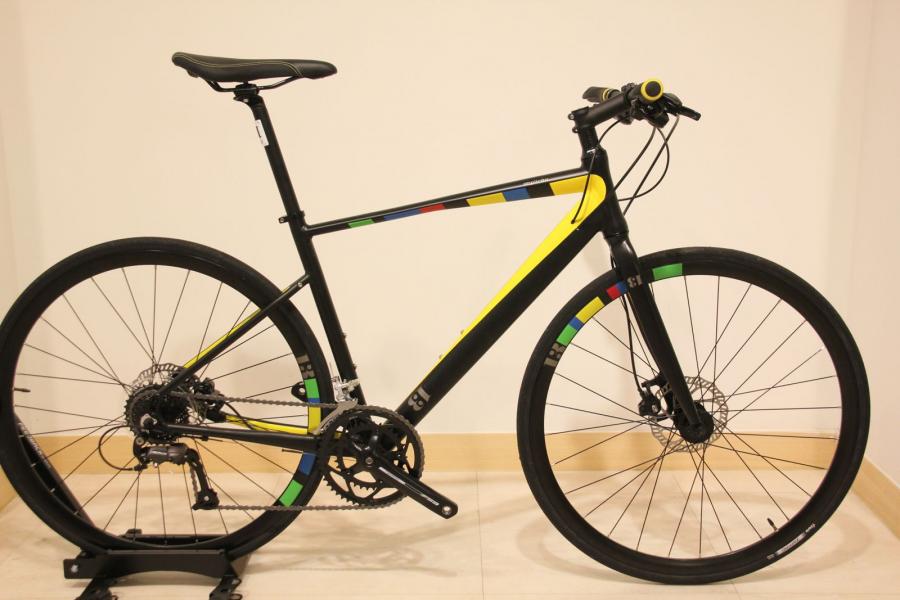 There’s a range of hybrid bikes too. Well, two ranges. The Implicit is the fast urban platform, with road gearing and rigid forks. The Aplha build at £499.99 still manages hydraulic discs (Tektro HDC300) and an 18-speed drivetrain with Altus rear mech. The £699.99 Implicit Beta gets Shimano Acera brakes and Tiagra 20-speed transmission. Both share a frame that takes plenty of design cues from the road bikes, with dropped seat stays and internal cables. 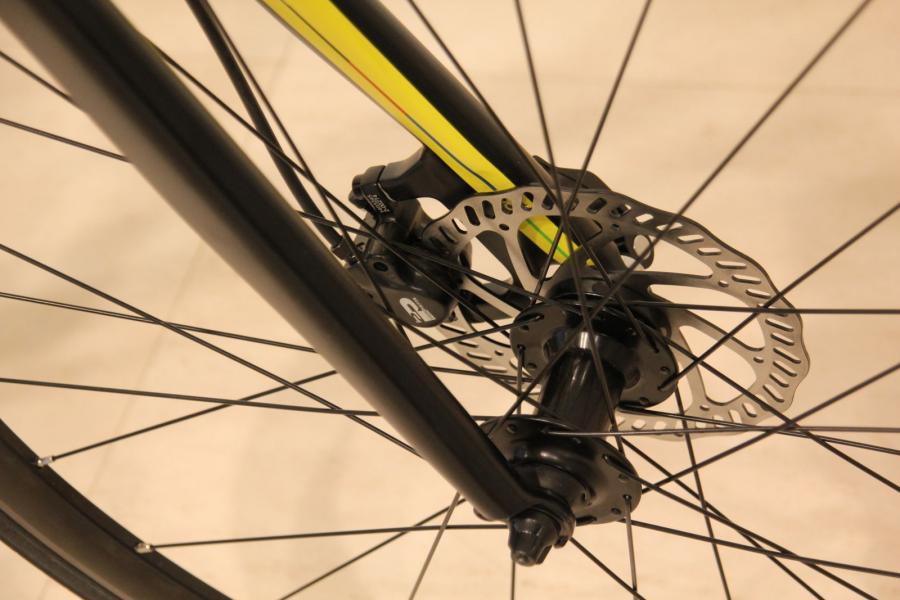 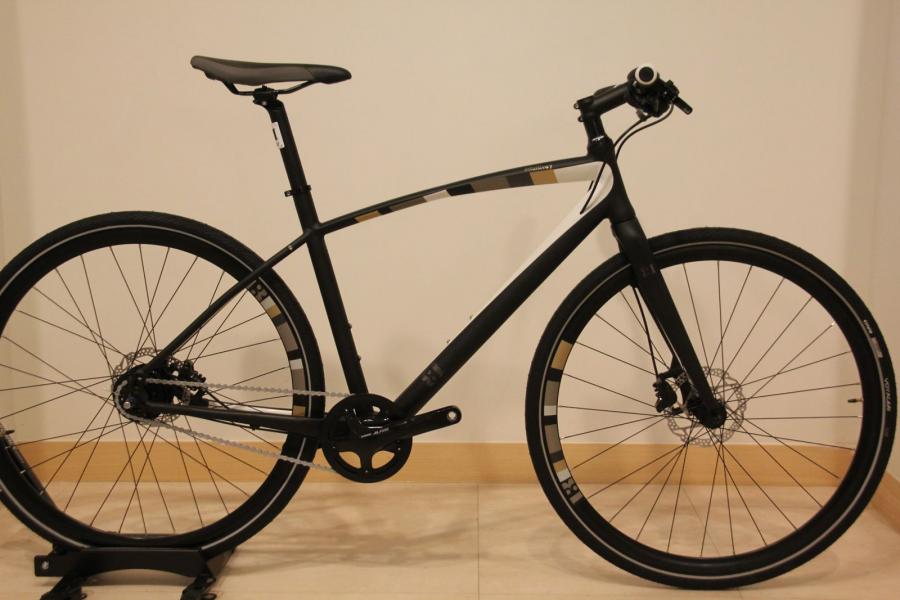 The Intuitive range is more based around the mountain bike geometry, and there’s three models. The cheaper two – The Alpha at £429.99 and the Beta at £499.99 – get Suntour suspension forks and mountain bike gearing. The £899.99  Gamma scores a carbon fork and an Alfine 8-speed hub. 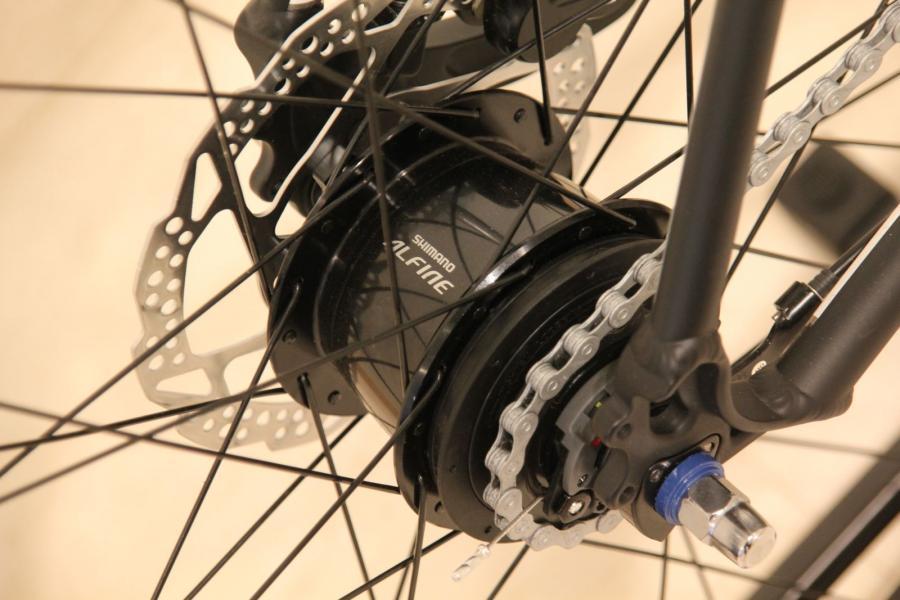 So that’s the whole road range for now but there’s more to come. “The plans for a bigger range are all on paper”, Justin told us. “Road discs are ready to go, and a women’s range is coming too. We’ll be looking at a higher end CX bike too.”

The bikes are on the Halfords website now and will be available in selected stores. As we were leaving Louise from Halfords was teeling us that someone had already bought one, so there’s some early aodpters out there…