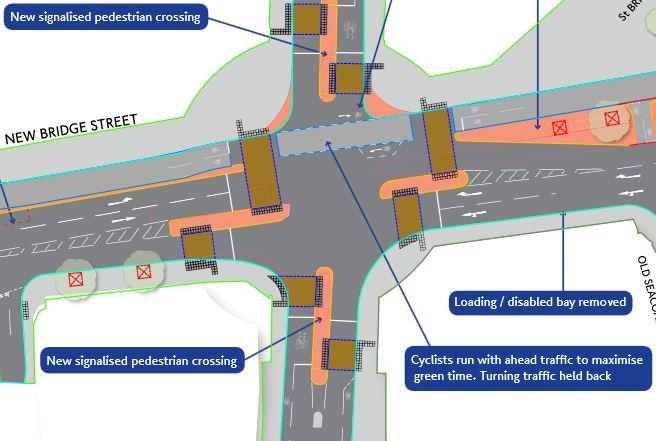 Ludgate Circus, the London junction where two cyclists have lost their lives following collisions with lorries during the past six months, will be made more dangerous for pedestrians if a planned Cycle Superhighway goes ahead in its current form, warns the City of London Corporation.

As the planning authority for that junction and other parts of the route of two proposed segregated bike lanes, the Corporation’s demand for changes could impact the project.

The claim was made in a report examined by the Corporation’s Planning and Transportation Committee last week as it considered its interim response to the current consultation being conducted by Transport for London (TfL) on the two proposed Cycle Superhighways that will pass through the Square Mile.

Dubbed ‘Crossrail for the Bike,’ one of the routes, running north to south from King’s Cross to Elephant & Castle, passes through Ludgate Circus which the Corporation’s director of the built environment describes in his report as “the most dangerous location in the City.”

The report says: “TfL’s proposals have significant benefits as well as implications. However, those benefits are heavily biased towards cycling. This unbalanced approach leads to significant implications for other users.”

It also claims: “The overall impact of the current proposals on pedestrians, local access and the environment are not in keeping with the Mayor of London’s Vision to ‘create better places for everyone’.”

On the subject of Ludgate Circus, the report says:  “It is already a location where many pedestrians ignore the pedestrian crossings. The proposed stagger crossings, reduced refuges island widths, excessive increases in wait times and the additional two-way cycle lane running through the junction, will add further risks and collisions, particularly to pedestrians.”

Members of the committee approved the report and are requesting a one-week extension from TfL to the consultation period, due to expire on 9 November to give more time for its final response to be drawn up.

Yesterday, a 26-year-old female cyclist died at the Royal London Hospital from injuries suffered when, according to witnesses, she was “crushed” following a collision with a tipper truck at Ludgate Circus last Friday.

In April this year, 32-year-old Victor Manuel Ben Rodriguez lost his life as a result of head injuries sustained when he was hit by a lorry while cycling through the same junction.

In a post on its Facebok page last Friday, London Cycling Campaign said of the latest incident: "Although we don't know the circumstances, this is a tragic illustration of why junctions like these need #space4cycling and why it's so important that plans like the N-S Superhighway (which include measures to make this junction safer for cyclists) must go ahead."

Yesterday, after it was confirmed the rider has died, the group wrote: "We're very saddened to hear that the cyclist who collided with HGV on Friday at Ludgate Hill has died. Our thoughts are with the familiy & friends."

A YouGov poll of 1,002 Londoners last week found nearly two thirds of respondents, 64 per cent, in favour of the Cycle Superhighways even if they removed traffic lanes from motorised traffic. Just one in four people, 24 per cent, objected to the plans, with ‘don’t knows’ making up the balance.