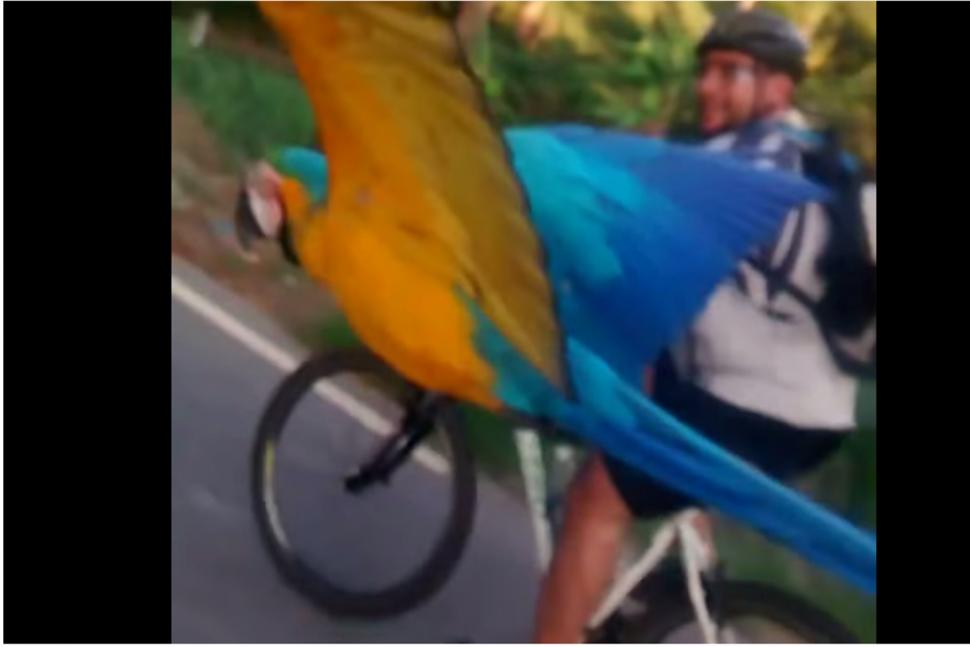 Video round-up: A parrot, a dog, and a Jaguar

Before your eyes, it's the first road.cc video round-up of 2015. And, seeing in the New Year we've got an animal-themed list of videos for you.

First up is a Brazilian parrot whisperer, followed by a terrified and vocally reluctant Boris-biker, a Dalmatian nipping to the shops on a bike, and a cyclist-on-Jaguar incident.

We’re struggling to think of a more idyllic situation than shooting down a long descent through the Brazilian rainforest, accompanied by a majestic parrot gliding by your side.

This fantastic video was filmed by Facebook user Ronaldo Souza, who posted it to the social network along with a caption which said that this was the third time that he had been joined by a parrot, but this time he “finally managed to film [it]”

As you may know, we love a good parrot-themed cycling video here at road.cc. If you missed one of our top stories of 2014 - the driver and his poorly parrot - you can take a look here.

Even seasoned cyclists can be deterred from riding through busy junctions alongside motor traffic, despite Mayor of London Boris Johnson once asserting that gyratories such as Elephant & Castle should hold no problem for confident riders.

The fear in the voice of this Boris-bike riding woman is clear as she rides through Hyde Park Corner, and her tense body language can’t have been helped by the close-passing taxi

There is a safer way for cyclists through the junction - the network of pedestrian and cyclist crossings that surround it - but presumably the woman and her riding companion were unaware of them.

What's not to love about Tron? Whether we're talking about the 80s classic or the 2010 sequel, sharp blue glowy lines and Lycra are a great mix, and have been for decades.

We're clearly not alone in our support of the look. Here you can see 2014 Portuguese Cyclocross champion Marinheiro Ricardo on his Tron-themed mountain bike. We'll let you make your own mind up, but you'll have to excuse me while I measure up my road bike for fluorescent lights and dig out my skinsuit.

Kinfolk is a bicycle brand that spans the Pacific Ocean. Based in the three international cities of Tokyo, Los Angeles, and New York, Kinfolk do bars and bicycles.

This video shows off their Japanese frame builder Osamu Fukuda, who talks about how he’s a third-generation bicycle frame builder, and the benefits of making frames the hard way.

Studded tyres may be overkill during our relatively mild winters, but in other parts of the world they can be pretty important.

See these guys cycling on what appears to be a frozen lake. They’re having a great time, the little girl they hit with the sled not so much.

We’ve had bikes and parrots on this video round-up. But here at road.cc we’re rather partial to a little pedigree dog-on-bike action too.

This time we’ve got a Dalmatian riding to the store to pick up some treats. Yes, it’s a crazy Japanese advert, what else?

In fact the Japanese have a bit of form when it comes to putting Dalmatians in particular on to bicycles; who can forget this classic which we wrote about a few years back?

If you hadn’t realised before you clicked play on the above video, we’re talking about a Jaguars of the vehicular variety here. We’re sorry if this mild deception fooled you.

The incident occurred in suburban America and we're sure scholars of this sort of thing will fill up many a happy hour debating who exactly was at fault - the tricyclist for going rather fast on the sidewalk (you are allowed to do that in some parts of the US) or the motorist for reversing out without being able to see if there was a speeding tricyclist approaching.