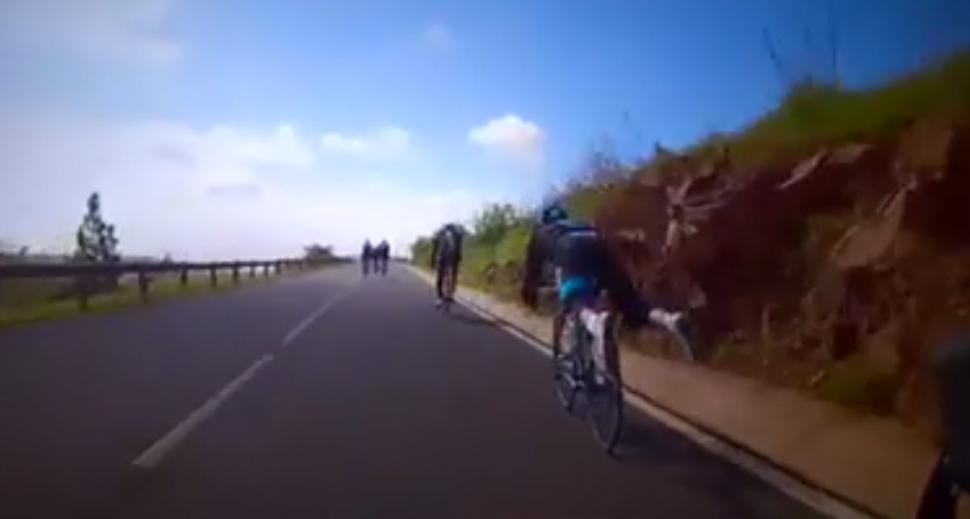 Roll up, roll up, for the road.cc cycling video round-up! As always, we've got a feast of high-octane cycling videos to perk up your tired evening/morning/afternoon eyes.

Chris Froome stars with the video that he uploaded to his Facebook page on Monday. His video features some - in his own words - Team Sky sillybuggers on a rather idyllic-looking descent.

We've got a couple of crash videos for you too, one slightly more severe than the other which we're tempted to believe is a subtle example of attempted insurance fraud - thank god for dashcams, eh?

As if that wasn't enough for you, we've also got some forested cyclocross trail riding, some frozen Finnish cycling poetry, and a lovely little video that's been brought to us by the Pedal on Parliament grass roots cycling campaign.

Generally speaking Froomey's climbing ability is what sets him apart from the field, but - and it's worth noting that we can't confirm that this is actually the Tour do France winner performing these acrobatics - if this is the Kenyan-born Brit, perhaps we've underestimated him.

After watching the Team Sky sillybuggers in the video above, you might have been wondering what state the unidentified acrobat would have found himself in had he falled. Let this video be a lesson in careful descending. Ouch. More than likely ouch moment of the week in fact. It'll take some topping.

From one outrageous crash to another. This time for totally different reasons. Most cyclists are usually going to take their fellow cyclist's side in an argument, especially in an argument involving a bike and car collision… but every now and again as this video from Morrocco demonstrates that isn't so easy. Perhaps this rider was suffering from some sort of delayed reaction or perhaps it was an attempt at an insurance scam. We'll leave you do decide…

Cyclocross bikes are on the up; at least that's the trend that many people in the industry have been observing. With videos like this cropping up, it's easy to see why so many cyclists are plumping for the increased versatility and potential for rides like this one.

Winter's Edge. from I Never Stopped Looking on Vimeo.

From exploring the joys of taking your bike off road and into the forest, to a celebration of the cold. While we're on the way out of our wintery months here in the UK, it's worth looking back and appreciating those cold and often lonely rides for what they were. Here's a poignant extract from the video's Vimeo blurb:

"Even though the town is snow covered, and the days up in the armpit of the Polar Circle are still lived in below freezing temperatures, the appearance of tarmac from underneath the cold, soft white matter presents a faint promise of something nice to come...

"While we all live our lives, eagerly awaiting for the warm summer breeze whistling through the spokes, the caress of the sun on bare skin, the freedom of movement – oblivious of the world around us, we can only remember the past"

Finally the Scottish grass roots cycling movement, Pedal on Parliament, have produced a beautiful stop motion animation of a young girl's experience riding her bike to and from school, why she does it, and why she loves it.

Pedal on Parliament are planning their fourth demonstration on the Scottish Parliament on April 25, to find out more you can visit their website by following this link, here.