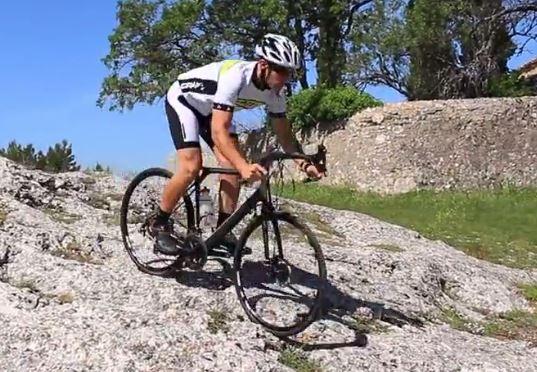 If you’ve been paying attention to developments in the bike world over the last year or two you’ll know that gravel bikes are very much ‘a thing’ as they say.

Whereas once upon a time you might use a CX bike to throw over rough terrain, now frame manufacturers have come across something more specific to your needs when it’s rough roads, rather than mud, that you’re facing.

Here’s a video from Provence in the south of France showing the GT Grade (which we had a look at last year and is pitched as a bit more of an all-rounder than simply a gravel bike) being put through its paces – on-road, off-road, and even on the slopes of Mont Ventoux.

Gravel bike from provenceallbikes.com on Vimeo.

As the blurb accompanying the Vimeo clip says, “Far from worrying about whether a road, cyclo-cross or all-terrain bike was better, it helps me ride almost without limits, without constraints, there are no more barriers …. Truly, an absolute favourite, a real ‘EnduRoad’.”

For those of us in Europe, gravel bikes are a relatively new thing, but they’ve been around for about five years and have grown up as a sport in their own right in parts of the US where there are gravel roads.

They’ve been taken up by the industry because the bikes are so tough and adaptable. The Jamis we reviewed yesterday is an evolution of the gravel bike. Their main distinguishing characteristic is that you can ride them off road and they take big tyres.

They tend to have disc brakes too and a long wheel base. Mind you, those are all things you could say about a cross bike too … so time will tell whether it’s a true evolution, or if they’ll just be a passing fad that ends up in the wider CX category.