Dahon probably make more folding bikes for more manufacturers than anyone else and they're constantly updating their range. New kid on the block at Eurobike this year is the Vector, a hydroformed aluminium folding platform.

We spoke to Josh Hon on the Dahon stand who was very keen to talk us through the new model. Eventually the Vector frame will replace the Mju across the range but for 2011 Dahon have concentrated on the higher end of the folding spectrum, with three models – the Vector X10, X20 and X27 – that start at €1,399 for the ten speed machine.

'The Vector is the stiffest, strongest frame of this type we've ever made', Josh told us. 'We use hydroformed tubes, and both the tubes and the hinge itself are larger than on the frame the Vector replaces'. It's a curvier beast too, with a more pleasing profile than the Mju, and also a smaller fold. 'We turn the wheel 180 degrees in the fold, so instead of a 40mm forward rake the wheel is pointing backwards', Josh explained, 'so the footprint is a bit smaller'. As ever there's some neat touches, such as a clamp that locks the front wheel in place once it's rotated. 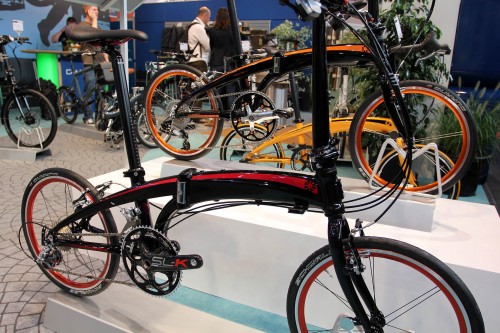 Componentry-wise, the rationale was simple for the first three models: 'essentially the best of what we could find, everything from the CNC machined cartridge pads to SRAM Red' . Certainly there's not much compromise on price for the first incarnation of the Vector, with plenty of kit that wouldn't look out of place on a good road bike. 'We wanted to make an incredibly fast high end urban bike', Josh told us, and it certainly looks the part although we weren't allowed to take one outside for a spin to confirm... 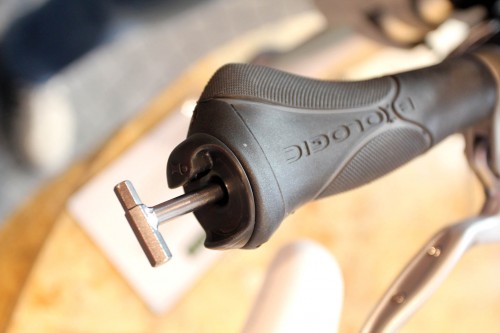 The other big news on the Dahon stand was the expanded Biologic range. From the iPhone mount and charger that Dahon developed for use with the IOS the brand has grown and now there's lots of other clever and useful stuff. Dahon's Zorin seatpost pump comes bundled with all their folders but now you can have one for your road bike too, as it's available in standard 27.2mm and 31.6mm sizes as well as the larger folding post diameters. Other clever bits and bobs include a set of ergo grips with a 4/5/6mm allen key tool hidden in the end, a brake lever with an integrated bell and a vacuum flask for your coffee that'll fit in a standard cage. There's also a velcro-on bottle cage, and Dahon have also licensed Air Zound's bike horn technology so they're selling a Biologic branded version of that system. You can get speakers for your social ride too.