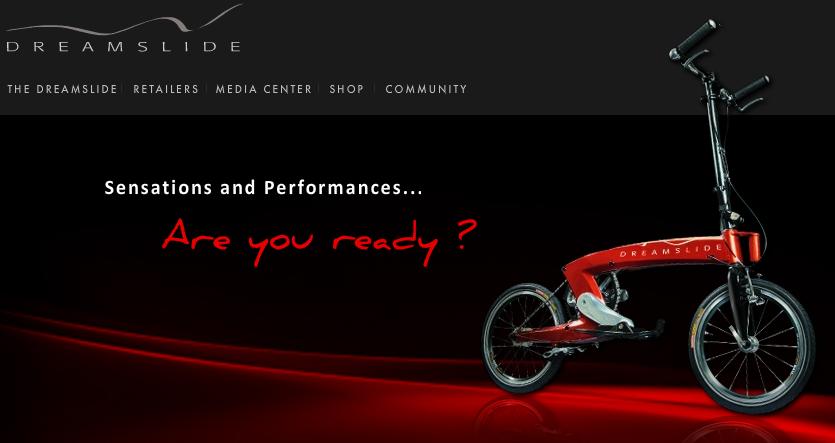 Imagine if riding a bike were more like skiing, but without the snow. And the skis. And with more wheels.
by dave atkinson

Eurobike's full of bikes – and I use the word advisedly – like the Dreamslide. The essential mechanical and geometrical make-up of the bike has changed very little since the first one was made, and there's a good reason for that: it was pretty much spot on right away, and is unlikely to be significantly bettered. Despite that there's a small army of tinkerers from all over the globe who are convinced that we can develop new, better things. Things like bikes, but without a saddle. Or pedals. Or handlebars. Or whatever.

Eurobike's full of these odd relations to the humble bike. You see them generally at the backs of the halls; ostensibly because that means you can nip out to the car park for a go on one but really because that's where everyone's decided that's where they belong. You will see at least one of them winning a gong at the much-derided Eurobike awards every year as well, rather spoiling it for the people who have genuinely interesting and innovative stuff winning recognition.

So then, the Dreamslide. "The basic idea is that the user should view this machine as an extension of his or her body; a sort of amplifier of the person's own natural locomotion capabilities, without the cumbersome aspect of an ordinary bicycle", goes the back story. The Dreamslide has been in development for six years. If only riding a bike could be more like rollerblading or skiing, then that would be a good thing, right? Wrong. The main issues of urban cycling in this country seem to less about how unlike rollerblading and skiing it is, and more about getting left-hooked by a cement lorry, or abused by a road-tax-paying [sic] white van driver, or taken out by an iPed in a trance. Maybe, if the whole of our urban space consisted of flat, wide spaces connecting coffee shops. Maybe then. But probably not.

To be fair to the Dreamslide, it's not the worst offender. There's a stepper bike that's been consistently underwhelming the crowds at Eurobike for as long as we can remember going. And new to the party this year was the cross training tricycle which, if we recall correctly, really did win an award of some kind. Though that may be wishful thinking on our part.

Normal service – and bikes – will be resumed tomorrow. For more on Dreamslide, head to www.dreamslide.com