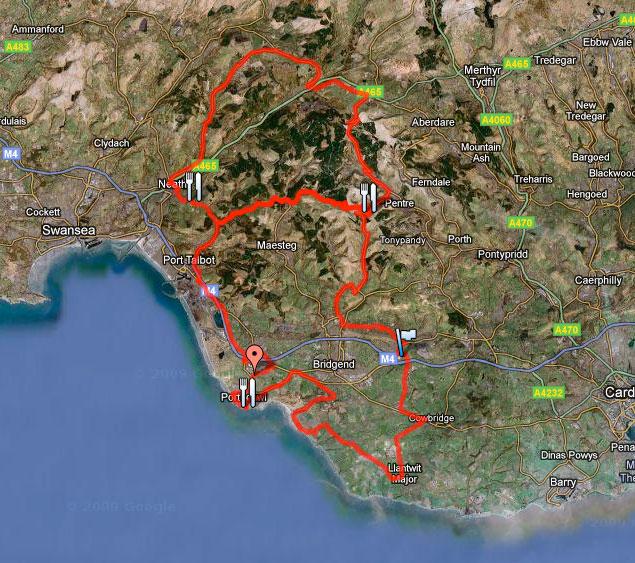 The Verenti Dragon ride 2011 details have been announced, and though the routes are still provisional it looks like there's going to be some major changes in 2011, with the Gran Fondo missing out the Beacons/Crai reservoirs section in favour of a coastal loop right at the start.

"The coastline to the south of the M4 in this part of South Wales is spectacular and for a few years we’ve wanted to send the Dragon Ride this way", organiser Lou Lusardi told us. "Also since the ride moved from Bridgend to Pencoed we’ve always had some element of conflict between entrants trying to access the car park and riders leaving the start. The new route avoids this by heading south from the start, a right turn instead of a left. The Grand Fondo route however still includes the iconic climbs of the Bwlch and Rhigos mountains, both climbed from the most difficult sides"

What this means in practice is that all three routes first head south, crossing the M4 and hitting a few minor climbs as the Dragon heads for the coast. A right turn at Llantwit Major will take the riders along the lanes to Ogmore by Sea, and round the Ogmore estuary before the first feed stop at Porthcawl.

After the stop the Corto route heads back to base whilst the Medio and Gran Fondo riders nip up the M4 corridor to Port Talbot where they're treated to the full ascent of the Bwlch; from the town (more or less at sea level) to the top of the climb (532m) is 23km of more or less continuous climbing. It's mostly fairly gentle but ramps up towards the summit. From there the Medio route heads back, while the Gran Fondo goes over the Rhigos. A left instead of a right at the bottom of the descent takes you to Glyn-Neath, from where the new route meets up with the old one, heading down the Dulais valley towards Neath before another go at the Bwlch and the return leg via the final climb at Llangeinor.

So what does this mean in terms of ride quality, length and difficulty? Well, the organisers claim that the new route will push the total distance over 200km, which will please anyone who's gone up and down the dual carriageway a couple of times at the end of the Dragon to push their kilometerage over the double hundred (Just you, Dave... Ed) They also claim that there's 3,000m of climbing in the new route, but our quick and dirty recreation of the route in the normally reliable Bikehike puts the climbing total at about 2,600m, less than in previous years. Certainly we'd be surprised if the new loop contained as much climbing as the slog over the tops to the Beacons reservoir followed by the climb past Crai and back down to Abercraf, which is the section missing from the new route. We've included a GPX file of the route as we understand it at the bottom of this page, although it's still subject to change.

Also – and more importantly from our point of view – the new route means you do the Bwlch twice from the same side. The great thing about the Bwlch is there's three ways to the top, and the old route made good use of that fact; it's disappointing that you'll be riding the same stretch of tarmac twice in the same direction when there's so many good roads in the area. Since we haven't ridden the new coastal section, the views from which we're promised are 'breathtaking' (and we can imagine they are), we're unsure as to whether the trade-off is worth it. I guess we'll have to send someone to have a recce. The other big change is that the Medio route now misses out the Rhigos, which will be a big disappointment to anyone who doesn't fancy the long route; although there's only 200m less climbing in total you're only getting one of the two signature climbs.

Anyway, whatever the merits or otherwise of the new route the Dragon is very likely to be a sell-out, even with the increased capacity of 4,000 for this year. If you want to get a place you'll need to get yourself online pretty smartish once entries open, and we can confirm that'll be happening at midnight on 29 December: put it in your calendar and set your alarm clock.

For more info head over to www.verentidragonride.com