To London for the Charge 2012 launch… Planet Bike operating as it does to a very different calendar. Happy New Year! Charge rang in the new year in the swanky surroundings of the Conran Shop with some interesting changes to their line-up which add up to fewer Plugs, more women's urban bikes, some new urban MTBs, and some very aggressive pricing… in a good way. Anything else? Yes, a new Filter at a very Cyclescheme friendly price point – it's a looker too, the very interesting Scissor a sort of super-evolved Plug Freestyler, and a pointer to the future of the Plug. 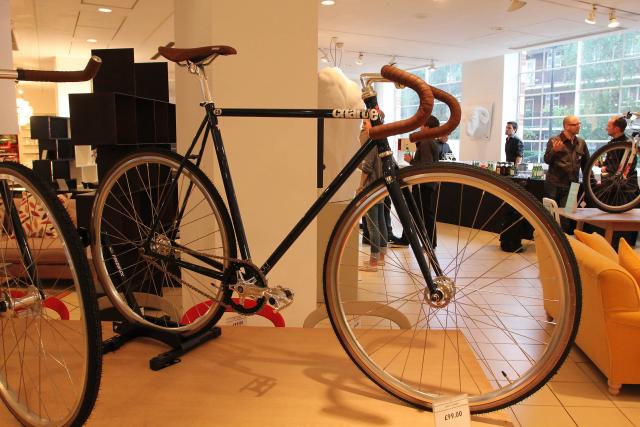 First off, let's mention absent friends, the Plug Grinder and Freestyler have left the building, the Plug line-up has been cut to just two bikes: The Plug; and the Plug Prestige. Charge were in to the the emerging fixed scene  so early that many people don't realise that at heart they are a bunch of West Country mountain bikers rather than Hoxton hipsters – so it's significant that they are scaling back on their iconic fixed. Of course London is never going to run out of graphic designers in need of fashionable, yet utilitarian, urban transport that er, puts the funk in to functional… but they've moved on and Charge is moving with them but more of that in a mo.

Charge may be scaling back on the number of fixed and singlespeeds they're offering but that doesn't mean that the Plug is being neglected, far from it . For 2012 it could be argued that both Plugs are brought back closer to the original vision for the bike, which means simple understated lines - the new Plugs both come with quill steams, (a particularly good looking one on the Prestige), a classic colour scheme and good value - they are substantially cheaper than the 2011 version. The guys from Charge reckon the Plug Prestige manages the neat trick of being both an up-spec on current models and be cheaper too. The standard Plug comes in at £150 less than the equivalent current models while the Plug Prestige is £50 less.. 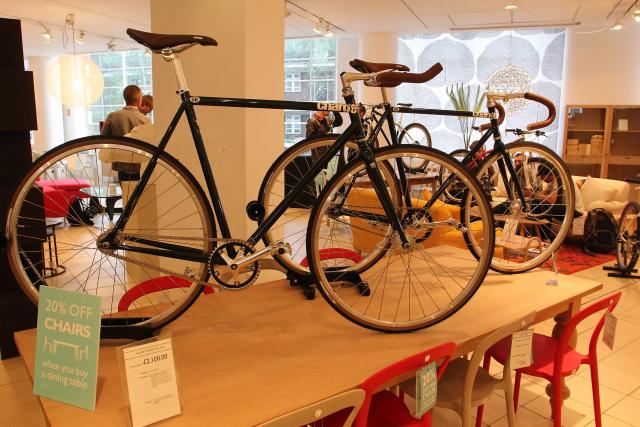 Charge have achieved this by changing the specs and changing suppliers. So the standard Plug is no-longer Tange plain gauge chromoly, instead it's a mixture of chromoly with a couple of Hi ten steel tube thrown in to the mix - although Charge are quick to point out that the finished bike is no heavier than the machine it replaces - indeed the Prestige is lighter. The Sugino crankset on both machines is replaced by an own branded Charge one - the one on the Prestige is made by FSA and bears more than a passing resemblance to FSA's own Gimondi crankiest - nice detailing on the chainring bolts - ditto for the quill stem on the Prestige. The tubeset on the Prestige is full Tange Prestige butted chromoly (hence the name we're guessing) both come with Charge Spoon saddles, the Prestige goes with own branded drop bars while the Plug gets Slice bars, the Plug is expected to sell for £399 while the Plug Prestige will be £549, and they should be hitting the shops in early autumn. Aside from the two 2012 Plugs we also get a peak at what 2013 has in store for the Charge's flagship urban singlepeed in the shape of the Conran Plug - only available via Conran shops around the world (there's a Conran Hob3 too), and what's different about that? Well, it's a Plug with gears - a Sturmey 3-spd to be precise. Word is we can expect a similar addition to the Charge lineup next year. In the meantime if you simply must have a Plug with gears then nip along to your local Conran shop. 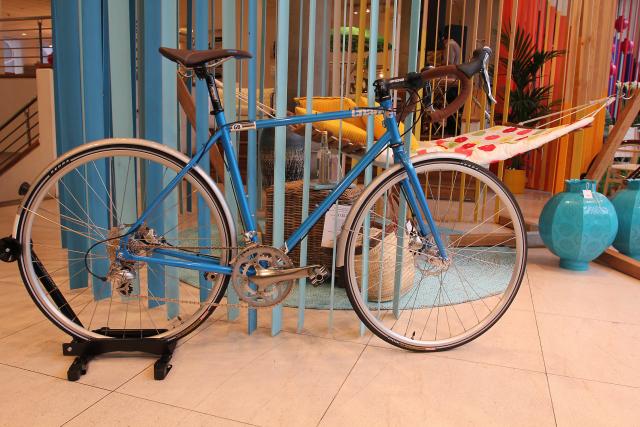 This year they've added a new bike to the range the Filter Hi… hang on, well the name's the same but this is a new model, what was the Hi now becomes the Filter Apex on account of its 10 speed SRAM Apex groupset. The problem for charge with the old Filter Hi wasn't the bike itself, but the fact that at £1199.99 it overshot the all important cycle to work scheme £1000 limit. The new Hi addresses that.

For £999.99 you get that Filter frame in a very eye-catching blue with colour co-ordinated silver mudguards Tektro Lyra cable disc brakes (an upgrade on the 2011 Hi which comes with SRAM Apex cantis) and a Shimano Tiagra 10speed drivetrain comprising a compact chainset matched to an 11-25 rear cassette. The Filter Apex by contrast gets Avid BB5 Road discs, lighter wheels and Kenda Small Block Eight cyclo-cross tyres - the other two Filters get Kenda Kwick Roller Sport tyres - more commuter capable rubber, but then you're unlikely to be tackling a 'cross course with a bike sporting a set of mudguards either. Of course you could take 'em off.

There are changes to the Filter mid too - that stays with rim brakes Tektro CR710 rather than last years non series Shimano ones, with Tiagra hubs replacing the Charge ones on the 2011 model that though enables an upgrade to the drivetrain from non-series Shimano to Shimano Sora - which we'd say is a sensible way to go, it certainly makes the Filter Mid look more worth its £799.99 price tag. 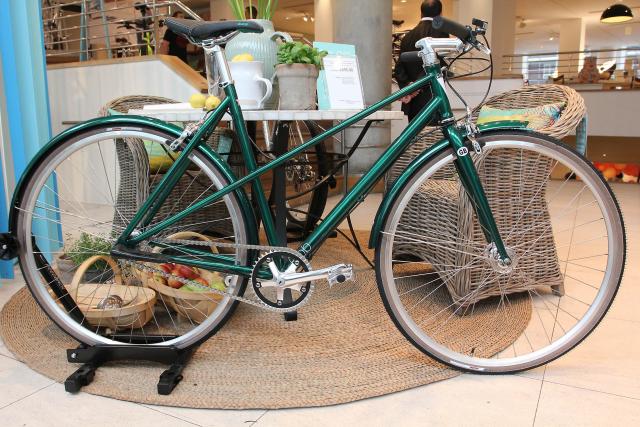 Fair to say we were pretty smitten with the Hob when we saw it at last year's Charge launch but did wonder why they didn't offer it with a hub gear. The guys at Charge admitted that this thought also occurred to them as soon as they launched it… so now they do.

The Hob 3 is the same gorgeous Hob chromoly steel frame but with the addition of a Sturmey 3 Spd hub matched up to the same Charge 42T crankset as on the singlespeed Hob. Oh, and it's green not red - apparently the colour of the original Hob was thought to look like an apple so they carried on that theme with the Hob 3. Colour, extra gears, and price aside everything else about the two bikes is the same. Unlike the Decanter and Mandoline the Hobs get slightly sportier saddles, the Charge Ladle, and Tektro R316 canti brakes. Oh, and for 2012 both Hobs come with rack mounts too.

1
Tubolito unveils ‘unpuncturable’ inner tube with one year warranty against flats
2
More bike parts supply chain problems loom as Shimano factory shut down temporarily
3
Five cool things coming soon from Campagnolo, Giant, dhb, MAAP and Ale
4
Pothole reportedly caused crash in which e-bike rider died
5
Kickstarter campaign cancelled for kit available only to those who ride fast enough
6
WiggleCRC to be taken over by German online giant
7
Rider thrown off Baloise Belgium Tour for using illegal handlebars allowing him to rest his arms on them
8
Updated: Sheldon Brown’s website to continue despite bike shop where he worked closing down