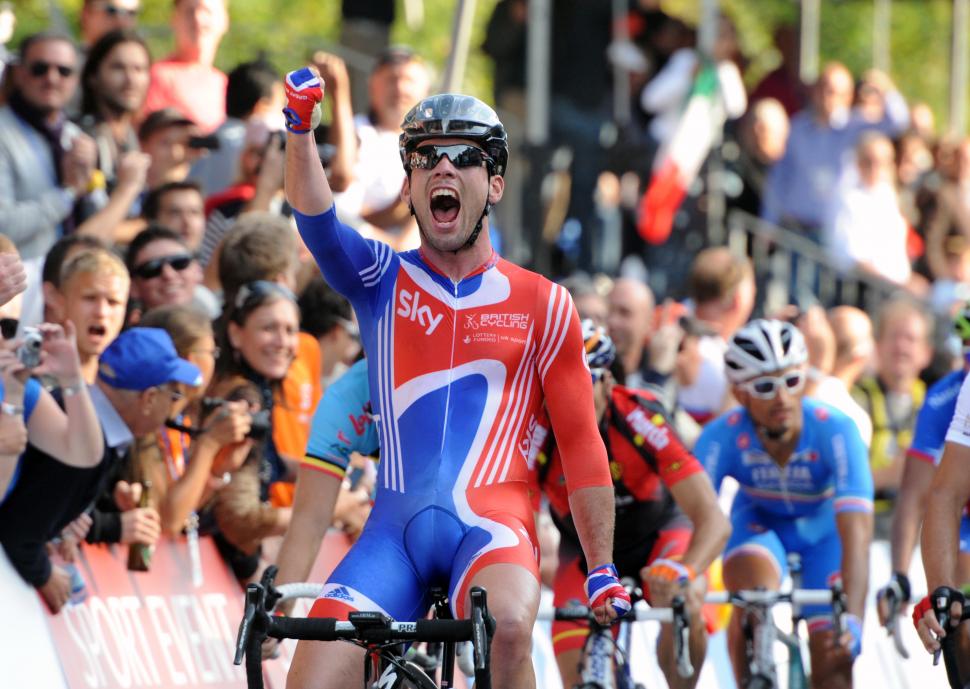 It's the Queen's Diamond Jubilee next year - last time GB was such a world power on the road, it was Queen Victoria's...
by Simon_MacMichael

Mark Cavendish’s victory in the world road race championship in Denmark yesterday is the crowning achievement of a year that is without doubt the most successful ever for Britain’s male cyclists on the road. It’s one, however, that history may end up viewing as just the start of a golden age for the country’s top riders.

While Cavendish achieved his two aims for the year – winning the green points jersey in July’s Tour de France and becoming only the second British male pro to take the rainbow jersey, the other of course being Tom Simpson – other riders have also been enjoying a great year on the road, in some cases giving a glimpse of their potential to win big races in the years ahead.

Britain has strength in depth in a number of disciplines – track being the highest profile, but also BMX, downhill and the woman’s events on the road, with medals picked up in the latter in all age groups at Copenhagen – but this year underlines that Britain’s men have emerged as one of the strongest forces on the men’s road scene.

How one goes about quantifying their success is another matter, though. Currently, the country sits in a dizzying fifth place in the UCI WorldTour ranking, above the likes of the Netherlands, Germany, France and the United States, following a year that has demonstrated the real strength in depth the country has now acquired.

Nine stage victories in the three Grand Tours by three different riders – Cavendish with two in the Giro d’Italia and five in the Tour de France, plus David Millar’s time trial victory in the Giro and Chris Froome’s stunning win on the Peña Cabarga during the Vuelta – is one measure.

Staying with the Grand Tours, there is the array of jerseys worn by different British riders during the trio of three-week races, with four British riders in the overall lead of one of them at some point, a record only Spain matched this year.

The Giro saw Cavendish in the maglia rosa during the ill-fated Stage 3, ceding the jersey that evening to Millar, who thereby found himself leading the peloton the following day in its response to the tragic death of Leopard-Trek’s Wouter Weylandt.

In the Vuelta, meanwhile, it was Froome who upset the order at Team Sky by finishing second to Tony Martin in the Stage 10 time trial in Salamanca, and thereby taking the leader’s red jersey ahead of his team leader, Bradley Wiggins.

The latter would become the fourth British rider to lead a Grand Tour this year before Geox-TMC’s Juan Jose Cobo took the jersey for good on Stage 15, ending the race just 13 seconds ahead of Froome, with Wiggins a further 1 minute 26 seconds back in third.

That itself marked another unprecedented achievement for British cyclists – getting two men onto the podium of a Grand Tour, with Froome also equalling Robert Millar’s highest ever position by a Briton in one of those three races.

Debate continues to rage about what might have happened if Team Sky had ridden for Froome, not Wiggins, once he took the red jersey after that time trial, with some speculating that he could have become the country’s first Grand Tour winner.

In the Tour de France, newly crowned British champion Wiggins of course crashed out with a broken collarbone at the end of the first week, and that day saw team mate Geraint Thomas cede the best young rider’s jersey he had sported since the opening day.

Later in the race, given free rein to attack, the Welshman would be leading the Tour de France up the Tourmalet on a day when he came off the road twice, and scoop the day’s combativity prize.

Cavendish, meanwhile, would rack up five stage wins during the Tour, including taking the sprint on the Champs-Elsysées for an unprecedented third year in a row and with it the green jersey he so coveted.

In the 2010 Vuelta, he had become only the second British rider to win a Grand Tour points jersey, as Malcolm Elliott had done in 1989; now, he would join 1984 King of the Mountains Robert Millar as the only man from these islands to win a jersey of any description in the Tour de France.

Away from the Grand Tours, Wiggins had confirmed his own pre-Tour de France form with the biggest road win of his career in the Criterium du Dauphiné, a race in which Thomas, who had earlier won his first stage race, the Bayern Rundfahrt, put in an assured performance on behalf of his team leader.

Earlier in the season, the Welshman had also placed in the top ten of the race he would most like to win, the Tour of Flanders, which followed a second place in the Dwars Door Vlaanderen, confirming his Classics credentials for the future – although next year, the focus will be on retaining his Olympic title in the team pursuit.

Other members of the team that supported Cavendish yesterday carved out notable results this season too. Just last week, Steve Cummings finished second overall in the Tour of Britain, the same position he achieved in 2008, and the highest by a British rider since the race was revived in 2004.

The experienced Jeremy Hunt, switching to Team Sky from Cervelo TestTeam, got his first win in two years with the East Yorkshire Cycle Classic, while Ian Stannard impressed with his attack at Gent-Wevelgem and later picked up his debut professional victory in the Tour of Austria.

Away from the team that supported Cavendish yesterday, Team Sky sprinter Ben Swift got the country’s first ranking points of the season after winning two stages of the Tour Down Under and also won stages in the Vuelta a Castilla y León, the Tour de Romandie and, perhaps most impressively, the Tour of California.

Swift is just 23 years old, but two riders who are younger still also picked up ranking points during the year, his team mate at Sky, Peter Kennaugh, plus Adam Blythe of Omega Pharma Lotto.

With Alex Dowsett winning the time trial stage of the Tour of Britain and Andy Fenn picking up bronze last week in the world under-23 road race, the conveyor belt producing British talent would appear to be running as smoothly as ever – although as far as those like Dowsett and Swift who are at Team Sky are concerned, there is the issue of how they might view their opportunities should Cavendish, as has been strongly rumoured, moves to the British outfit.

As the new world champion was quick to point out yesterday, his win was the culmination of three years of planning by British Cycling, and the fact he had seven team mates to support him had been due to the efforts his fellow Britons had made in amassing UCI WorldTour ranking points.

On the one hand, that is a reflection of the meticulous planning by British Cycling that has brought the country so much success on the track; on the other, it is a reflection that the winning mentality on the track has, in part due to the creation of Team Sky, been successfully translated onto the road.

The year 2012, of course, will be a very special one for British riders, with a unique chance for the current generation of riders to participate in a home Olympics, and the London 2012 road race is Cavendish’s big target for the year.

Great Britain will qualify a maximum five riders for the race, and with Wiggins focusing on the time trial, Thomas concentrating on the track and Millar barred from selection due to his ban for doping, those remaining four places will be hotly contested.

As for 1965, the year in which Simpson, who would die two years later in the searing heat of Mont Ventoux, won his world champion’s jersey?

Well, that year saw another British rider, Michael Wright, win a stage of the Tour de France in the colours of Wiel's-Groene Leeuw, while on the road, Simpson would add just one victory to his world title, but a prestigious one at that, the Giro di Lombardia.

Barry Hoban’s Tour de France success over the next decade apart, people forget that when Simpson won, it was seen as the culmination of Great Britain’s re-emergence as a road racing power following on from half a century when massed start road racing had been banned on Britain's roads.