Interbike Pt 1 – the weird and the wonderful, but mostly the weird

Interbike in Vegas has never really been a road show, sure they have road bikes there, but the emphasis has always been more on mountain bikes and these days most of the top road stuff will already have been seen at Eurobike. Most, but not all, as this year proved with the Cervelo P4 making its debut in Vegas. Mark and Chipps from our partner site Singletrack have selflessly volunteered to brave the sun, free booze and general decadence of Las Vegas to not only look at all the new mountain bikes, it's a tough job etc, watch Lance compete in a cyclo cross race (he came 9th, which was mightily impressive says Mark); but also keep an eye out for interesting road stuff. Here's what the Demo day and Day 1 in the hall yielded… 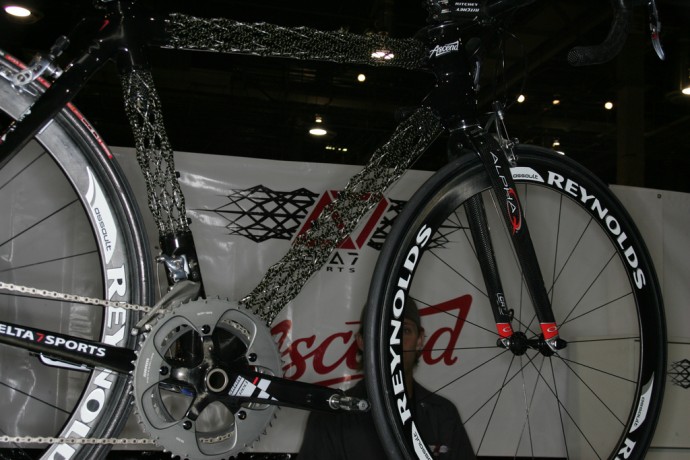 At first sight the Ascend looks like one of those WTF bikes you always get at shows, but we're nothing if not broad-minded. These guys have been selling a mountain bike for the last couple of years… and now they've come up with a road bike. Here's what they have to say about it: "At 1.8 pounds and $5,995 for the Ascend frame, Delta 7 Sports introduces what it believes is the strongest road bike in its weight class, a "superior race machine that's solid under sprint forces". Okaaaay. The bike is built from Iso-Truss based structures - essentially pyramids of trusses (the idea comes from architecture and the Iso-Truss was developed by a professor of civil engineering). In the bike frame the trusses are formed from metal mandrils with carbon fibres wrapped around them which then have a further layer of Kevlar added over the top - the whole lot is then baked for four hours, and the resultant structure is, say the makers, both very light and very strong. They also say that if has slightly less drag than a normal cylindrically framed machine. Mind you, there aren't many of those about these days. Sublime or ridiculous? Without riding one, or without knowing anything about the properties of Iso Trusses it's very hard to make a call on whether this is so much marketing BS or a serious bike worth considering. Hopefully the latter… cos we're just big kids around here. For more info on Iso Trusses visit http://www.isotruss.org.

Next up, some definite sublimeness – the Salsa Pistola is definitely sublime. It's the US steel-meister's take on a frame for century rides – so ideal for sportives. The frame is made from True Temper OX Platinum tubing, paired with an Alpha Q CS10 fork with OX Platinum steerer tube. The tubes are double butted and also size specific – so more butting for lighter lads and lasses less for you big types. The accent is very much on giving a balance of efficiency, comfort and smoothness that makes long rides a joy rather than a chore. The Pistola will be available in February and it's already on our wish list.

Now, a couple of singlespeed/fixies. First up the Cannondale Pinkenger – not sure if that's it's official name, but that's what Mark and Chipps dubbed it and you can't argue that it's not appropriate. What we have here is one of Cannondale's Six, carbon/alu frames minus gears but plus lots of extra pinkness – they'd made their point with the bar-tape and rims really chaps isn't the saddle just a step too far? Obviously we want one.

Next, the Soulcraft Alma Pura, dunno what it was, but Chipps just couldn't seem to maintain the necessary distance that all us journos have to keep between us and the subject, even when it's a bike… especially when it's a bike. Maybe it was the combination of steel and orangeness? Understandable, even more so when you realise that this is a limited edition bike built by US frame-building legend Ross Shafer who taught Soulcraft supremo, Sean Wallings to build frames . What you get is a beautifully built traditional lugged steel frame made to measure but with hardly any options – maybe you can drop the bottle bosses, but that's about it. Oh, and it might take a while, but it will be perfect. For more information check out the Soulcraft website– they come across as a very sound outfit.

Speaking of Salsa and steel, remember the Salsa Fargo “extreme tourer” we spotted at Eurobike, well, Chipps got to ride on at the Demo day. Here's what he had to say, “Out on the trail, the Fargo rides like a mountain bike, rather than a 'cross bike with bike tyres.” Not sure if that's a good thing or not. “ A very impressive ride”. That clears that up then. Thanks Chipps. We've had weirdness, we've had steel… let's end with some reassuringly high end custom carbon from Parlee… with a really weird paint job. We saw this one at Eurobike…

…and here it is again. We'd like to think someone from Parlee rode it all the way, possibly in one of those Cipo flayed man bodysuits, but somehow we doubt it. Shame. For lots more Interbike pics along with witty and infomative (no, really) captions check out our Interbike gallery. More from Vegas soon.

1
Police chief says clip of Range Rover driver hitting cyclist with car doesn’t tell full story
2
Near Miss of the Day 813: Audi driver passes oncoming cyclist at speed on narrow country lane
3
Near Miss of the Day 812: Van driver hits cyclist during impatient overtake on country lane
4
Near Miss of the Day 810: Reckless overtake towards oncoming cyclist and bus… and some afters from the impatient driver
5
Drug driver sentenced to 21 months in prison for killing cyclist – seconds after using his phone to text friend
6
You can be the first to own the new Colnago Prototipo… but it’ll cost you – plus more tech news from SRAM, Pirelli, Brompton, Apidura and more
7
Government to crack down on “reckless” riders with causing death by dangerous cycling law
8
Police officer dishes out fines to cyclists – then crashes his SUV into one in a cycle lane