Cinelli 2013: Laser Viva (like the original but carbon… with gears) + The Very Best Of & more

There are lots of iconic bikes - and bike names - in cycling and the Cinelli Laser is undoubtedly one of them. Launched in the early 1980s as an aero track bike, Cinelli offered it in various incarnations (always in its trademark metallic blue). Last year, for those with pockets deep enough, they produced the Laser Nostra a limited edition homage to the original Laser Pista.

The Nostra was a steel bike that looked like carbon. This year they've gone the whole hog and re-designed it in carbon, with gears, as the Cinelli Laser Viva. 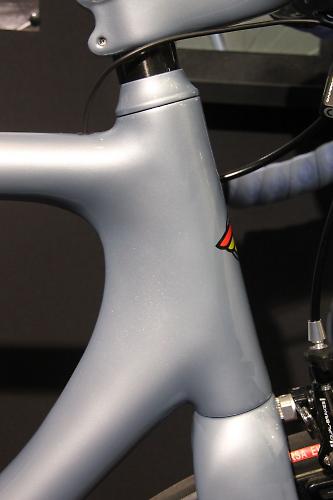 The original Laser was a strikingly dramatic bicycle that was designed for the track and time trialling. It featured a short head tube that involved miniaturisation of the steering components to give the rider an improved aerodynamic position. It was also one of the first road frames to have an integrated stem and internal cable routing. 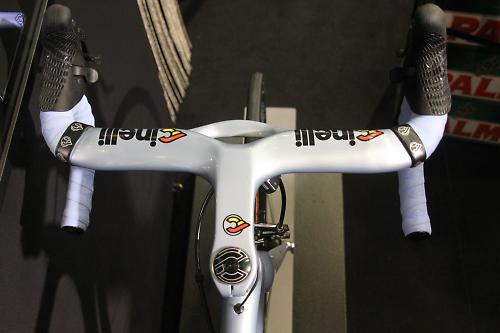 The original bike was built in response to the UCI's declaration that aerodynamic features must be an integral part of the frame and fork (so no aero fairings or wheel covers). Cinelli were one of the first to make a production bicycle with incorporated aerodynamic features - so it had one of the first examples of an integrated stem and handlebar design, something that is starting to become a common sight with the latest time trial bikes and, increasingly, road bikes like the Look 695 and the 675. 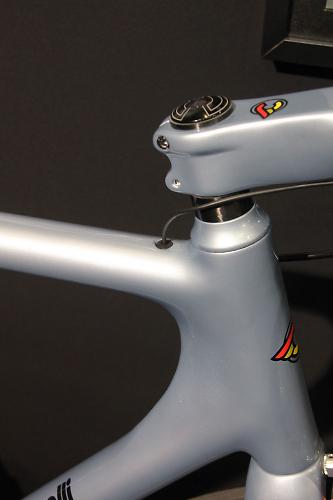 For the project to bring the Laser back in carbon fibre, Cinelli brought together the same designers that created the first Laser twenty years ago: Andrea Pesenti, Antonio Colombo and Paolo Erzegovesi. They've re-imagined the original for the modern era using the latest materials technology at their disposal, which means a fully carbon fibre interpretation of the original. 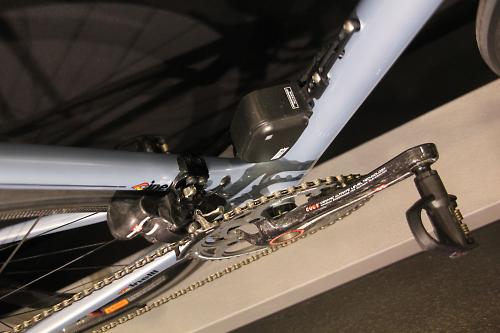 The famous lower fin below the bottom bracket gives the frame an unmistakeable presence, as do the narrow diameter tubes and aero shaped fork blades. The seat tube is offset to shorten the chainstays for snappy handling. Cinelli will supply each frame with adapters for internal routing for electronic groupsets. Sizes will be available from 48 to 62cm in 1cm increments. The frame is painted in the same Laser Blue as the original, of course - though it's bloomin' hard to make it look blue when you're photographing it.

No word yet on whether the Laser Viva will simply be a limited edition or whether it will go into full production - the fact that it is being made in carbon suggests the latter. Once you've paid for the moulds to be made you might as well get your money's worth. If the Laser Viva does go into production, will it slot in above or below their current 2013 range-topper, The Very Best Of? Which brings us to… 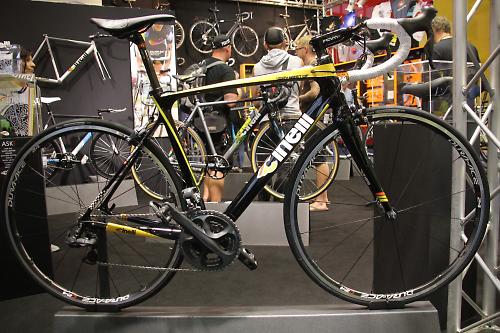 The Very Best of 2013 sounds like a New Year's Eve TV programme. This one, though, is Cinelli's top-of-the-range race bike - like Cinelli, we'll refer to it as the VBO from here on in.

Cinelli list the VBO's frameweight as 925g although they don't say which size that applies to - we'll guess the medium - 51. The bike is available in five frame sizes from XS (46cm) through to XL (57cm). Cinelli worked together on the frame with Columbus Carbon LAB - Columbus at one point owned Cinelli. Now both are part of part of a bigger company. 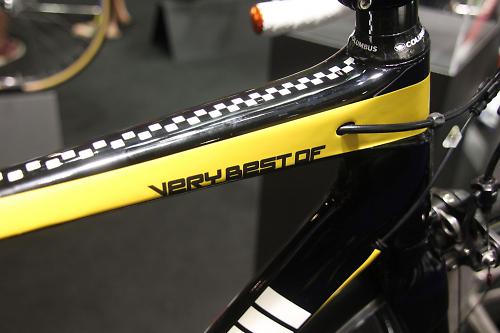 The frame itself is made from T700 high modulus carbon in the monocoque stylee… which in bike industry terms means it's more than one monocoque stuck together. All cables are internally routed including inside the oversize all carbon bottom bracket shell. Doing that adds extra aero slipperiness, according to Cinelli.

Cinelli put a lot of emphasis on maintaining a 60:40 ratio between the downtube and top tube to relieve some of the stresses going through the down tube, particularly when braking sharply. Combined with the slight curve of the monocoque fork blades, Cinellis say this adds significantly to steering control. 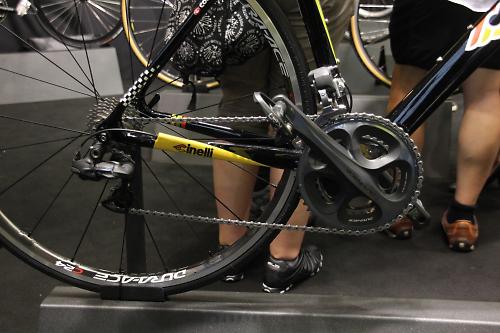 Asymmetric chainstays are an of-the-moment feature. The chunkier driveside stay is designed to combine with the bottom bracket to increase lateral stiffness and pedalling efficiency while the slimmer non-driveside stay is where you slot your Campag EPS or Shimano Di2 battery. 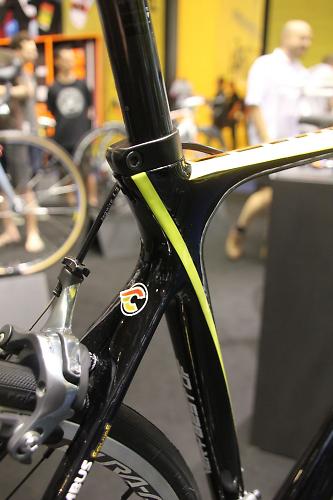 They've also taken a look at the stresses going through the seat tube junction area too, so the seat tube itself flares out and is slightly over-built at the top while the stays are slimmed right down to add some vertical flex where they meet the main frame. The seatstays connect to the top tube rather than the seat tube in order to direct shocks and vibrations away from the rider. A 27.2mm seat post contributes to the comfort factor. 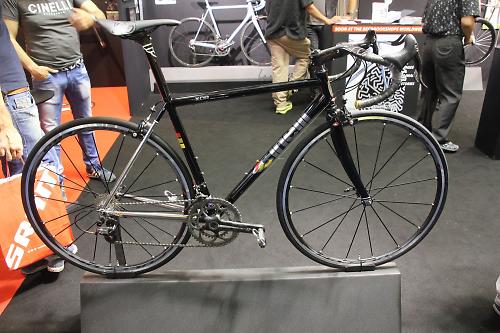 Elsewhere in the Cinelli range is the lovely Xcr road bike painted black for 2013. It's been a fave of ours for a while (we saw it last year) and it still looks gorgeous. The triple-butted frame hasn't changed on the inside but outside it's now finished in a lovely painted finish, the raw rear stays contrasting nicely with the painted front triangle and matching fork. 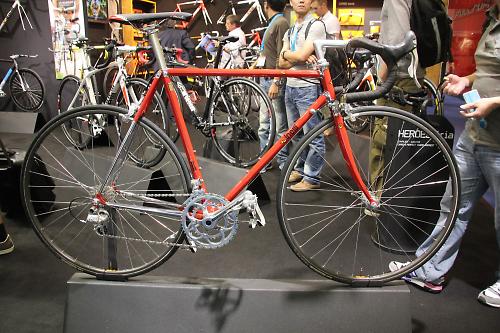 While the Laser has been a Cinelli classic for 20 years, the Supercorsa is THE classic Cinelli. It has been in their range since 1948. Its traditional lugged construction gives a thoroughly classic look and it uses a Columbus SL tubeset with chromium-plated joints - and the current version still uses the original Cini Cinelli design for the seat stay. Eight colours to choose from including… curry. 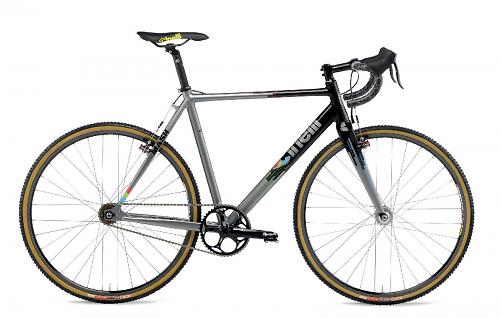 Finally, we'll end this article with a look at the MASH SSCX singlespeed cyclo-cross frameset. It's the second frame (the first was a road going fixed wheel frame) developed in collaboration with San Franciso's MASH cycling team.

It's a 'cross bike with mud clearance and space for fat tyres but with the simplicity of a single sprocket out back. It has a Columbus Zonal triple butted aluminium tubeset with a carbon fibre fork and 120mm rear hub spacing. We like.