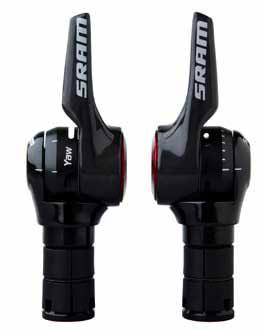 New kit for time trialists and triathletes
by Mat Brett

SRAM are launching R2C bar-end shifters and Aero Chainrings to work with the Red Yaw technology that they introduced on their top-end groupset earlier in the year.

The R2C (Return to Center) bar-end shifters for time trialists and triathletes have been around for a couple of years but they have now been redesigned to work with the SRAM Red Yaw front mech.

The left shifter – the one that’s linked to the front mech – is now trim-less. That’s because the Yaw design means the chain will never rub on the front mech’s side plates no matter what sprocket you’re using at the back. The action is also said to be lighter than before.

As the full Return to Center name implies, the shift lever automatically moves back to the centrepoint once you have changed gear so it lives in the same place regardless of which chainring you’re using. Although SRAM call it the centrepoint, you can actually set the position yourself within a 40° band.

The shifting blade is made from unidirectional carbon fibre and the bolts are titanium. SRAM’s official weight is 175g and the shifters will be available from 1 December at £299.99. 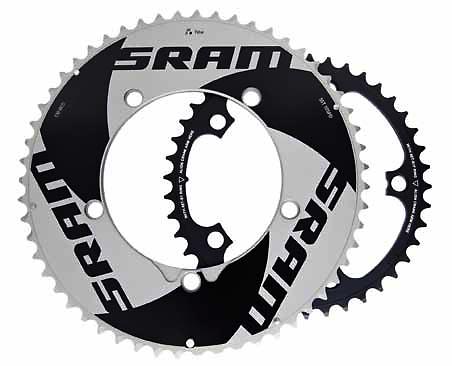 The SRAM Red Yaw compatible chainrings will be available in two ratios: 53/39t (130mm BCD) and 50/34t (110mm BCD). There are two options for each of the outer rings because the chainring bolts are ‘clocked’ in a different position on the new SRAM Red Exogram Yaw cranks, with one of the chainring bolts hidden behind the crank arm.

That means the chainrings for these new Exogram cranks won't work on older style SRAM road cranks, as the shifting ramps would be clocked around slightly into the wrong position. However, SRAM are also producing some Yaw compatible outer chainrings to work with older cranks with the more conventional bolt circle pattern.

SRAM's UK importers Fisher Outdoor Leisure expect the first deliveries of the new chainrings at the end of November.