Well we've known it was coming for a while but today Shimano have formally announced their road disc setup as well as the launch of the new Ultegra Di2 groupset, 6870.

The new Ultegra mechanical groupset, 6800,  was launched back at the start of May; The main headline was the switch to an 11-speed cassette bringing it into line with Campagnolo's top-end systems, but the improvements in the shifting and braking performance, with technology taken directly from the Dura-Ace 9000 groupset, were perhaps more important. Ultegra Di2 6870 uses the same chainset, chain and brakes but features redesigned electronic mechs and shifters which are sleeker and a bit lighter; Like Dura Ace 9070, this incarnation of Ultegra Di2 is the first that weighs less, according to Shimano, than the mechanical version – if you use the internal battery. Along with all that there's another, hydraulic, Di2 lever and, of course, those discs.

Let's cover the disc brakes first, because that's what's been generating the most interest and comment. We saw prototypes of the discs on Michiel van der Heijden's cyclocross bike back in February and did some guessing, but now we have the full specs.

Why discs? Why now? "We're not first to market but the discs have been tested a lot to make sure they meet Shimano's standards", Mark Greshon of Shimano told us. "The main benefit that Shimano can see is that it offers dependable braking performance in all conditions. Braking performance is more consistent in the wet and the dry. Hydraulic discs also mean reduced maintenance. Disc brake pads are very quick and easy to replace; the brakes will need bleeding once in a while but it's much less frequent than having to adjust a brake calliper." 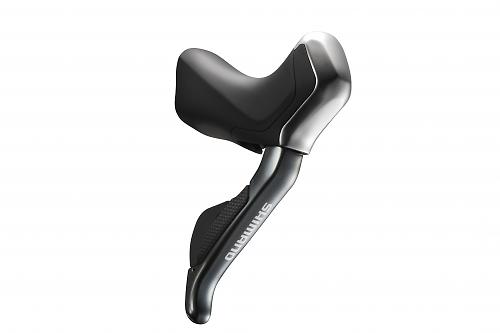 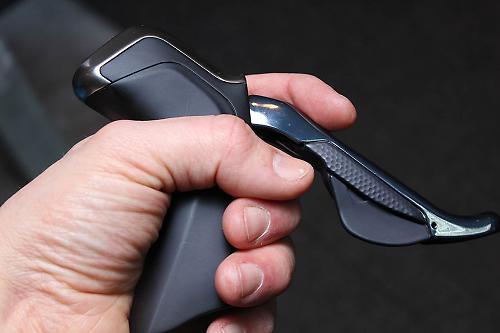 The discs are Di2-only, because the space vacated in the lever by the mechanical indexing is what's filled by the mineral oil reservoir. That means the form of the lever is very similar to the non-hydro version, unlike SRAM's Red Hydraulic lever which is significantly bigger to fit both mechanics and hydraulics in. The callipers we guessed would be similar to the current XT level mountain bike ones, and indeed there's no discernable physical difference between the two so far as we can see. Except they're a different colour and don't say 'XT' on them. Given that the XT brakes are very well rated they're an obvious port. A fully-bled set of STI-levers and callipers will set you back £599.99 (all prices are RRP). Shimano expect the brakes to be adopted for CX and, increasingly, on the road.

"Making a brake for cyclocross isn't that hard, because conditions aren't all that different to a mountain bike cross-country race", Mark said of the system. "Making a disc brake for the road is a lot more difficult. The main problem you come across is heat, especially in warm conditions on a long descent. The heat build-up is quite significant. This is what Shimano have been focusing on: making sure the brakes are reliable, and that there's no danger of overheating. We've tested the brakes in all conditions, from hot and humid Japan to sub-zero temperatures, at altitude, in Colorado." 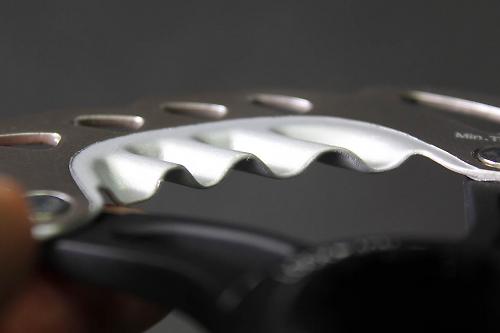 Rotor-wise, Shimano have a heat-dissipating technology that others don't. Their FREEZA rotors (£54.99 each) are a 3-layer construction, with steel braking surfaces and an Aluminium layer sandwiched in between. That Aluminium wafer conducts heat much, much better than the steel, and the Aluminium extends into cooling fins on the inside edge of the rotor to help cool it down more quickly.

The technology has been widely used in MTB, first with the 203mm Saint rotors and moving down into XC territory with the XTR groupset. The new Ultegra has a recommended rotor size of just 140mm for front and rear.

Just 140mm? Shimano reckon that gives the best braking feel, although they're prepared to warrant that 160mm might be preferable people who 'require more braking power'. They looked at Big Dave at that point, although Shimano haven't put a weight restriction on the brakes at all for 'normal road usage'. Heat build up is managed with the rotors and also Ice Tech brake pads, which have cooling fins that extend above the top of the calliper to increase the surface area and aid cooling. Again, Ice Tech pads are widespread on Shimano's MTB groupsets.

The discs are coming in at Ultegra level (with an alloy lever), although the STI lever is technically non-series. "Dura Ace is basically focused on professional racing at the highest standard, and professional racers aren't allowed to use discs", Mark told us. "So we're bringing it in at an Ultegra level, where it fits nicely with Cyclocross and the type of road user you'd expect to be interested in disc brakes". The discs will work both new and existing Ultegra Di2 systems, as well as Dura Ace 9070. 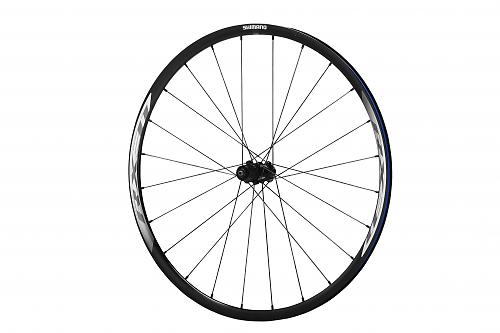 To complement the discs Shimano have a new 11-speed disc-specfic road wheelset, the RX31. It's a disc-happy version of the RS31, which is itself an 11-speed update to the RS30. It's a good training wheel but a rung below Ultegra level; Shimano's RS81 range are the current Ultegra-level wheels. They're probably mostly aiming at CX riders in the first instance though. The RX31s have a claimed weight of 1,795g and the rear hub is 135mm wide; everyone, it seems, has decided that that's the standard for discs. Will it become the de facto standard for all road wheels? 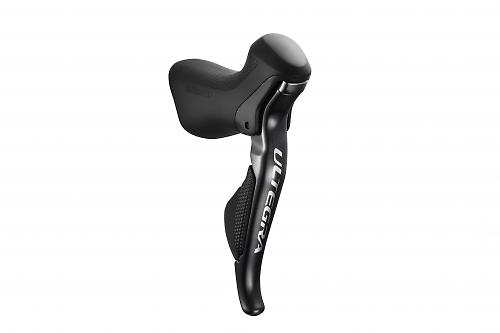 Let's move on to Ultegra Di2, which Shimano want you to think of as part of the big, happy Ultegra family. "We don't really want to differentiate between Ultegra and Ultegra Di2", Mark told us. "As a consumer you have a choice; you can choose a mechanical groupset or an electronic groupset. It's like buying a car: you choose the model, but you can choose a manual or automatic gearbox. That's how we see Ultegra." Obviously it's a little different here because Di2 is significantly more expensive than its mechanical counterpart. If you want to read about the new 4-arm crank, the symmetrical dual-pivot brakes and the 11-speed cassettes, that's all covered in the mechanical launch; here we're going to focus on the new bits.

Ultegra Di2 is now in its second incarnation. The first version was Shimano's first to use the CANBUS standard for communication and now all Shimano's electronic groupsets (including Alfine) are compatible. Shimano call the wiring and communication system E-tube.

Using PC software it's possible to alter many aspects of the shifting. The time from lever press to shift can be changed, as can the multi-shift: you can choose a number of shifts, and the gap between them. You can also program the levers to work in different ways. The standard setup is similar to the mechanical groupset (rear shifts on the right and front on the left) but you can make any button correspond to any shift. Singletrack's Chipps has his set up as a sort of paddle-shift, with the bottom lever on each STI controlling the rear mech and the top buttons doing the front. We covered the process for programming Di2 earlier in the year; Ultegra is configurable in the same as Dura Ace, which we featured in this video:

The STI itself (£299.99, 295g) has had some minor updates. The hood shape has been tweaked a touch, and there's been a bit of adjustment in the button placements to make them easier to use from the hoods; the contrast between the surface texture of the two is more pronounced too to help you feel your way. The brake lever is aluminium rather than carbon on the Di2 units, mainly to bring the cost of the electronic groupset down a little bit.

Wiring is the same plug-and-play system as the new Dura-Ace 9070 groupset. You get a junction box which usually sits under the stem; there are three-port (£89.99) and five-port (£119.99) options depending on how many shifters you want to plug in. There's STI levers, aero buttons and sprint (drops) and Roubaix (tops) switches to choose from. One benefit of a spare port is that you can use it to charge the system if you're using the increasingly popular hidden battery (£129.99); the standard battery (£59.99) is unchanged. 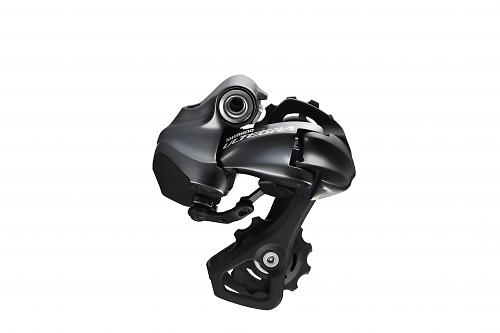 Moving on to the mechs, the main difference for 6870 is that the motor units have been reduced considerably in size. "If I ever heard a negative comment about Ultegra Di2, it was never anything to do with the performance", Mark told us. "It was always to do with the looks". Certainly the original Ultegra Di2 rear mech especially wasn't an aesthetic masterpiece. The new one (£219.99, 250g) is a lot sleeker, so much so that you'd be hard pressed to tell it from the mechanical one at a glance; the mechs are the same size as the Dura Ace ones. 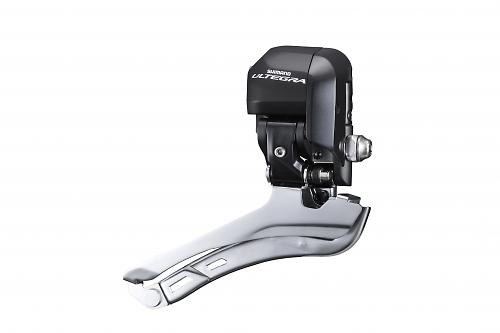 The front mech (£199.99, 155g) needs a bigger motor and consequently it's less easy to miniaturise, but the new version is certainly a big improvement.

Di2 is the opposite of mechanical groupsets in the sense that it's the derailleur, not the shifter, that's speed-specific. So you'd be able to use the new levers with old 10-speed mechs but you couldn't swap your old Di2 rear derailleur our for the new one. Similarly, the auto-trim on the front mech won't work properly unless it's paired up with an 11-speed rear mech. The rear mech comes in two cage lengths, short (SS) and mid (GS). If you want to make use of the wider ratio casettes (30T and 32T) then you'll need the longer one. The rear mech features the same crash protection as other Di2 rear derailleurs; if it senses a crash then the motor disengages to protect the mech and it can be reset when you've picked the bits of hedge out of your spokes.

Ultegra has a new addition in an aero shift and brake lever (£199.99) which in the past was only available at Dura Ace level; the main difference between the two is that the Ultegra version uses an alloy, rather than a carbon, lever.

That's the skinny for now. Obviously, we'll be getting both the mechanical and electronic Ultegra groupsets in for test as soon as we can; mechanical is expected very soon with Di2 a bit later in the year. And, of course, we'll try the discs out properly when they land. We've had a go on the prototypes but short of confirming that they work there's not really a lot to say; we only rode them round the car park. The levers feel very similar to the mechanical Di2 and there seems to be plenty of power on offer.