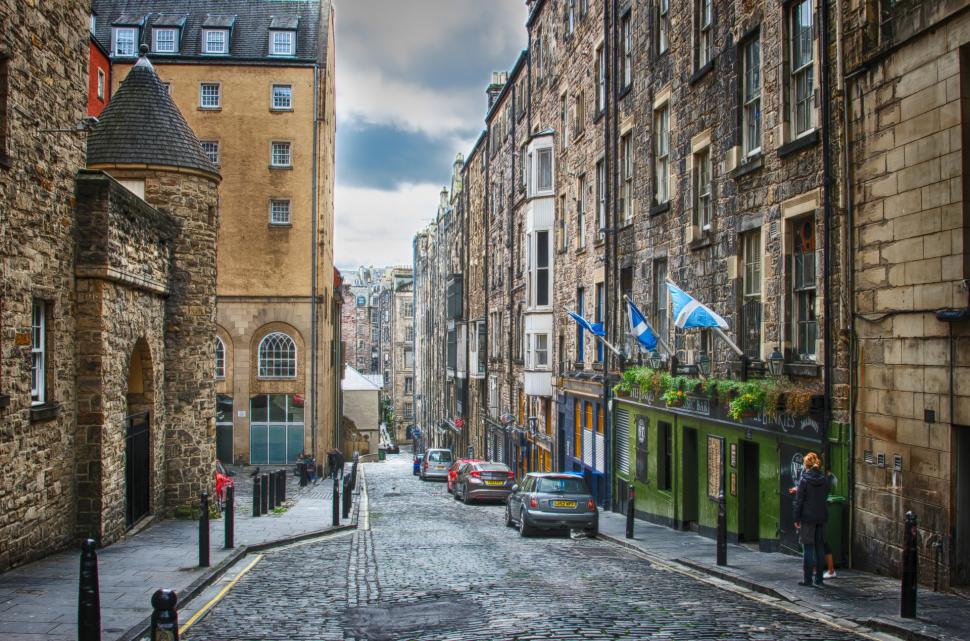 "45 per cent of the people in this city do not have access to a car - so when we only have policies that support car use, what we’re essentially saying is that 45 per cent don’t matter - well, they matter to me."...
by Will Bolton

Edinburgh's Transport Chief has defended the 'Spaces for People scheme' and said she is simply sticking up for 'the 45 per cent of the city's residents' who don't have access to a car.

The schemes have been installed as part of the Scottish government’s Spaces for People programme, which gave the council £5m at the start of the pandemic to install temporary traffic measures that would allow people to walk and cycle while maintaining social distancing, the Scotsman reports.

Cllr Macinnes was scathing in her attack on critics of the scheme and highlighted how important the plans were for facilitating travel for families who need low-cost ways of getting around the city.

She said: “This is a thing that really gets me, about how the opposition to these changes play this out...

“Conservative Cllr John McLellan, for example, has been regularly banging on since the beginning of this administration about how we’ve got a ‘war on cars’.

“I would flip that around, and say what we’ve got is a campaign to give people more choice, because 45 per cent of the people in this city do not have access to a car - so when we only have policies that support car use, what we’re essentially saying is that 45 per cent don’t matter - well, they matter to me.

“Now, some of those 45 per cent will be a matter of choice - if you live in Marchmont, and you live one of the tenement flats, where it can be hard to park - the choice to say ‘well I don’t need a car’ is quite strong, as you live close to the city centre and it’s all pretty easy.

“But there’s a lot of that 45 per cent who sit in real pockets of deprivation in this city, and where owning a car, because they feel they have to, is a heck of a drain on family finances.

“So I want to get to a situation where we’ve got safe infrastructure which means those families can say, ‘well I’ve got a teenage kid who is switching from school to go to Edinburgh College - how can we get them there in a way that isn’t going to cost the family a fortune for the next few years?’.

“Well, let’s give them a choice to buy them a cheap second hand bike and get them safely onto the roads.

“You then have a very low cost way of getting around. Same thing with walking facilities, same thing with trying to keep public transport costs down and making sure that it goes where people need it to go.”

Weather’s looking fab for tomorrow! If you’re out and about walking, wheeling or cycling in #spacesforpeople schemes in Edinburgh - do take some pictures and share them with us - we’re celebrating #thanksforthespace pic.twitter.com/DrETrwu8bQ

The council first installed the Spaces for People measures using Temporary Traffic Regulations Orders (TTROs,) which allowed them to install temporary bike lanes, wider pavements and road closures for a maximum of 18 months.

Councillor Macinnes continued: “All of those things are driving this really positive agenda to make this a place where you can breathe the air a little better, where you can get around without having to always make the choice to drive.

“There will always be some people in this city who need to use cars, whether that’s people who are disabled or who live with chronic pain, or for other reasons.

“But that’s the kind of thing that opening up safe cycling, walking and wheeling infrastructure gives people – real choice .

“There is a regular argument in opposition to change and choice that comes forward about, for example, ‘my 89-year-old mother can’t get on a bike’, well, of course not. We’re not expecting everyone to get on bikes.

“We just want to make it much easier for those who can and want to, and the same for those who want to walk or wheel in a better, much friendlier environment.”

In response, councillor John McLellan said: “It's noticeable that councillor Macinnes has not denied she and her administration are engaged in a war on cars, so I'm grateful to her for confirming that they are.

"The Conservative group has never said that we only back policies which support car use, but have repeatedly called for a more balanced approach to transport issues which is sensitive to the needs, knowledge and views of the people her administration's policies affect.

"I welcome councillor Macinnes' acceptance of the principle of choice, but the problem with much of the current approach is that in prioritising cycling above all else at key locations actually reduces choice by adversely affecting the attractiveness of our much-valued bus service.

"If proof was needed, it is now known that freedom of information requests to find out more about the issues raised by Lothian Buses with the council have been blocked because of the sensitivities involved.

"And as the Edinburgh Access Panel has forcefully pointed out, the choice of disabled people has been adversely affected by schemes which have removed safe parking, and run cycle lanes behind floating bus-stops.

"Councillor Macinnes and council leader Adam McVey accused the Conservative group of populism, but if the accusation is that we are standing up for local people who feel ignored and patronised by his administration then we are guilty as charged."

1
Police officer caught on camera telling cyclists to ride in single file to be given "education around traffic offences"
2
Hit-and-run driver moved unconscious cyclist off road before fleeing scene
3
“Everyday tasks have become my new challenge”: Christina Mackenzie in “excruciating pain” after being struck by hit-and-run motorist
4
Cyclists report multiple muggings and thefts on London cycle route
5
Canyon revamps Inflite cyclocross range for 2023
6
Near Miss of the Day 827: Two close passes and a screenwash shower
7
‘Dangerous cycling is not a priority,’ police force says
8
Cyclist bitten by dog… and then abused by owner