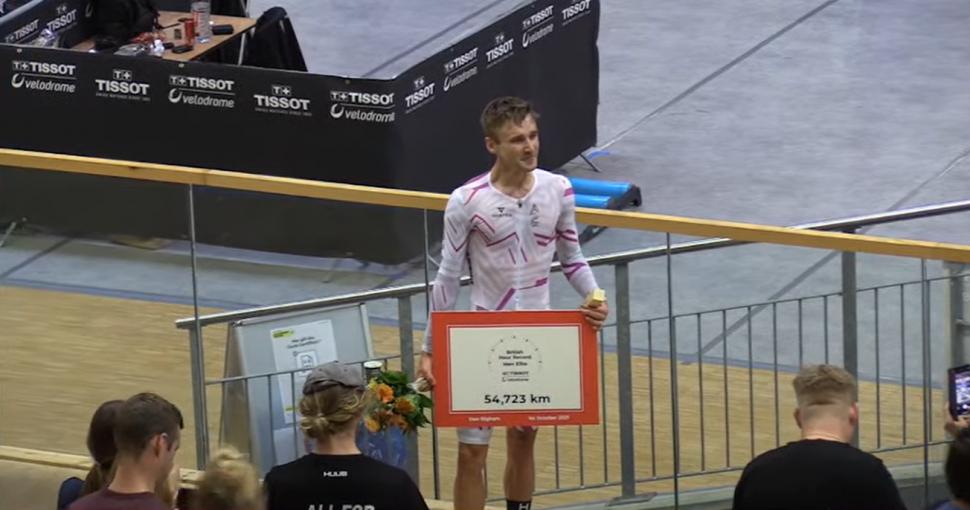 Dan Bigham is the new British Hour Record holder after surpassing the distance set by Sir Bradley Wiggins back in 2015. The 29-year-old powered his way to 54.723km in the Grenchen Velodrome in Switzerland this afternoon, 197m further than Wiggins' distance.

Bigham stressed the importance of pacing and aerodynamics before the event, and promised he would not touch the power output Wiggins famously recorded at the Lee Valley VeloPark six years ago.

> Listen to Dan Bigham not talking about the Danish 'tapegate' controversy + plenty more on the road.cc Podcast

Despite being ten seconds down on Wiggins' benchmark early on, he managed to hold his pacing, overhauling the deficit and extending his advantage as the hour ticked down.

Talking to The Cycling Dane Youtube channel at the finish, where the ride was live streamed, an ecstatic Bigham said:  "It was actually really enjoyable.

"I am sure I had a few people scared early on. It is quite a scary way to ride it because you know you have got to pick it up, but I paced it really well.

"I felt I was on a good one, earlier in my warm up and out on the track. I had target splits for every five minutes so I knew exactly what time gap I needed to be at. After 20 minutes I thought 'I can nip at this a bit more'.

"I was just hitting 16.00s and 16.10s [lap times] for the last 25 minutes and I was just chipping away at the record. I thought it would bite me at some point, just at those last five minutes I was like 'and now it hurts'."

Bigham was greeted by his partner Joss Lowden at the finish, before his distance was ratified by trackside officials. Lowden herself yesterday broke the outright women's Hour Record with a distance of 48.405km in the same velodrome.

Due to issues surrounding drug testing, Bigham could not have broken the UCI Hour Record, even if he had surpassed Victor Campanaerts' world best distance of 55.089km. As he does not ride for a WorldTour or UCI Pro team, Bigham is not elligible for the UCI Testing Pool, something he estimates would have cost around £7,000 to enter at his own expense.