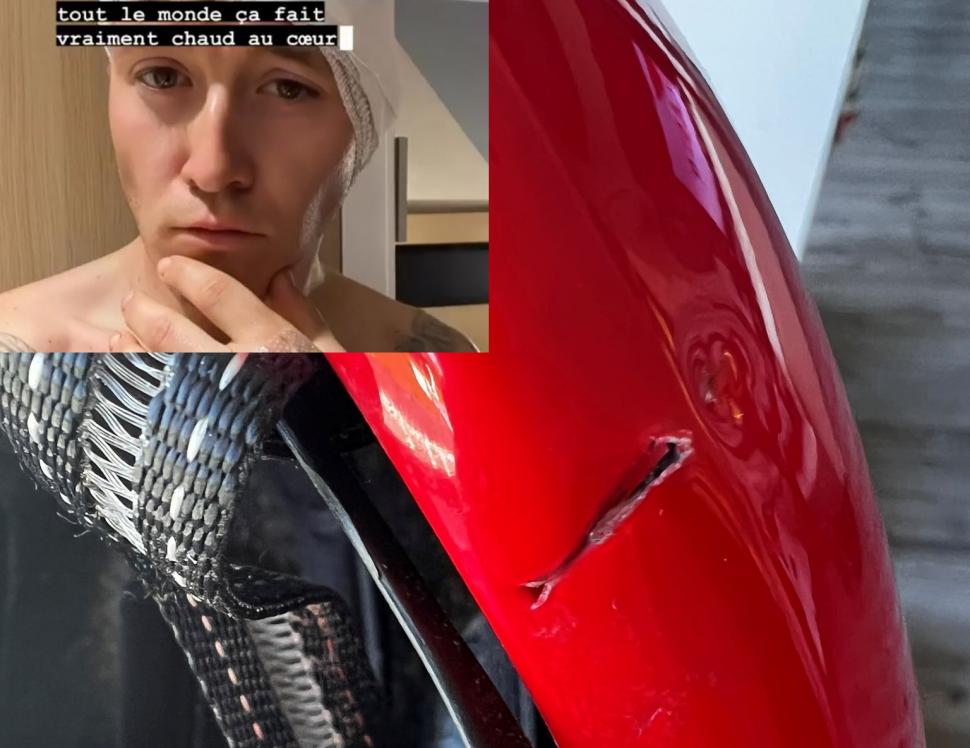 Hugo Hofstetter has called for the UCI to better protect riders from disc brake injuries after he needed 35 stitches to treat a cut to his ear sustained during a crash.

The Arkéa–Samsic sprinter fell with four kilometres to the finish of the final stage of 2.1 Circuit de la Sarthe, and suffered a large cut to his head and ear.

Speaking to Dernières Nouvelles d'Alsace, the former Israel Start-Up Nation rider said he has felt better "but there's nothing we can do about it. I received around thirty stitches in my right ear, at least 35, and two in my right hand at Le Mans hospital."

Hofstetter shared a photo of his sliced Ekoi helmet on social media, before later posting an Instagram story showing his bandaged head.

He asked: "When will the UCI put protections for disc brakes? It would have saved me 35 stitches?"

Someone claiming to be a former UCI employee replied to the 28-year-old's concern, suggesting the pro riders' union AIGCP and World Federation of the Sporting Goods Industry has refused the world governing body's safety proposals in the past.

"We rarely hear the teams on this subject. However, the teams (employers) are responsible for your safety. My best wishes for recovery for this injury which is always one injury too many on a cycling race," they said.

Hofstetter's place at Paris-Roubaix now seems unlikely due to the injury, a setback to his strong start to life at the French team which has seen him rack up podiums at Belgian one-day races: Kuurne-Brussells-Kuurne, Le Samyn and Bredene Koksijde Classic.

Disc brakes' emergence in the peloton led to multiple pro riders claiming the rotors had caused them injury. In 2016, Fran Ventoso reported a disc-related injury at Paris-Roubaix, prompting the UCI to halt its trial of the technology.

Ventoso recalled: "I didn’t actually fall: it was only my leg touching the back of his bike. I kept riding. But shortly afterwards, I had a glance at that leg: it didn't hurt, there was not a lot of blood, but I could clearly see part of the periosteum, the membrane or surface that covers my tibia. 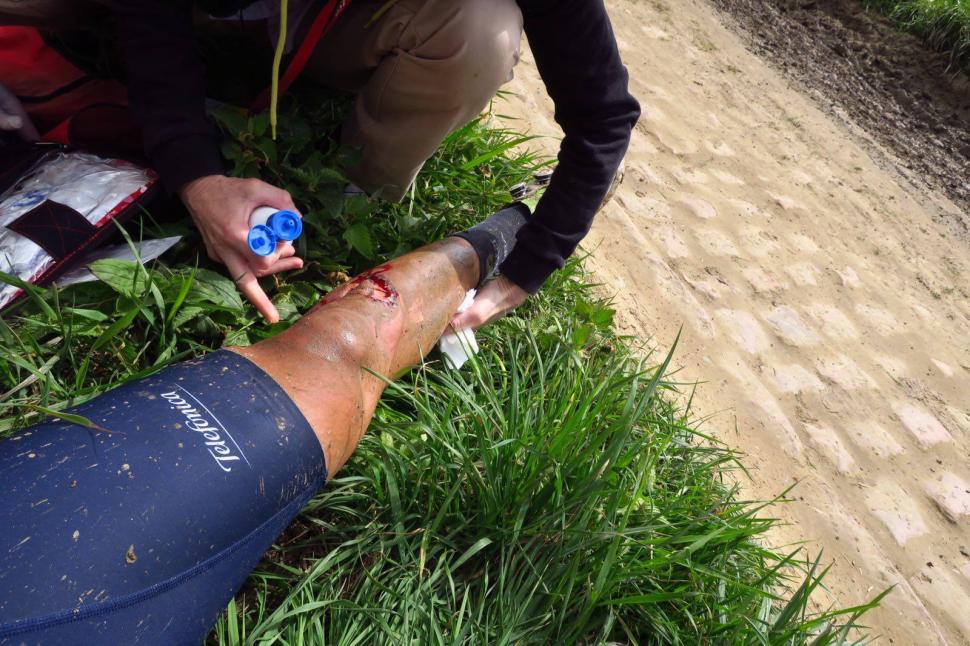 "I got off my bike, threw myself against the right-hand side of the road over the grass, covered my face with my hands in shock and disbelief."

Then, in October of the same year, Sam Bewley shared a now-deleted picture of a burn or scrape that he said was the result of a hot rotor touching his skin.

In 2018, Cyclo-cross racer Katie Compton's husband shared a gory picture of her knee "cut to the bone", apparently caused by a disc brake rotor.

Chris Froome has also raised issues with discs, but the four-time Tour de France champion's problems are less safety-related and instead down to his rubbing.

Speaking in a video posted on his YouTube channel Froome said: "My entertainment with disc brakes continues. I think they're sort of work in progress. I think the technology is improving but the margins are so slim. You do a big descent and the alignment moves completely so I need to stop and readjust everything again.

"We're riding Shimano at the moment. I hear the new 12-speed Shimano has sorted out some of these issues but… with the 11-speed [we're] still getting a lot of rubbing, getting one piston firing more than the other one, which always puts things out of alignment.

"No matter how many mechanics I’ve spoken to or taken the bike to, you just can't get 100 per cent on top of that. [You] always… start getting a few issues as soon as you start doing some some really big descents.

"But c'est la vie, for the time being. Just put the earphones in and pretend I can't hear it."