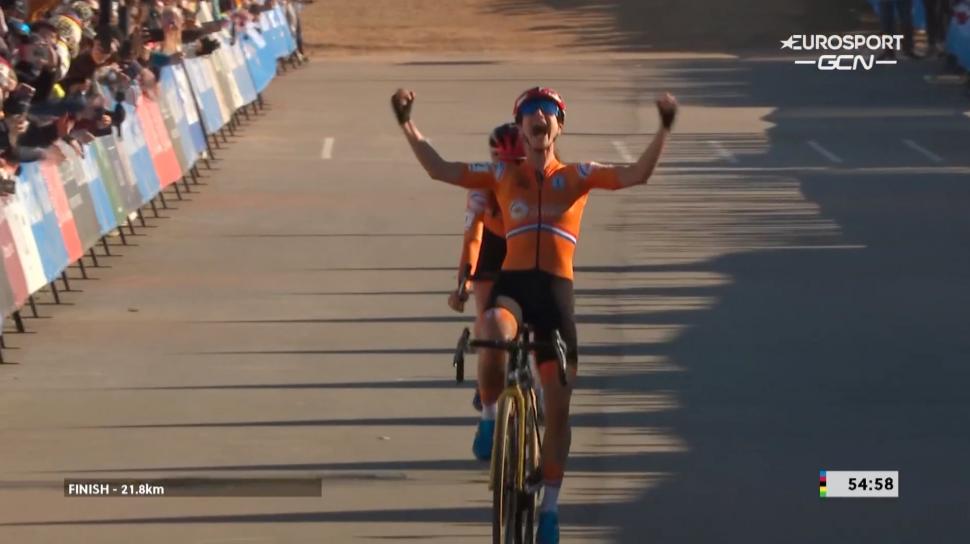 The first full day of racing at this year’s UCI cyclocross world championships in Fayetteville, Arkansas, saw Marianne Vos underline her status as the greatest cyclist ever, outsprinting Lucinda Brand after a thrilling duel to secure a record eighth elite women’s world title.

Yesterday’s victory – the Dutch rider’s first world cyclocross title since 2014 – comes 16 years after her maiden elite rainbow jersey in the discipline in Zeddam, and moves Vos above Erik De Vlaeminck in the list of most successful elite riders at ‘cross world championships.

The 34-year-old has now amassed 13 rainbow jerseys in total during her glittering career on the road, track, and in the ‘cross field.

As is always the case in cyclocross, however, nothing is guaranteed, and Vos was fortunate (and skilled enough) to recover after an early mishap, when she nearly lost control of her bike on a sharp corner during the first lap, to follow the pace of her teammate and defending world champion Brand.

By the third lap, the two Dutch riders – the undisputed stars of the women’s cyclocross scene this winter – were clear of the rest on the fast and dry course, and in the last two laps they engaged in a pulsating, to-and-fro tactical battle right up to the final sprint, which Vos won convincingly.

Italy’s Silvia Persico prevented a Dutch clean sweep of the podium, taking a breakthrough bronze medal ahead of the unfortunate Ceylin del Carmen Alvarado, who crashed in the final lap while battling Persico for third.

“It’s incredible. Now I just can’t believe it,” Vos said after her victory. “At first leading up to this race you don’t look back that much, it’s just trying to focus on the race itself, and now I just don’t believe it.

"It was such a difficult race. I knew Lucinda was going to be very, very hard to beat and she put on some pressure and I tried some pressure but it’s so difficult to get away. Then I knew I had to try and stay calm and try to do the right things in the last lap, and then focus on the sprint.

Vos’ record eighth ‘cross world title followed a dominant display by Britain’s Zoe Bäckstedt in the junior women’s race, while Belgium swept the podium in the U23 men’s event with an equally impressive team display, as Joran Wyseure soloed to the rainbow jersey ahead of teammates Emiel Verstrynge and Thibau Nys. Cameron Mason’s battling performance was enough to secure a hard-fought fifth place for the promising British rider.

Despite the fantastic racing on show yesterday, the championships haven’t been without controversy, however. The UCI’s decision to stage the event in Arkansas has been criticised due to the state’s anti-trans legislation.

In April 2021, Arkansas became the first state to ban gender-affirming treatments and surgery for transgender youth. Later that month Brook Watts, a longstanding cyclocross promoter in the United States, resigned from his role as organiser of the Fayetteville world championships in protest against the new law.

Tara Seplavy, the deputy editor of Bicycling Magazine, announced on social media yesterday that she was boycotting the weekend’s world championships.

“For several reasons I don’t feel personally safe going to Arkansas right now as a visibly trans person,” she wrote. “I also do not feel comfortable rewarding USA Cycling for its continued lack of action or follow-up for allowing a hate group to attend US national championship events to harass athletes. I am not even sure if I will tune in to watch the races online at this point to be frank.

“The ship sailed moons ago on any type of boycott or direct action of the event. Instead of attending Worlds, I urge friends and followers to donate to organizations fighting against hate legislation in the state, doing work for the queer community in the region, or advocating for the rights of trans athletes in cycling.”