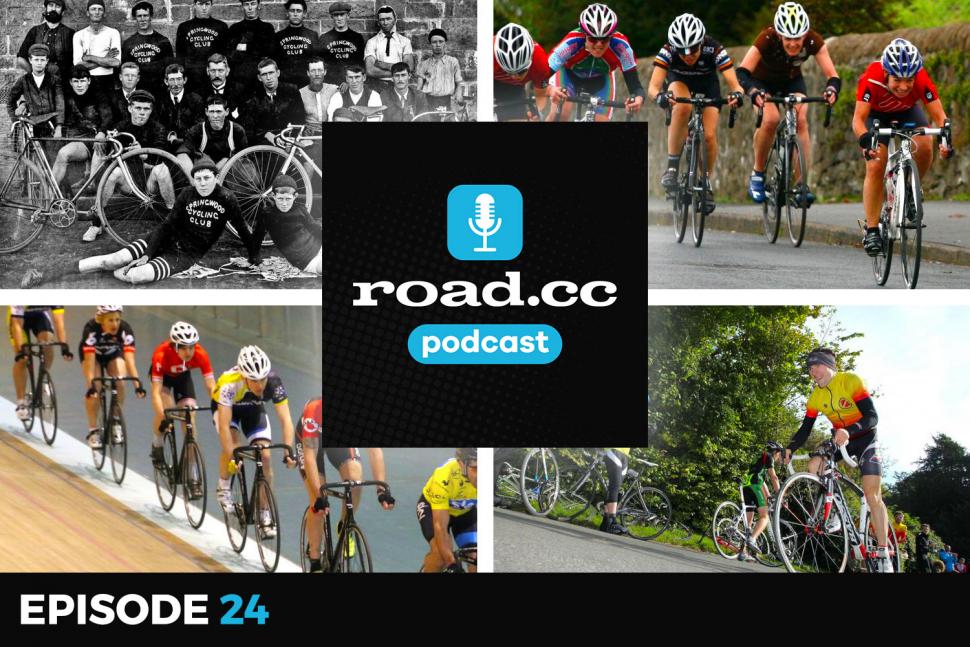 Are you pro or anti-cycling club? Hear the case for and against them in the latest episode of the road.cc Podcast

The latest episode of the road.cc Podcast is now live, and the main feature today is one that we are sure will provoke a lot of discussion one way or another as we debate the pros  and cons of joining a cycling club – and we also have some more cycling confessions from the road.cc team for your entertainment (and possible shock).

Cycling clubs – the case for and against

As you may know, when road.cc was founded back in 2008, one of the ideas behind it was to become a kind of virtual cycling club (hence choosing to register the site in a territory with the .cc domain) for people who were unable to join an actual real-world cycling club for whatever reason, including those who simply didn’t want to, and give them a community where they could come together to talk about all things bike.

The discussion, chaired while sitting firmly atop a fence by road.cc Podcast host George Hill, pits road.cc founding father Tony Farrelly, who isn’t the biggest fan of cycling clubs, against Nick Rearden, once upon a time tech editor here and now working for Raleigh, and who has belonged to clubs since he was a teenager and later became one of the earliest members of Velo Club Walcot once he moved to Bath.

Indeed Nick credits a club with giving him his start in riding cycling, as he explains: “My parents wouldn’t let me have a bike. It so happened that the local cycling club, which was the Thanet Road Club down in the far end of Kent held their winter club gym sessions in my school gym and I saw a sign and was sort of intrigued and went out with them.”

“I wouldn't have made much progress if it wasn’t for the welcoming arm of some of the older members of the club because I was pretty hopeless. And the wind blows very hard along that flat bit of Kent.”

Talking of one of his earliest rides, he said: “We did 20 old miles into the middle of Kent and then turned round. And the headwind homewards basically killed me – basically, I virtually got pushed home by the chairman and another older member, and they basically just nurtured me and encouraged me.

“And I kept riding, and I started racing, and it was just the loveliest possible experience that you could wish for. You know, I made friends. There were loads of young people of my own sort of age in that club and obviously I’ve kept an eye on the Thanet Road Club.”

After a spell in London, Nick now lives in Bath, and still sees the value in belonging to a cycling club, although he says that what he needs from one “has changed over the years” – it’s no longer about   sharing lifts to races and getting advice from club stalwarts.

“You know, when I moved down to Bath, I had absolutely no idea where anything was and over the 20 odd years I’ve lived here, I’ve now become one of the old hands and people kind of look to me to know the routes,” he said.

“But the thing is, even now I will still go out riding with someone who’s either is older than me, or who has a better memory, because I don’t tend to remember routes very well … you know, only 10 or 15 miles away from Bath.”

And through that, he says, you do learn new routes “because of riding with other people – otherwise you just ride the same blooming roads on your own the whole time!”

Putting the case against clubs, Tony admits his views on the subject have mellowed over the years, and that in some ways his dislike of them is due to clichés that nowadays are perhaps a bit outmoded.

Those include his vision of “pinch-faced roadies” who at “six o’clock on a Wednesday night or half past sparrow fart on a Saturday and then then dropping you after a mile for 30 miles or more and then coming back, repeat for six weeks. If you were still there, they'd bring the club and they tell you about all the things that were wrong with your bikes, you kit.”

He acknowledges that part of his dislike of clubs lies in his route into cycling – bike commuting (still his favourite form of cycling) in London at a time when it was mountain biking, and not riding on the road, that was the “fashionable” thing at the time.

“Doing the job I do, it’s quite sociable, it’s got its own in-built competitiveness, I don’t have that urge on the bike to sort of compete, especially as especially if I'm most likely going to lose, and I like going out on my own.

“I genuinely like going out with other people, but my default setting would be to go out for a bike ride on my own.”

Tony admits he fellows Velo Club Walcot on Instagram and mostly “they look like an inclusive, fun bunch,” and has even thought, “I’d go out with them but they all go out this like Saturday morning, eight o’clock … I’m in bed.”

The discussion that follows sees some coming together on the issue … Tony pointing out that road.cc members could actually race in kit available via the club, Nick pointing out that different clubs have a different focus and that it’s a case of finding one that best suits you.

Discussion of certain clubs in London, however, sees a lot of common ground between the pair, as well as George, who recalls a ride with a certain “very pushy one” where “I was dropped after five or six miles deliberately and then they didn’t give me the route” meaning he had to ask people whether they’d seen the group come through.

That leads on to talk of what might be termed the “more exclusive” clubs, with Tony saying: “There are clubs that are really unpopular with other clubs and even with people who aren’t in clubs but know who they are – and London seems to have its fair share of them, doesn’t it?”

“It’s inevitable that you’re gonna see the types represented very differently, and I think you’d only have to go to Richmond Park on a Sunday to see all kinds of people.

“I’ve certainly seen on forums people complaining about certain groups riding around Richmond Park in a certain way – the truth is what it really means is that they've got really sharp kit, they going really fast, they've got a very strong sort of ethos for riding really fast and in a very kind of elite way on very expensive bikes and I suppose it's going to piss people other off.”

In past episodes, we’ve been featuring cycling related confessions from members of the road.cc team, and we have three for your in this episode, one from Tony, the others from two of us who have been here almost as long – yours truly, and road.cc’s Official Grumpy Northener, John Stevenson.

So, keep listening to find out which one of us was something of a trailblazer in using a pair of Look road pedals in a mountain bike race (rumours that this heresy prompted the company to subsequently develop MTB-specific clipless pedals in retaliation remain unconfirmed), who hasn’t got the hang of a spoke key, and which one of us shudders at the thought of tackling a hill, let alone the Alps or Pyrenees.

Also, please let us know YOUR cycling confessions – what do you need to get off your chest about your own riding? Which skills haven’t you mastered? Which rookie mistakes have you made? Have you nearly crashed into someone famous? All sins will be absolved (though we may have a giggle along the way).