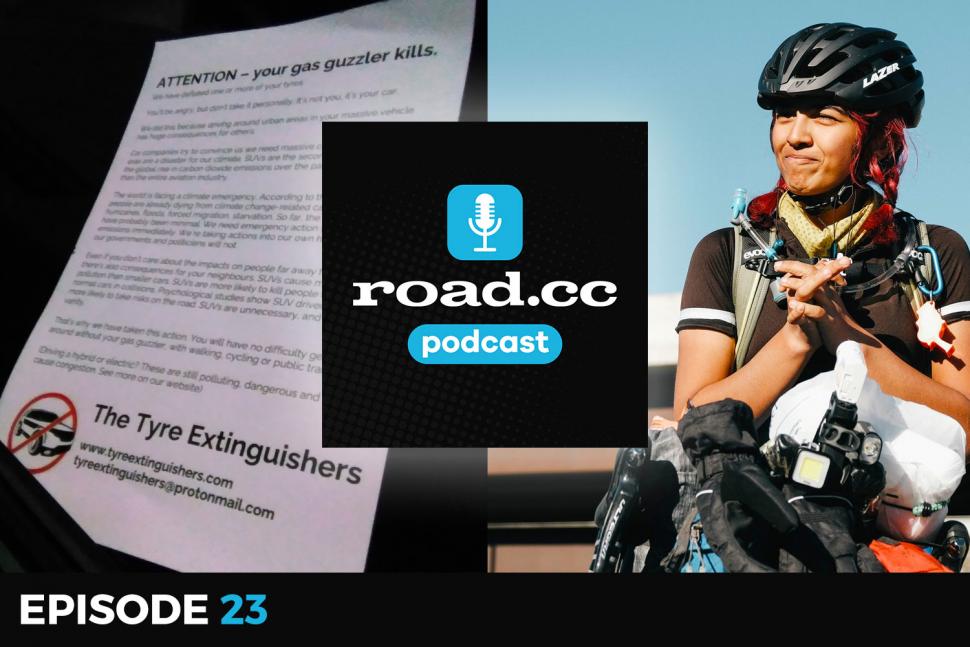 Vedangi Kulkarni – the accidental adventurer who rode around the world aged 19 – plus SUV nemesis Tyre Extinguishers on the road.cc Podcast

How an unplanned ride to John O’Groat’s helped inspire a teenager to circle the globe by bike, and much more on our latest episode
by Simon_MacMichael

The accidental adventurer is an apt description of Vedangi Kulkarni, who in the latest episode of the road.cc Podcast tells us how, arriving in the UK from India to study at Bournemouth University, she somehow found herself on an entirely unplanned ride to John O’Groats – and then, at the age of just 19, went on to circumnavigate the world by bike. We also have an interview with one of the people behind Tyre Extinguishers, the activists that have hit the headlines recently by letting the air out of SUV tyres in towns and cities across the country to highlight the damage such vehicles do to the environment.

Now aged 23, Kulkarni runs the Adventure Shed expedition management business, and in her chat with road.cc Podcast host George Hill she recounts some of her own adventures – including crossing the Himalayas by bike at the age of 17, inadvertently ending up on motorways when she first arrived in the UK, the kindness of strangers encountered on that impromptu ride to John O’Groats and of course her round-the-world bike ride.

She also talks about her inspirations, fellow cycling circumnavigators Mark Beaumont and Julianna Buhring among them, and shares her top three tips for anyone planning an adventure of their own, one involving polar bears – not of the armoured variety, luckily, in case any Philip Pullman fans are wondering – on Norway’s Svalbard archipelago in the Arctic Ocean.

Describing the culture shock she experienced on arriving in the UK five days after her 18th birthday, she says that the first thing she did was put her bike together, “realising that’s my mode of transport … I don’t know how the buses work, I don’t know how the trains work, don’t know any of that. Now, I’ve got my bike.”

But unfamiliar with how the UK’s road system operates, she confesses: “I’ve accidentally ridden on motorways, and when people honked me, I thought that was just out of encouragement … they’re just, you know, saying ‘hello’, they’re just being nice.”

Then she realised they were just asking her to “get out of the motorway, because, yeah, in my head I was like, ‘My goodness, that hard shoulder looked like the best bike lane I’ve ever seen in my entire life!”

As for that unplanned ride up to the north-eastern tip of Great Britain? “The idea was that I was going to do a 400km ride from Bournemouth to London and back,” she says. “Along the way, there was this village called Bentley in Hampshire, where my bike broke down, and someone came and asked me, ‘Are you okay?’ … I knew exactly what I was doing, so I said, ‘Oh, I’m okay, thank you’.

“Later on I realised, it’s getting dark, my lights are really crap, really tiny, they don’t work, so I knocked on some random door and it turned out to be the same random women who had offered to help me. She ended up inviting me to stay over at hers and when her husband came home, he asked me where I was going, and I don't know what took me over.

“I just pointed at John O’Groat’s because I’d heard it before. Like, you know, I’ve heard that random name before and now I’m guessing it on the map and then suddenly my brain goes wild and probably just thinks, ‘Ah, we could actually ride there’. So just pointed at that place and ended up riding there and I wasn’t prepared.”

Ride it she did though, despite not being kitted out for the journey, sleeping at times in bus shelters just in the clothes she had left home with, and knocking on random doors which led to “three very generous families across the UK” offering her a room for the night.

“It was incredible, you know, because these families, I'm still friends with them,” she says. “You know, when I ran out of money on my round the world trip, one of those families, they actually helped me out to to be able to continue.”

It was during that ride to John O’Groat’s that she was inspired to ride around the world, becoming in the process the youngest woman to do so, taking her inspiration not only from Buhring’s book but also Tom Davies, the British teenager who had recently completed his own circumnavigation by bike.

“I was like, oh my god, maybe there are no barriers for me to do this. Maybe I could just say that I’m doing something and then actually do it.”

Kulkarni goes on to recount some of the logistical issues she had to consider – not least, as an Indian passport holder, the issues of obtaining visas for the countries she planned to ride through.

She also speaks about the advice regarding sponsorship proposals and planning that Beaumont shared with her after she approached him by email, plus the support both her parents and her university, where she was studying sports management, gave her, and also runs through the bike and equipment she used.

As for those three top tips for anyone contemplating undertaking an adventure of their own?

The first, she says, is “ask questions, and no question is stupid” – using the example of asking detailed questions of a guide on Svalbard teaching her how to use a flare gun while on polar bear watch.

The second, is to remember that “the devil’s in the detail,” highlighting the importance of noting down “the little things that you find” that can help on future adventures – “ think about all the problems that you could solve on the go, because that's how you're going to actually have it all together for the actual expedition.”

And the third? “When you're planning your route, and if it's not in a proper wilderness place, mark everywhere you might want to stop or all the options, rather than just the ones you’re considering,” she advises.

“That way, the more options you have, the better,” she says, highlighting how breaking even the longest ride down into chunks makes it more manageable and less daunting.

In this latest episode, we also speak with one of the members of Tyre Extinguishers – the activist group that has hit the headlines in recent weeks for going out at night and deflating the tyres of SUVs (with the help of lentils) and leaving leaflets highlighting to the owners the damage that their vehicles – collectively responsible for more emissions worldwide than all but five countries, according to a recent study – are doing to the environment, as well as the danger they pose to other road users including pedestrians and cyclists.

Why target those vehicles specifically, rather than other issues that could help reduce global emissions, we asked.

“We've chosen SUVs for a number of reasons – not least the International Energy Agency's research showing that the increasing pace of SUV buying is cancelling out all the carbon savings from people switching to electric cars. If SUV drivers were a country, it would be the sixth-largest emitter in the world.”

Other reasons for the group targeting SUVs include air pollution, increasingly linked to a number of health conditions, the increased risk of death or injury to other people that the vehicles – and their drivers – present, plus the fact that “they are absolutely everywhere – and that means people in almost every urban area can take this action.”

As for the reaction they have received? “We've had very many death threats, almost entirely from men,” they told us. “There are a lot of men with fragile egos out there who seem to value their cars more than their children's future.

“Our favourite bit of media coverage by far is the weekend motoring article in The Telegraph on 3rd April, which suggested that motorists opt for smaller cars to avoid being targeted by the Tyre Extinguishers.

“This was proof to us that our campaign is starting to affect people's behaviour – that's a win. Imagine what we could do if even more people got involved,” they added.