The Aftershokz Bluez 2 headphones may have finally settled the debate over whether cyclists and headphones mix. These Bluetooth-enabled bone conduction headphones certainly have made my mind up.

Controversial London Mayor, Boris Johnson, weighed in on the debate towards the end of 2013 following an unusually high number of cyclist deaths on the capital's streets during the month of November. 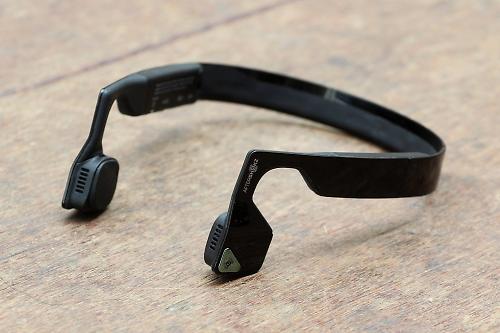 Johnson's comments sparked a national conversation - which polarised road users - about whether further safety guidelines, like banning cycling while wearing headphones, should be introduced to help protect cyclists.

Personally, I've always landed on the don't-ride-with-headphones side of that debate; you can blame my safety conscious father and years of enforced adolescent caution. But the sharp-looking Bluez 2s have totally changed my mind.

If we overlook the headphones' sleek design, user-friendly Bluetooth connection, and handy on-board controls for a moment, and focus on Aftershokz' patent-pending bone conduction technology, you'll quickly understand why my stance on cycling while listening to music changed overnight. 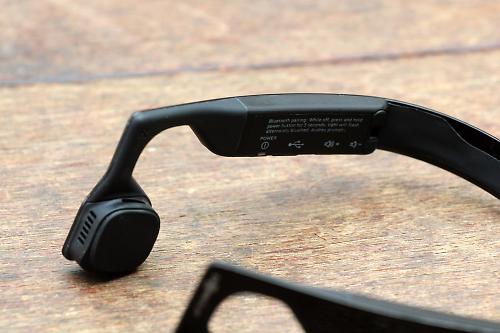 Bone conduction technology may be a new term to you, but you should get used to hearing about it. It's the same technology that Google are using for their incoming, optical-display, head-mounted Glass computer, and it works by sending sound waves through pads placed on your cheekbones which stimulate your inner-ear by vibrating your bones rather than your eardrums.

This leaves your eardrums free to register the sounds of your surroundings.

I must admit, I had doubts about the tech. I was apprehensive about the fidelity of the headphones as well as my ability to remain aware of nearby traffic and ride on busy roads safely with the kit on my head.

It only took one ride to clear me of those doubts and appreciate the excellent balance that the Bluez 2s offer.

When cycling at high speeds the roar of the wind wasn't enough to drown out the music, and when I turned the volume to maximum I was still well aware of the position of every car that whizzed by as well as the sound of my gears changing and my chain slapping.

It's a bit like you're imagining the music. You're not using your ears; your brain can't place the sound that the headphones are producing which makes the music sound like it's actually inside your head.

You don't lose out on much musical clarity either. Obviously, the Bluez 2s aren't going to offer the same sort of high-fidelity listening that a high-end pair of upmarket headphones would, but that's not what they're for.

The £89.95 price tag may seem like a large outlay for a pair of headphones that don't make you feel like you're in the studio sitting next to Justin Bieber. But maybe that's to your and the headphone's advantage.

The Bluez 2s aren't designed to be cutting-edge audio equipment, even though they perform commendably on that level. They're designed to be a trade off between awareness and clarity, and in that regard they fit the bill. 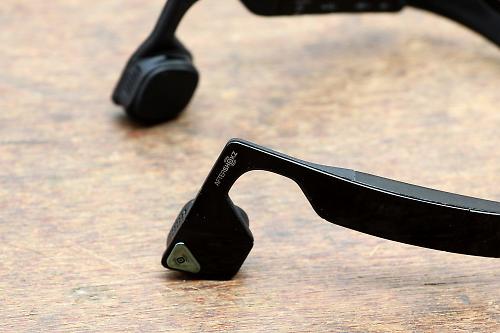 There are a couple of questions you should ask yourself before dropping the money on what are, in all honesty, a reasonably pricey pair of headphones.

How often will you use the Bluez 2s? Do you ride into work every day? If I didn't, I think I'd have to take stock before considering a purchase like this.

Will you only use them to listen to music? I certainly didn't. The Bluez 2s became the perfect sidekick to my phone's GPS connection and Google Maps navigation, as well as my on-board entertainment system while riding. I was easily able to find my way down a complicated country lane route that I'd not taken before with voice prompts from the app which was running on my phone.

I was also able to take phone calls while riding thanks to the accessible action button on the left audio pad. A single click picks-up and hangs-up phone calls, as well as playing and pausing music, skipping track - I rather belatedly discovered - requires a simple double-click of the same button.

The on-board volume controls tucked behind your right ear took a bit of getting used to before I felt like I could access them safely while riding at speed, especially when you've got to navigate around helmet straps, but they're prominent and easy to use.

The rest of the tech works excellently too.

I've had a fair amount of experience with Bluetooth enabled devices, not all of it good. But connection problems aren't something that the Bluez 2s suffer from.

At no point was I tempted to give up on the headphones in a fit of frustration, and repeated restarts to find a connection weren't something I had to deal with. There was only one occasion when switching devices prompted a 'connected' notification while still playing music from my phone.

They're comfortable too, even with a helmet on. I regularly found myself wearing them throughout the working day, from commute to commute, discovering that the awareness the headphones allowed on the road translated quite nicely into an office environment where popping a pair of headphones in can be quite antisocial.

Fortunately the device's battery, which is charged through a standard covered-up micro-USB port, also facilitates day-long wear. Aftershokz say that the The Bluez 2s will last six hours at low volume, which corresponded to them comfortably managing both of my commutes as well as periods of use in the office and at home at a reasonable volume without needing a charge.

Aftershokz provide a tension strap that give the headphones a tighter fit, which I never felt the need to use. They're also water and sweat resistant, which was handy on both the hot and wet commutes.

I mentioned Google's Glass computer earlier in the review, and throughout the review period I couldn't help but feel that this was my first experience of the next wave of wearable technology.

Throughout almost every working day, and every time I rode my bike, I wore the Bluez 2s. I used them to navigate, take phone calls and listen to music.

While they're not a computer in their own right - they require a connection to a Bluetooth-enabled device to work - they behaved in a very similar manner to how I imagine some of the tech on the horizon.

I strongly believe that wearable tech is the future. You needn't just take my word for it, just listen to the noises coming out of Google, Samsung and Apple. 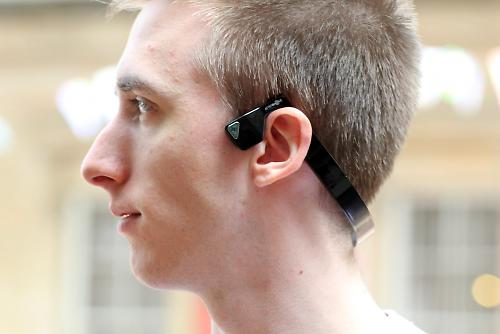 Whether or not the complex and pricey bits of kit that these big tech firms are conjuring up have a market that's ready to embrace them remains to be seen. But Aftershokz, and their Bluez 2 headphones, certainly do. You won't catch me riding without them.

Sleek and comfortable answer to the cycling-with-headphones debate

The Aftershokz Bluez 2 are a pair of headphones aimed at active individuals who want to remain connected to the world while also listening to audio - at least that's what Aftershokz have to say about them.

I'd have to agree with them. I'm an active guy who used the Bluez 2 headphones to stay aware of my surroundings while listening to music - spot on Aftershokz.

Playback time: Up to 6 hours

Standby time: Up to 10 Days

I had absolutely no problems with the construction of the kit. The sleek black look, and the creak-less plastic certainly look every bit as sharp as they are pricey.

Fit the bill in both quiet and loud conditions. Fantastic balance.

The sweat and water resistant vibrating bone conduction pads have withstood testing up to this point. A free two-year warranty from Aftershokz will cover you if they fail in the future.

Rate the product for comfort, if applicable:
10/10

I found them comfortably wearable all day.

The price will put many would-be customers off. It's new tech, so I'm sure as time goes on, prices will drop, but I'd advise you to take the plunge.

I absolutely loved using the Bluez 2s and the more time I spend in the saddle, the more I think I'll grow to appreciate them. 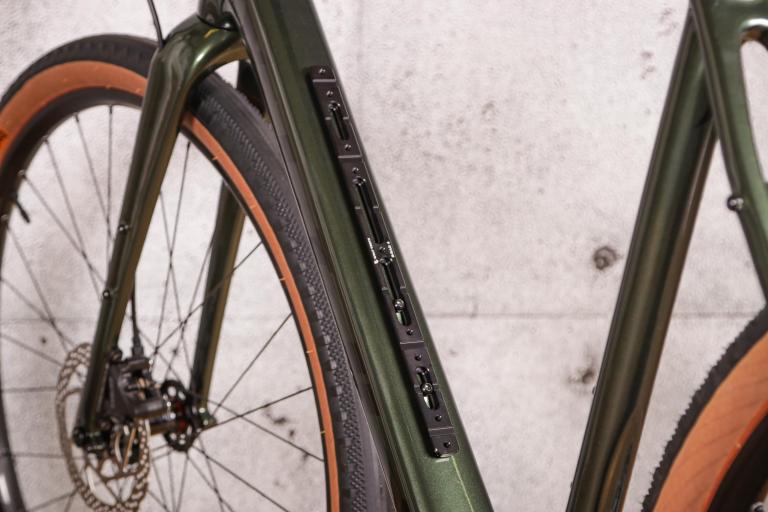 The backbone of the Wolf Tooth B-RAD system, and it's a solid storage solution 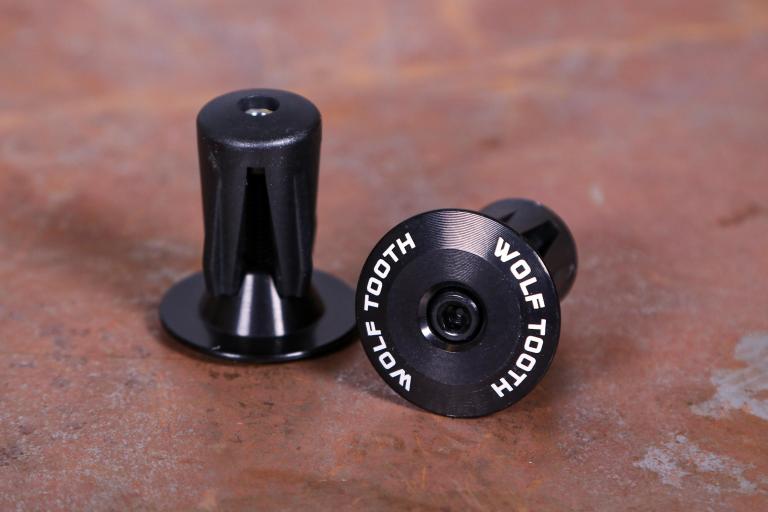 Not just bike jewellery, but strong, well designed and made in the USA 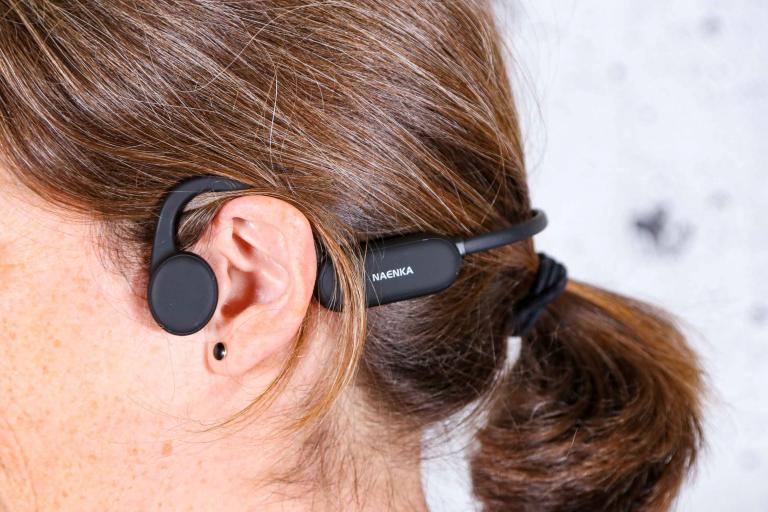 Well built and promise much, but sound quality, volume and battery life are all too low for serious cycling use 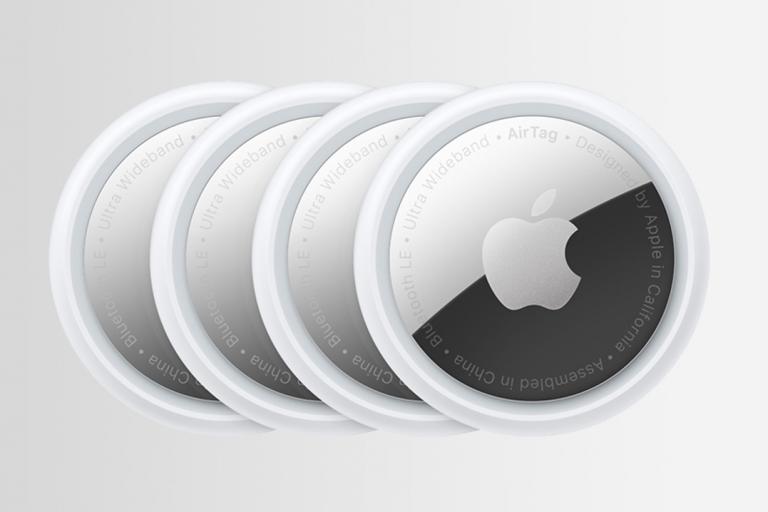