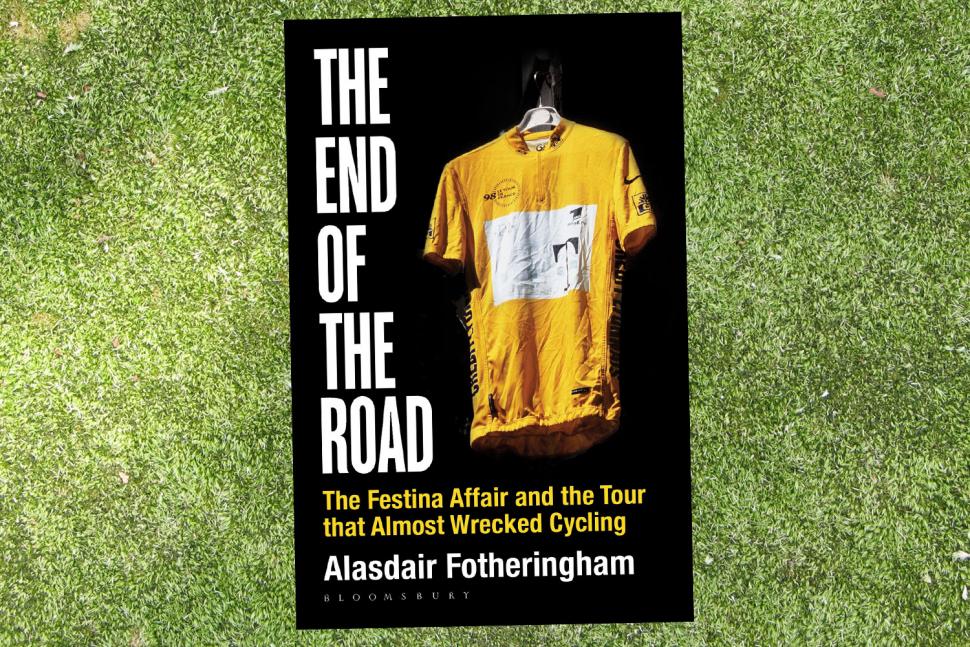 The End of the Road by Alasdair Fotheringham

9
10
So much more than an account of a single Tour: one of the most thorough explanations of the drug taking culture in cycling
Weight:
200g
Contact:
www.bloomsbury.com
What the road.cc scores mean

Alasdair Fotheringham's book, The End of the Road - The Festina Affair and the Tour that Almost Wrecked Cycling, goes a long way to explaining the culture of drug taking in cycling. Arriving at a time when those involved in professional cycling are more prepared to talk about it, and followers more prepared to believe it, the book makes a fascinating read.

Spare a thought for Festina. No doubt they spent millions sponsoring a top level cycling team, hoping to benefit from a positive association with cycling. Instead, the word 'Festina' is inevitably associated with 'affair' or 'scandal', and has become shorthand for one of the most significant events in cycling's drug-taking history.

It is generally accepted that the 1998 Tour de France was when people finally started to take the problem of doping within cycling seriously. While this book does tell the story of that Tour, it is really about the drug use within the professional peloton at that time; the general acceptance of it, the logistics of doing it, the effect on racing, and more. Once that has been explained, it makes it easier to understand why we find ourselves in the position we are today, and why change is proving so difficult.

Ireland seems to have had more involvement in exposing the culture of drugs within cycling than you would expect for a nation of its size. Take Paul Kimmage's book, A Rough Ride, described in this new book as 'the first book to deal head on with drugs in cycling in any language', which was rightly included in our recommendations for your essential cycling library.

A few years later both Emma O'Reilly and David Walsh were instrumental in bringing about the downfall of Lance Armstrong.

Even Pat McQuaid has had a part to play as president of the UCI, even if not always in such a positive way.

It seems entirely fitting, therefore, that this Tour had its Grand Depart in Dublin.

Things started badly for the race, and then got worse: whole teams were being removed from the race, or choosing to leave; there was a total 'breakdown in communication between riders, journalists, and organisers'. The peloton simply refused to ride at all, let alone race, and some parties even felt that 'it would have been the best for cycling if the Tour had stopped in Aix-les-Bains'.

Fotheringham will have an extensive list of contacts in the sport as a result of his many years of writing articles for the specialist and non-specialist press, as well as a few books – but until a few years ago I doubt that many of those contacts would have been willing to provide the information and interviews that make this book such a compelling read. Furthermore, I suspect that even if he had that information few people would have been prepared to accept that things were as bad as reported – as was the fate of some of the pioneering whistleblowers such as those already mentioned.

There have, of course, been numerous other books that tell us something about the issues of doping, although few are quite so thorough and well-informed; some even relate to this Tour – Willy Voet's Breaking the Chain, for example, 'a slim autobiography published following his arrest [on the way to this Tour] and sixteen days in prison'. It was this arrest that led to the chain of events that plunged the sport of cycling into the crisis that it is still resolving.

Fotheringham's book has the advantage of arriving on the scene at a time when attitudes to doping have changed significantly, which must make for more willing sources for his material and a more receptive audience – and a very interesting read.

So much more than an account of a single Tour: one of the most thorough explanations of the drug taking culture in cycling

Make and model: The End of the Road by Alasdair Fotheringham

The Tour de France is always one of the sporting calendar's most spectacular and dramatic events. But the 1998 Tour provided drama like no other. As the opening stages in Ireland unfolded, the Festina team's soigneur Willy Voet was arrested on the French–Belgian border with a car-load of drugs. Raid after police raid followed, with arrest after arrest hammering the Tour. In protest, there were riders' strikes and go-slows, with several squads withdrawing en masse and one expelled. By the time the Tour reached Paris, just 96 of the 189 starters remained. And of those 189 starters, more than a quarter were later reported to have doped. The 1998 'Tour de Farce's' status as one of the most scandal-struck sporting events in history was confirmed.

Voet's arrest was just the beginning of sport's biggest mass doping controversy – what became known as the Festina affair. It all but destroyed professional cycling as the credibility of the entire sport was called into question and the cycling family began to split apart. And yet, ironically, the 1998 Tour was also one of the best races in years.

The End of the Road is the first English-language book to provide in-depth analysis and a colourful evocation of the tumultuous events during the 1998 Tour. Alasdair Fotheringham uncovers, step by step, how the world's biggest bike race sank into a nightmarish series of scandals that left the sport on its knees. He explores its long-term consequences – and what, if any, lessons were learned.

Title: The end of the road