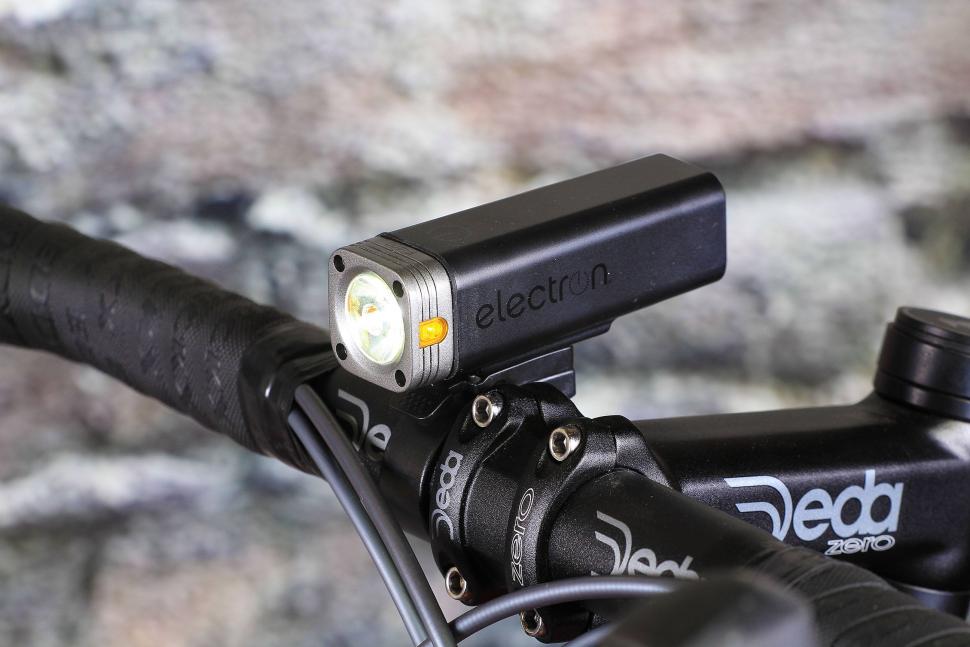 The Electron F-400 front light is described as a high performance 400-lumen light packed with features. Several weeks in and I'd call it a worthy commuter light for riders who want something with enough bite for moderate semi-rural/rural sections.

Superficially, save for the CNC machined aluminium lens cowling, it looks identical to its £24.99 F-150 sibling (review to come), from its rubberised switch with integral traffic-light charge indicator and matt graphics to the lozenge shaped amber windows. Composites seem a notch or so better, which is reassuring given the price differential.

It also comes with a better mount, which accommodated my Univega's beefy moustache bars more convincingly than the F-150's, but there's also a GoPro type should you prefer a cleaner look. Either way, both are reassuringly secure.

The F-400 uses a composite lens nut, single Cree diode and reflector. Given the weatherproof claims, I was quick to launch a sustained attack with the garden hose – nothing doing, so no surprise that it's sniggered at persistent rain.

By nature, lithium polymer cells are less susceptible to extremes of temperature and ours has remained consistently reliable, returning a full 3hrs 10mins in the maximum setting, 4:30 in low, 5:17 in pulsing, and well over 23 hours in flashing.

Recharging demands 2:15 at the mains, longer at the laptop. The charge indicator pulses red, flicking to green once fully juiced. I found the charge cable functional but so short as to be unusable in some situations. Thankfully, being an almost universal pattern, there's generally a substitute on hand if you're among friends.

The rubberised switch initially felt a bit vague compared to most these days but its positioning, coupled with the illuminated charge indicator, means it's a cinch to find and command from the saddle, regardless of glove type/density.

Two rapid but definite presses bring it to life, and there are two 'cycles' available. In standard you get four modes: high (default initially, though it'll turn back on in the last mode used after that), with subsequent prods bringing on low, then pulsing, then flashing, which are 400 and 200 lumens apiece. The second cycle cuts out the flashing and pulsing modes, so you can just toggle between high and low – like main and dip beam on a car – which is handy when you're out on the open road in the dark and want to see where you're going without blinding oncoming traffic.

By my reckoning, the lower settings strike a sensible balance between output and economy for town and gloomy afternoons. That said, orbiting some sections of Coventry's notorious ring road, I felt a lot safer unleashing the full 400. Pulsing proved more effective in this context, given that I needed to stand out rather than navigate.

Beam projection to some extent compensates for the absence of a cutaway lens, but, while better than nothing, I'm not convinced the amber side windows add much presence when negotiating roundabouts and turning right.

I tend to think that 400 lumens is a bit weak for negotiating dark lanes – or at least requires a lot more concentration, even around 15-16mph – but output in this instance isn't bad. Picking out the detail was fairly easy, especially on clear nights. The spot-and-flood hybrid beam doesn't match higher end models – halos and 'bokeh' blunting my fun – but it's adequate for semi-rural work, up to a steady 18mph or those situations when you've given the best bike an airing and time has evaporated.

> Read our guide to the best front lights for cycling

Burn times are refreshingly good. Many of this type tend to conk out after 90 minutes or so. Electron reckons 3 hours in the highest setting; I've managed 10 minutes on top of this, although was initially perturbed when the battery indicator turned amber-40% after 30 minutes.

It was another 2 hours before slipping into red, though, when 16% meant 40 minutes' grace before I was plunged into darkness and limped home with a powerful blinkie. Low gives a moderate 4:30 – potentially a week's middle distance suburban commuting between charges.

Pulsing is arguably better. Once I'd become accustomed to the very brief dimming motion, I was still able to navigate semi-rural stretches at 16mph. The pulse also proved more useful when turning right, or entering the flow of traffic.

Finally, we have our old friend, flashing. Easily bright enough for daylight duties, it's a perky setting that friends reckon stood out from a good 250 metres along the back lane doubles, and 90-odd through town.

Generally speaking, Electron has the important things sussed, and settings ensure it's more usable than torch types capable of 600-odd lumens for an hour or so and long charge times in between. An automatic cut down would be a handy failsafe, even if it just defaulted to flashing, but otherwise, I've been pleasantly surprised by its versatility.

I'd describe it as a versatile commuter plus model with decent run times and enough navigational power for semi-rural riding.

So far it has resisted persistent, wintry rain and provocative blasts from the garden hose with no problems. Two-year manufacturer guarantee against defects is also reassuring.

Quality of output wasn't on par with some boasting similar numbers but has proven itself a good all-rounder.

The F-400 has a decent range of settings, which strike a sensible balance between output and economy. 3hrs 10 in the highest setting was pretty impressive from this genre and the switch's integrated battery life indicator gives easy reference. I was initially unnerved by the speed at which it went from green to amber, especially in the constant settings. However, it's proved surprisingly accurate and even red buys a decent amount of time, greatly reducing the likelihood of being plunged into darkness. That said, an automatic fail safe that defaulted to flashing once reserves hit a certain point would have been handy.

Charge times are a little pedestrian, and might preclude zero to hero workplace refuelling.

Would you consider buying the light? Possibly

Would you recommend the light to a friend? For commutes and training rides that take in some semi-rural sections, yes.

Overall a good torch type model for riders straying beyond the suburbs, but not everyone will be endeared to its relatively long charge times.