8
10
Inspired idea from one of the most fun-loving cycling teams on the professional circuit
Weight:
450g
Contact:
www.rapha.cc
How we test

A lot of books are produced in the run-up to Christmas, and a lot of those are annuals. The sport of cycling has never really played a part in that market... until now. The first EF Gone Racing Annual comes from the EF Education First pro cycling team, and reflects the high-spirited nature of the team.

This is the time of year when we see the greatest number of annual publications, just in time to capitalise on the seasonal gifting market. Some contain original material in the style that has been produced periodically throughout the year, such as The Beano; another group are a 'greatest hits' of the year, such as Private Eye; with others, such as with Strictly Come Dancing, there is novelty in the format, as well as with any new content.

The EF Annual is one of the last group – although is more in the style of the first category, describing itself as 'colourful, exciting, and lighthearted'. It is totally appropriate that a pro team with such an unusual outlook on racing produces a book like this, and I can't imagine it fitting the image of many other teams. As a bonus, it even has editorial input from our own Jo Burt.

As you might expect, the Annual gives coverage to some of the team's main achievements on the road, using the medium of a cartoon strip to tell the story of Alberto Bettiol winning the Tour of Flanders, and Hugh Carthy winning the last stage of the Tour of Switzerland. 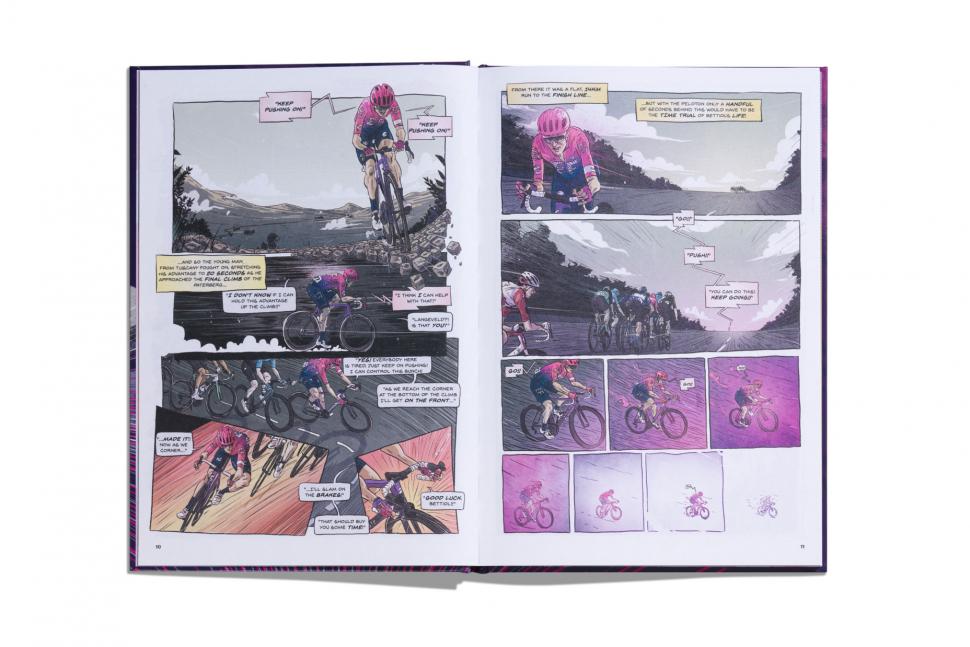 The team is hardly spoilt for choice for results to pick from, but fortunately they could also draw from the 'alternative calendar' that some EF riders have been following this year, with Lachlan Morton's win at the GBDURO surely being the highlight. Racing in these non-traditional events is one thing that sets the EF team apart from others in the pro peloton; another is surely the use of 'Argyle the crocodile', the team mascot. He is someone dressed up in a cartoon crocodile costume, resplendent in the team's bright pink colour. He has his picture taken at various races, and his followers can see the results on Instagram and Twitter – with a selection included in this Annual. He will bring a smile to your face in much the same way as the 'Cycling Beefeaters'. 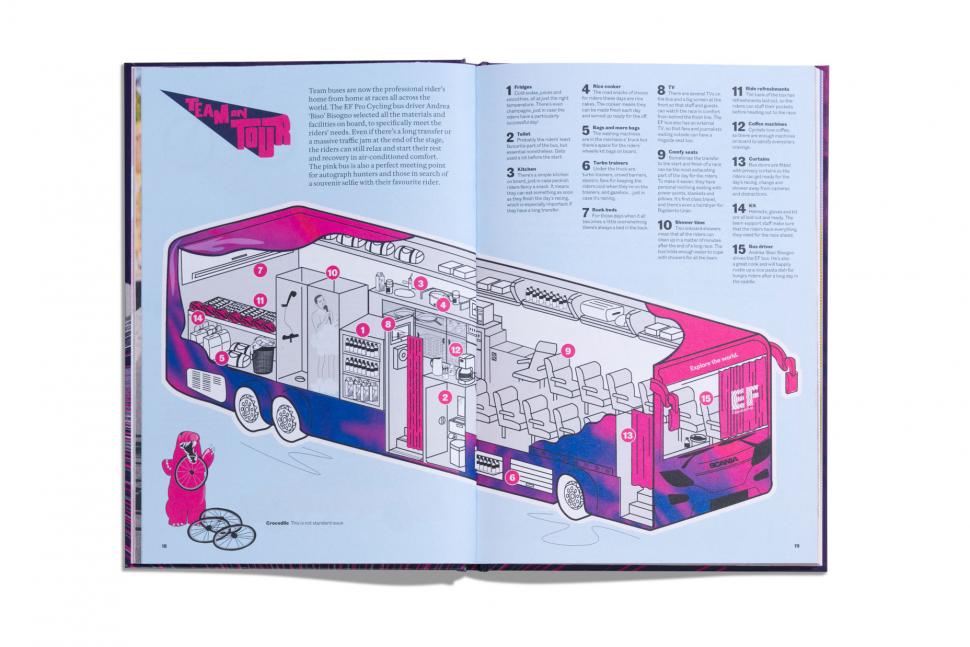 Could any other team pull that off with such style?

The Annual also wants to be 'insightful, factual and informative', which it is. In order to check on how well you have been paying attention there is a somewhat eccentric quiz (which is in keeping with the rest of the book), in which one of the 20 questions asks: Which member of the EF team clips his leg hairs rather than shaving them? The answer seems to be 'un-Googleable', maybe you'd like to guess in the comments below...

The quiz is one of many games that are a staple of such books. There is also a board game, a maze, a spot the difference, and a word search. In that respect it reminded me a bit of another book on my bookcase, the Grand Tour activity book. You can also design your own kit, at which point you are reminded that you can create your design in real life though the custom programme from team sponsor Rapha.

Many of the roles within the team's support crew take their chance to have a say, starting with the soigneur ('definitely the unsung hero of a cycling team'); later on a directeur sportif gives his view on sticky bottles (which are 'never really used at the front of the race to change the outcome' apparently), and race radios (where 'getting rid of them would make zero difference'.) A mechanic notes that 'you don't really need to fix bikes now. We're more like parts replacers', and a chef reveals that 'I only cook for the riders. The rest of the team has to eat separately'.

I doubt this Annual will ever trouble the higher reaches of the best-sellers list for similar books, such as on Amazon, but it's easily the match of some that do feature there. Incidentally, you will notice that most of the publications call themselves the 2020 Annual, and although Rapha Editions calls this the 2019 Annual on its website, the book itself simply says 'number 1'.

Whatever it's called, I hope that it appears again. It's entertaining, informative, and could become one of the better Christmas present solutions for keen cyclists.

"What a year it has been for EF Education First. From the cobbles of Flanders to the high mountains of France, the men in pink have been a force to be reckoned with all season long on the road, and that was just the start. With several riders mixing off-road and ultra-endurance events in alongside the WorldTour, it's been a season unlike any other. Relive the season's greatest moments in cartoon form, go behind the scenes on the team bus and test your knowledge of the roster in our tough quiz. Get to know all the members of the team, from riders you watch on TV to the backroom staff you don't get to see. And hear from team principal Jonathan Vaughters and Education First President Mary Wittenberg in exclusive interviews with this, the official EF Education First Pro Cycling Annual, the next title on any cycling fan's reading list."

Would you consider buying the product? Yes – but preferably not at full price.

The Annual fits in perfectly with the reputation of the team, and (I believe) it is currently the only publication of its type from the sport of professional road cycling.