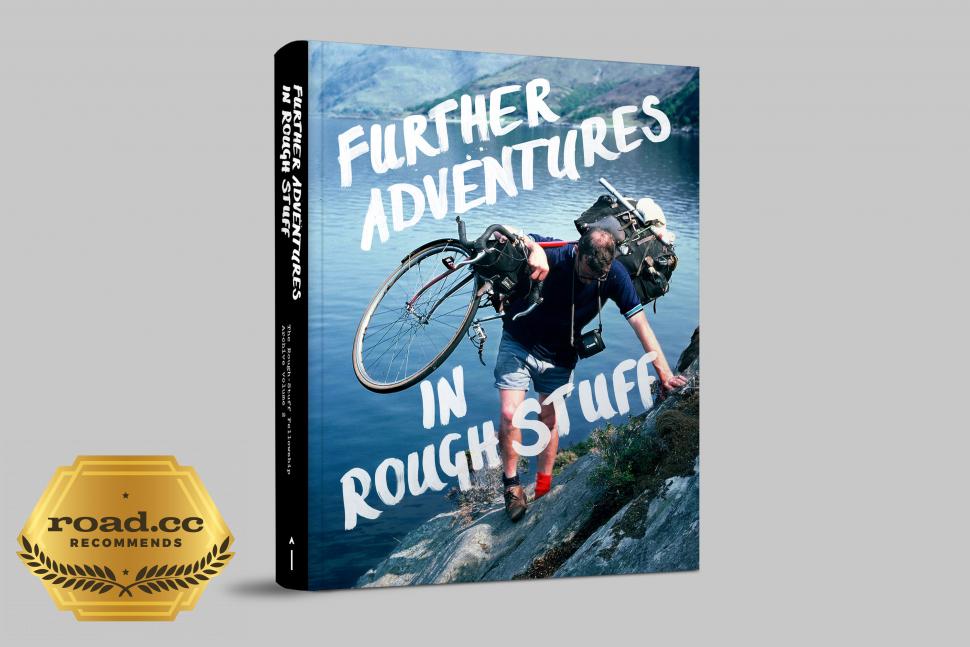 9
10
What was off-roading like before gravel riding, bikepacking and mountain biking? The RSF has the answer: still possible
Unadulterated heart-warming nostalgia
Some low image quality, but understandable...
Weight:
895g
Contact:
www.isolapress.com

Further Adventures in Rough Stuff provides another tranche of images that capture the exploits of Rough-Stuff Fellowship members. Long before it was fashionable, these intrepid cyclists were undertaking trips that were not always advisable on a bike, and fortunately plenty of it was captured on film (or even slides). This book, and the previous volume, provide us with the opportunity to marvel at their achievements, and understand the challenges of off-road cycling 'back in the day'.

In March this year we told you that the crowdfunding for Further Adventures in Rough Stuff had been launched, and the resulting book is now available. We also covered its predecessor in January 2019, and they are effectively volumes one and two.

Although we didn't review The Rough-Stuff Fellowship Archive at the time, it's every bit as good as was promised on Kickstarter, and set a high standard for its successor to follow – which it has comfortably achieved.

Then, as now, the result is numerous images of cyclists showing 'how far an ordinary bicycle and a can-do attitude can get you.' Remember that in many cases those pictured are taking (I hesitate to say riding) their one and only bike; these folk won't be worrying about suitable gearing, tyre clearance, flared bars, or whatever else people sometimes obsess over. They're just getting on with it, even if their bikes often seem to be more of a hinderance than a help.

The idea reminds me of Shoulder to Shoulder from The Horton Collection, because, as was the case there, a large number of images were available but it took a lot of effort to make them useable: first, the difficult decision of selection, then the scanning, and finally 'minor colour corrections and the removal of dust and major blemishes' if required.

Never is the old adage of 'a picture being worth a thousand words' more true than it is here: the book is primarily about its pictures, and from what we have reproduced here you will be able to make your own assessment without me having to convince you of their considerable merits.

And as with Horton, if those images are not given a purpose, then most would be doomed to deteriorate further, and eventually we would lose a valuable and irreplaceable resource. 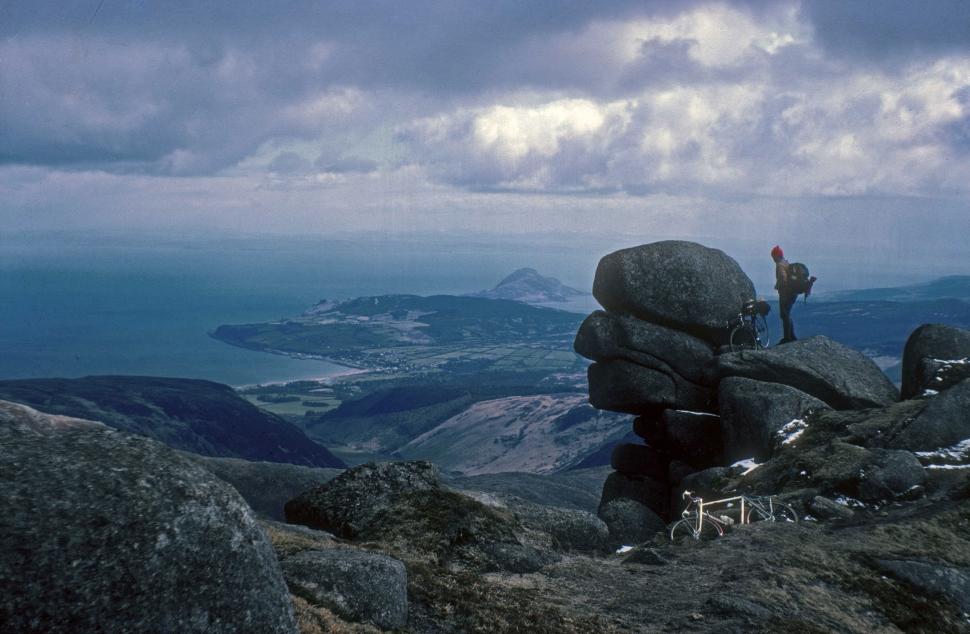 Alongside the pictures are a few ride reports and articles of the time, which tend to be about anything but the bike – and only serve to confirm what the pictures suggest: that their bikes accompany them to some pretty amazing places, regardless of the challenges in doing so. Challenges such as navigation, terrain, weather – still they keep going, and look like they are enjoying themselves. 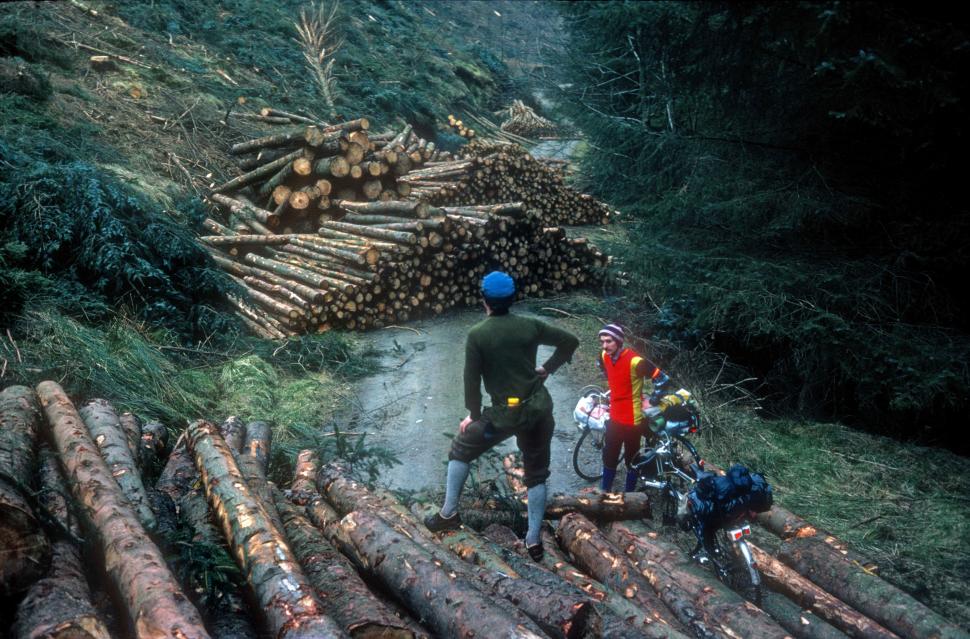 Something that I didn't expect was 'a little-known connection between the RSF and the pioneers of mountain biking'. It turns out that Charlie Kelly and Gary Fisher were members of the RSF, and there is a reprint of an article that the former contributed to the club journal in 1982; even better, Wende Cragg managed to supply a few of her photos, just as she did for Being Gary Fisher. I am so pleased that there was someone with a camera in those early days of mountain biking.

One difference this time around is that the book is grouped into geographical areas rather than seasons. This suited me rather well, because the pictures of my former team-mate George Berwick were concentrated into the Scottish section. I used to hear stories of the conditions he enjoyed (or should that be endured?) during his off-road cycling adventures, and at the time thought that some of the antics sounded improbable. You can read an interview with him here, which reveals more about proper rough-stuffers like him and their exploits. Only now can I see that that not only were the stories true, the reality was often even more extreme. Based on the evidence here, he seemed to go out of his way to make life hard for himself. It's the same for the others featured throughout the book, yet all you see is happy smiling faces – often under a bobble hat.

Both volumes are still available for those who want more of this unique insight into a somewhat eccentric branch of cycling. Even better, I am assured that there is plenty of material available for further volumes, it's just a matter of time and money – and presumably a suitable name, having avoided the obvious route of sequential numbering.

The Rough-Stuff Fellowship was established in a pub near the Welsh/English border in 1955, making it the oldest off-road cycling club in the world.

In 2018, the club appointed an archivist, and the photos, hand-drawn maps and memories poured in – an unexpected treasure trove of incredible value and beauty.

The photos are full of the joy of riding your bike, and evocative of a bygone style – of a time when you might set off on a club ride wearing a shirt and tie, a deerstalker or a bobble hat, and no ride was complete without a stop to brew up some tea and smoke a pipe.

In their own quiet, very British way, these men and women were pioneers, pedalling and carrying their bikes and pitching their tents where angels feared to tread. Mountain bikes, gravel bikes, bikepacking – they all followed in the tyre tracks of the RSF.

The first RSF book, and the new Volume 2, Further Adventures in Rough Stuff, celebrate their style and their spirit. They are documents not only of the history of cycling off the beaten track, but of British outdoor culture.

The opportunity to view images that you are unlikely to see anywhere else.

It would be churlish to wish for less grainy photographs; in reality I am grateful for what we do have...

The book is expensive for a softback with this number of colour pages; however, some allowances have to be made for small print runs and the challenge of working with old material.

I would apply the same rating to both volumes, as both show a rather eccentric side of British cycling that attracts little mainstream publicity. The subject may be of limited appeal to most, but producing the books is probably the only way that such historically important pictures will ever be seen – and made accessible to current and future generations. A laudable mission, done well.