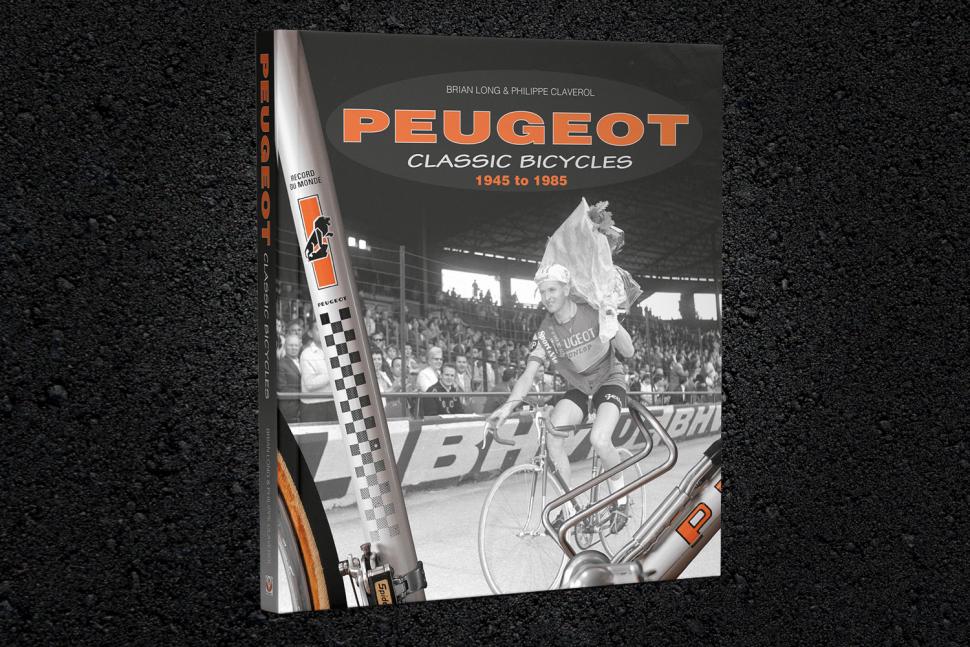 7
10
An overdue history of the bicycle brand and its successful racing teams, if limited in appeal
Welcome coverage of a much-loved brand
Difficult to read most of the pages from old catalogues
Weight:
820g
Contact:
veloce.co.uk
How we test

In Peugeot - Classic Bicycles, authors Brian Long and Philippe Claverol give one of the oldest bike brands some welcome English language coverage, with machines used both by the Peugeot racing teams and available to the public included. It will be a useful reference book for some, and a coffee-table book for others – although without excelling at either.

What does the name Peugeot mean to you? If you are on this website you will probably be aware of it as a brand name on a range of bicycles; older readers will also remember when Peugeot bikes were used by some of the finest racing cyclists, under various team names – and with one of the most desirable jersey designs.

The general public may be more familiar with the Peugeot name from its automotive use, though, so it is perhaps appropriate that this book comes from a publisher better known for 'sharing our passion for all things automotive for 30 years', Veloce Publishing. Given that motorised bias, who is going to do the cycle side justice?

First up is Brian Long. It's safe to say that he likes writing about cars – but he also likes 'the golden years of [cycle] racing'. It is also safe to say that he is thorough with his facts and figures: his 'definitive history' of the Porsche 911 runs to six volumes already, and he's only got to 2012. It's the sort of detail that you want in a reference book, but it doesn't make for light reading.

Co-author Phllippe Claverol is a Citröen executive who has 'strong links with the PSA factory' (Peugeot provided the 'P' to the PSA automotive group, which is now part of Stellantis) – and is therefore well placed to access the archives. We're told he also has a 'love of old school cycling and bicycles in general'.

Between them, they sound like quite a good team for the job.

Despite the full title of Peugeot - Classic Bicycles 1945 to 1986 suggesting otherwise, the book covers all years of the brand so far. 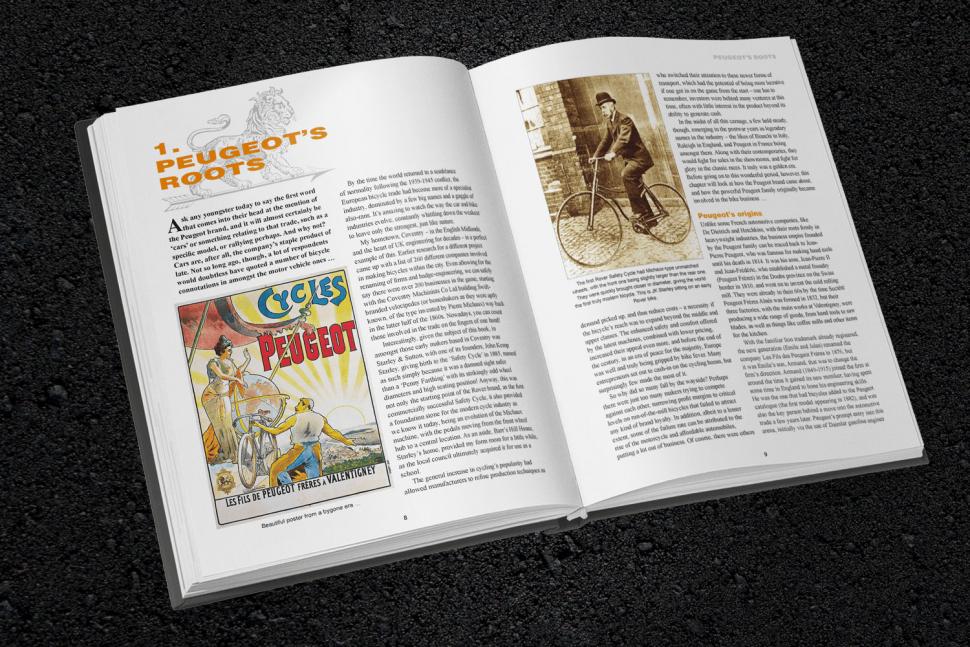 At the start 'Peugeot Frères' was actually 'producing a wide range of goods, from hand tools to saw blades'. These were joined by the Grand-Bi 'Penny Farthing' in 1892, followed by cars, and then motorbikes.

The majority of the book is taken up with a description of the various ranges of bikes produced over the years, complete with information such as pricing, marketing, and specifications. The story of the racing team is intertwined with that, and it was the two together that contributed to the brand's success. 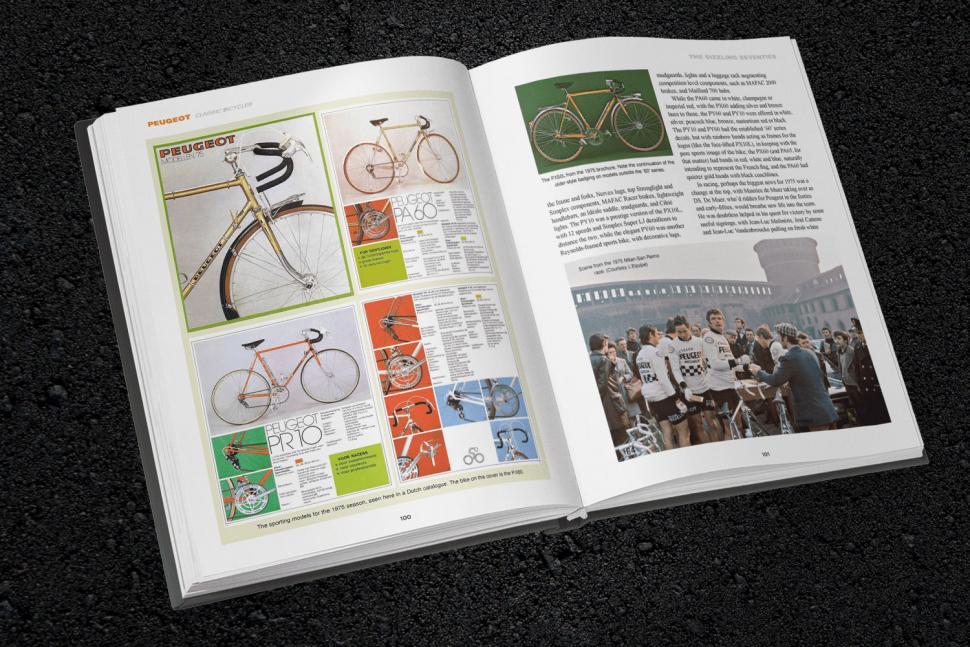 The business side receives the least attention, covering things like the relationship with the automotive side, licensing arrangements, and the building of factories. Given that the focus of the book is about the bikes more than the business, this is to be expected – although I would happily have had more of it.

Along the way, Long and Claverol look at 'other makers and leaps in technology to add perspective'. This includes a reduced history of the Tour de France, which was obviously important to the race team, but I felt that most of this is already covered elsewhere and was unnecessary. Only some aspects affected Peugeot bikes directly and warranted the coverage – such as the banning of derailleur gears in le Tour for several years, even after they had already been used in the Giro d'Italia.

Equally, I questioned the need for a brief introduction to rival brands, such as Colnago or Raleigh, whereas I could see the point for manufacturers that supplied components to Peugeot, such as Mafac and Simplex.

The roster of riders in the race teams over the years is extraordinary, and at various times included Eddy Merckx, Tom Simpson, and Robert Millar (as was). Under different circumstances it could even have included Greg LeMond with the Z team, but 'a special contract was written allowing him to use his own LeMond TVT bikes'.

The decline of the brand on both the sporting and commercial stage looks inevitable with the benefit of hindsight: choosing to partner with the Festina team during 'peak EPO years' wasn't the best idea, and irregular licensing agreements didn't help with continuity of supply – especially when accompanied by changes in ownership.

The book finishes with 'a lighter review of what Peugeot has been marketing in more recent years'. It will take a lot of bold decision-making for the brand to return to its previous heights, so we probably have to accept that its heyday has passed.

With 285 pictures, the book lives up to the claim of being 'heavily illustrated', as required by any publication seeking coffee-table credentials. Some of the images are regular racing shots, but most are pages reproduced from catalogues; unfortunately, the resulting text size is often small and barely legible, which at least makes the fact that most of it is in French largely irrelevant (for those who don't speak good French).

There aren't many books about bicycle brands available; some are extremely limited in scope, and others provide interest beyond the machines in question. Peugeot falls in between the two – it covers more bikes than the narrowly focused Lotus book, but is not as business-orientated as the Cervélo one. It is likely to be essential reading for those interested in the brand (and its associated race teams), but any broader appeal will probably be limited.

An overdue history of the bicycle brand and its successful racing teams, if limited in appeal

This heavily-illustrated book takes a nostalgic look at Peugeot's road and race bicycles during the golden era between the sixties and eighties, with coverage before and after to complete the story - something long-overdue in the English language.

This book, written with the full co-operation of the factory, brings to life the golden era of Peugeot bicycles. After a brief look at the company's pre-war days, the richly-illustrated pages focus on a period when the Peugeot name was synonymous with the Tour de France and racing, and brings the story up to date with coverage of later machines. Both road and race bikes are looked at in detail, with the book written in a fashion that makes it equally suitable for both reference and as a coffee table tome for the enthusiast.

* The complete history of Peugeot bicycles in the classic era.

* Focuses on the 'golden era' of cycling.

* Introduction to the early days of Peugeot.

* Light coverage from 1990s up to the present day.

* Road and race bikes are covered, with emphasis on the latter.

* Records all major post-war race entries for the works team.

* Looks at other makers and leaps in technology to add perspective.

* Written with the full co-operation of the factory.

* Serves as a rare English-language record of the company.

The aim is to provide lots of information about Peugeot bikes, which it does.

Brings back memories of a better time for the brand, both in competition and retail.

The small size of images makes it hard (or even impossible) to read the pages from catalogues that have been reproduced.

Would you consider buying the product? I like the idea, but not sure if I am that much of a fan.

Would you recommend the product to a friend? Selectively, to those who are interested in the brand.

It's a decent reference book and coffee-table book in a niche area, albeit with some flaws and distractions.