Scott has launched a new Addict RC with a focus on aerodynamics and integration whilst maintaining the low weight this bike has always been known for since it first debuted in 2008. But it's really all about the brand new handlebar and stem that provides full internal routing for electronic and mechanical disc brakes.

Oh, it's disc brakes only too I'm afraid, which we guess means the Mitchelton team will be racing disc brakes at the Tour de France in a couple of weeks time.

The Swiss company boldly claims the new Addict RC is “the benchmark road bike when it comes to racing” so it’ll obviously satisfy the demands of the Mitchelton-SCOTT professional team, whilst also appealing to everyday riders, claims Scott.

Integration has been a hot buzzword in the road bike world for a few years now. It generally means a frame and components designed in harmony with full internal cable routing to eke out as much performance as possible. They both share the ability to internally route brake hoses and gear cables or wires directly into the frame. The cables enter the front of the enlarged head tube and then into the down tube to continue their journey to derailleurs and callipers. 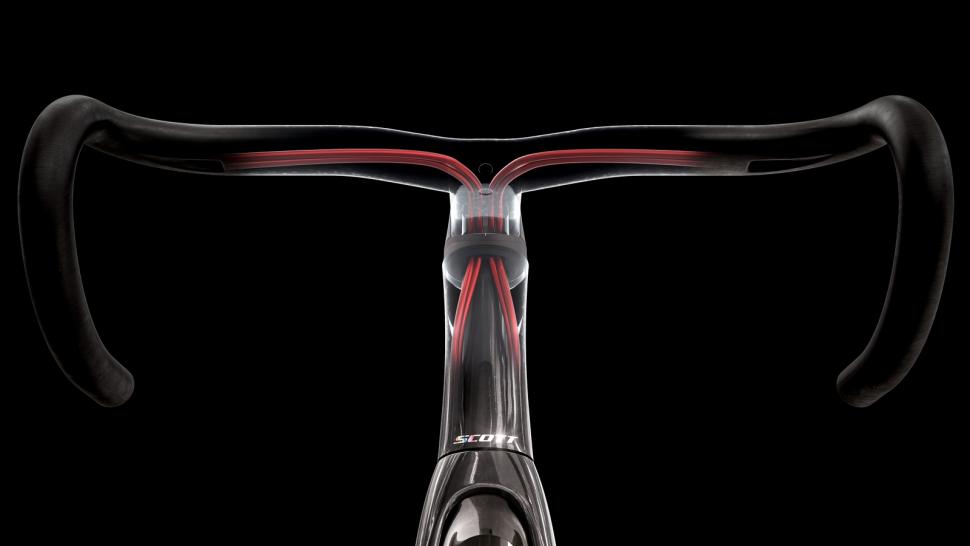 Scott calls this new head tube and steerer tube the “Eccentric Bicycle Fork Shaft” and consists of an offset headset bearing that provides just enough space for mechanical and electronic wires and hydraulic hoses to be internally routed.

The design solution is one of the few that also internally routes mechanical gear cables. Many of the newest bikes only route electronic wires, leaving the mechanical cables on lower specced models externally routed. All this integration sounds like a mechanics nightmare, but the company is keen to reassure us that it’s easy for mechanics to change cables and maintain the bike.

The handlebar also has an ergonomic shape and bend that has been developed with Gebiomized. The tops have an oval shape, the hoods a smooth transition to the drops and a compact bend shape with a slight 2-degree flare.

The full-carbon one-piece handlebar has a layup has been configured to provide a 26% improvement in sprinting stiffness and a 27% increase in compliance compared to its previous handlebar. Even the printed graphics are designed to provide extra grip. Integration also extends to out-front computer mounts. 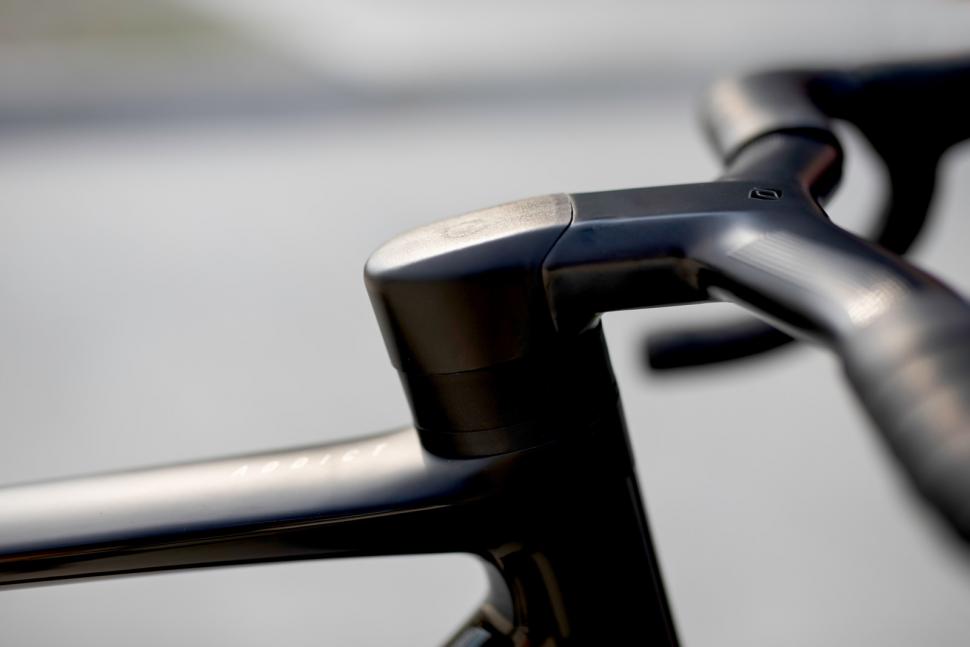 The two-piece handlebar and stem provide fit adjustment, the stem can be swapped for one of a different length, getting away from the restrictions of the previous generation one-piece aero handlebars. The stem can even be swapped without needing to bleed the brakes thanks to splittable spacers. 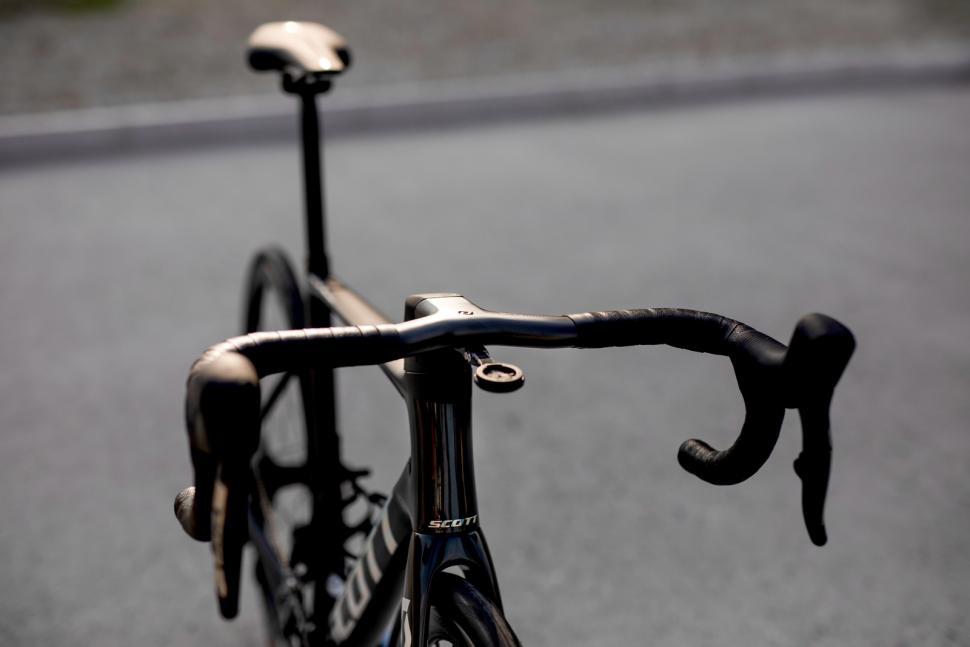 Aerodynamics is the other big buzzword in bicycle design currently, and the Addict RC has been touched by the aero wand. Scott has history when it comes to aero road bikes, being one of the first to market with the original Foil back in 2011.

We’re now seeing race bikes once focused on low weight and high stiffness being given an aerodynamic treatment, and that much is true with the new Addict RC. Scott’s own patented airfoil tube shape has been used for the down tube, head tube, seat tube, seat post, seat stays, with the lowered seat stays that are increasingly widespread on the latest road bikes. Lowering the seat stays reduces drag by decreasing the gap behind the seat tube and seat stays which avoids air stagnation, according to Scott’s claims.

The result is a claimed 6 watt saving at 45kph compared to the previous Addict.

Low weight and high stiffness are still key attributes of the Addict RC and have been given a boost with the redesigned frame. The Scott engineers revised the layup of the ultra-high modulus carbon, creating a “stiffness backbone” that it says increases the bottom bracket stiffness. It has also reduced the number of bonding joints by making the frame out of three parts instead of six to reduce weight. 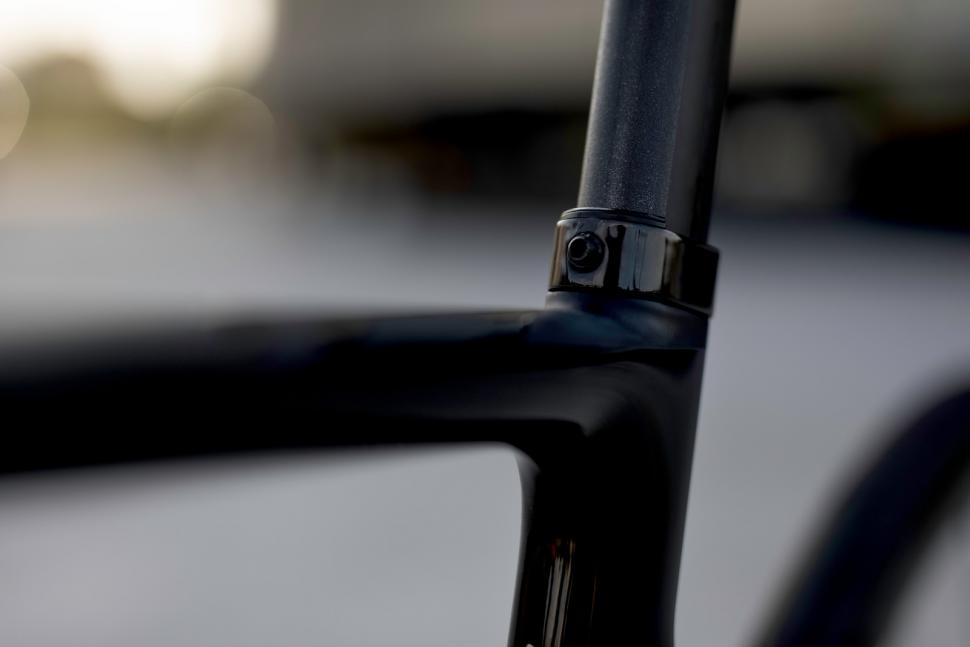 The new Addict RC is also disc brakes only, which does surprise us as the pro team has mainly been racing on rim brake bikes this season. The wholesale switch to disc brakes forces the team onto discs brakes, unless it caves in and produces a special rim brake version. We'll find out soon enough, the Tour de France starts next weekend. The new Addict RC will be available in 10 builds, from SRAM Force eTap AXS up to Shimano Dura-Ace Di2 and SRAM Red eTap AXS flavours, with wheels from DT Swiss, Zipp and Syncros. 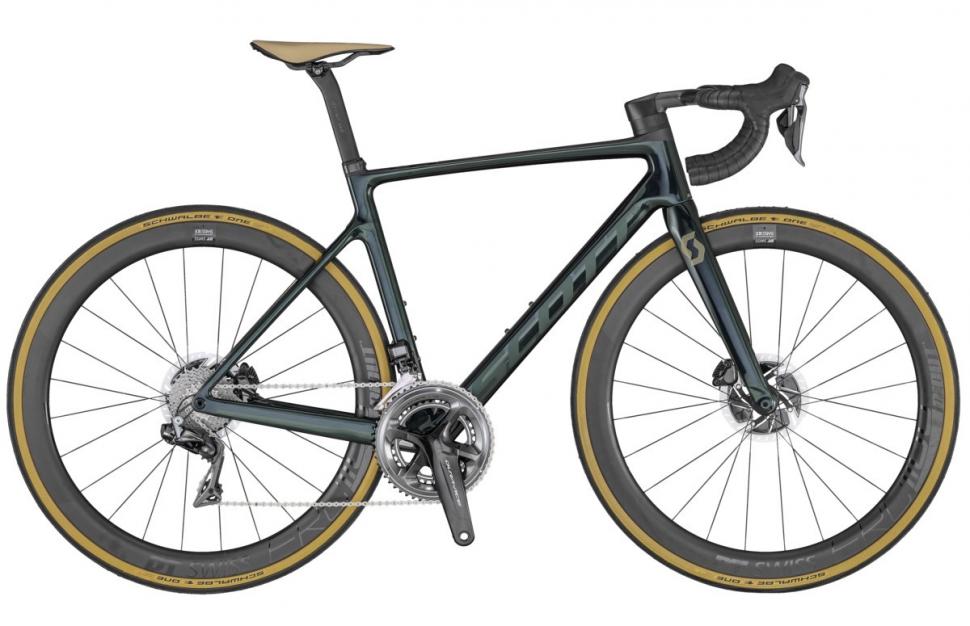