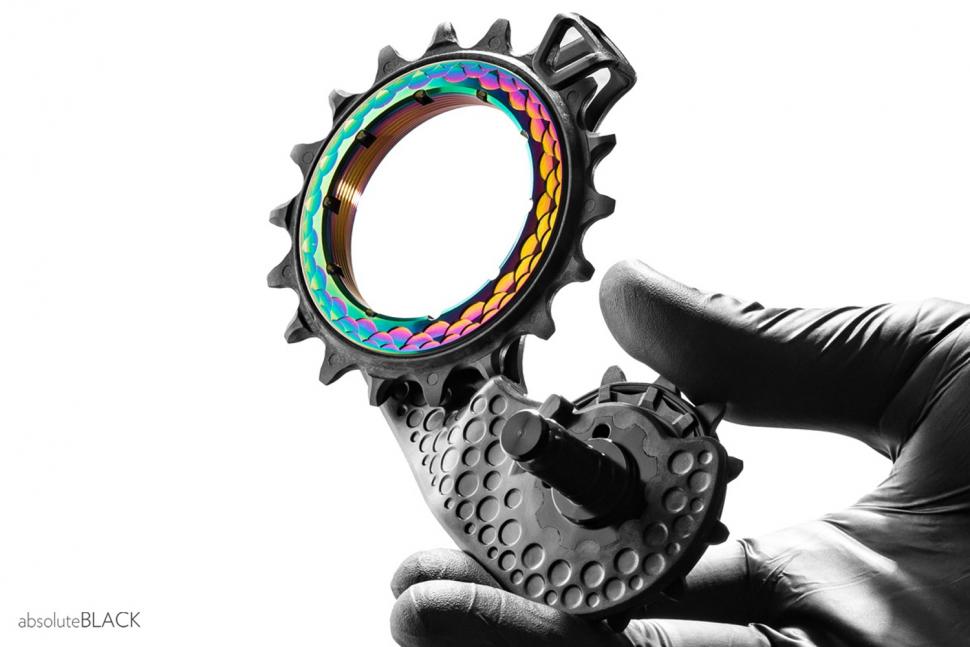 The HollowCage is "the only cage that can dynamically adapt to the variable chainline, minimising friction at the lower pulley” claims the brand behind the innovative GrapheneLube
by Anna Marie Hughes

The Hollowcage isn't the first oversized pulley system - CeramicSpeed can be found in the pro peloton and there are also OEM options from the far east - but the claims of silence and the price point for starters make AbsoluteBlack's offering stand out from the rest. It claims the HollowCage is “almost silent”, and the brand says it has been able to reduce the sound level by 12-14db, which is roughly a 60% reduction in noise compared to standard Dura-Ace pulleys if true. 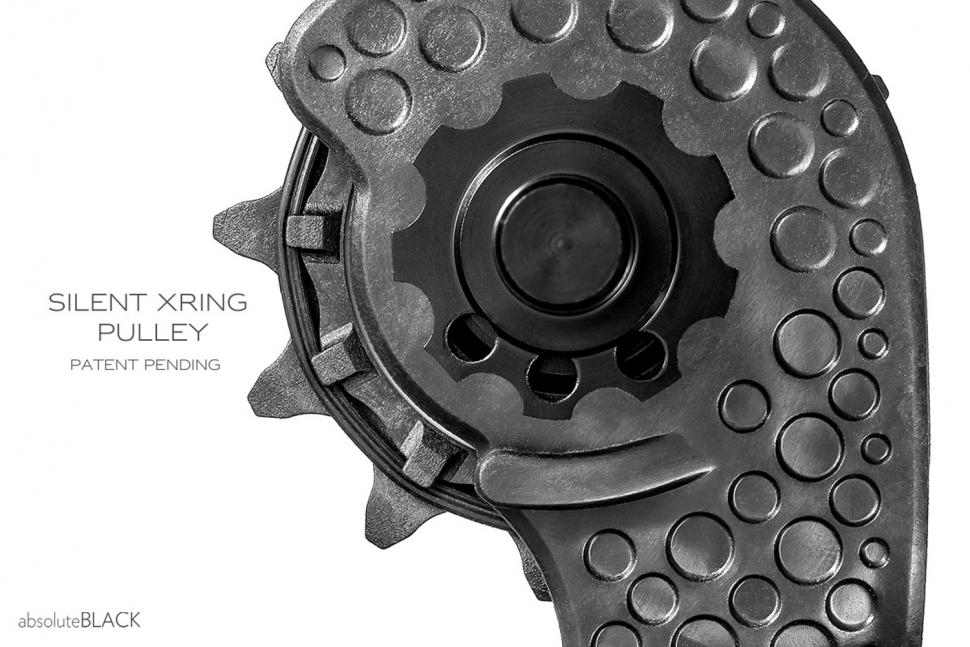 AbsoluteBlack explains that 'xring rubber suspended bands' dampen the chain impact on the guide pulley teeth. This eliminates the engagement noise, which it claims is the single biggest contributor to overall drivetrain noise.

Flexibility is good when its comes to derailleur pulley cages, AbsoluteBlack explains, as it allows the cage and lower pulley to align better with the angle of the chain when using the higher gears of the cassette.

“This means less friction (and less watts lost) as the pulley doesn’t have to fight against the chain itself,” AbsoluteBlack adds. 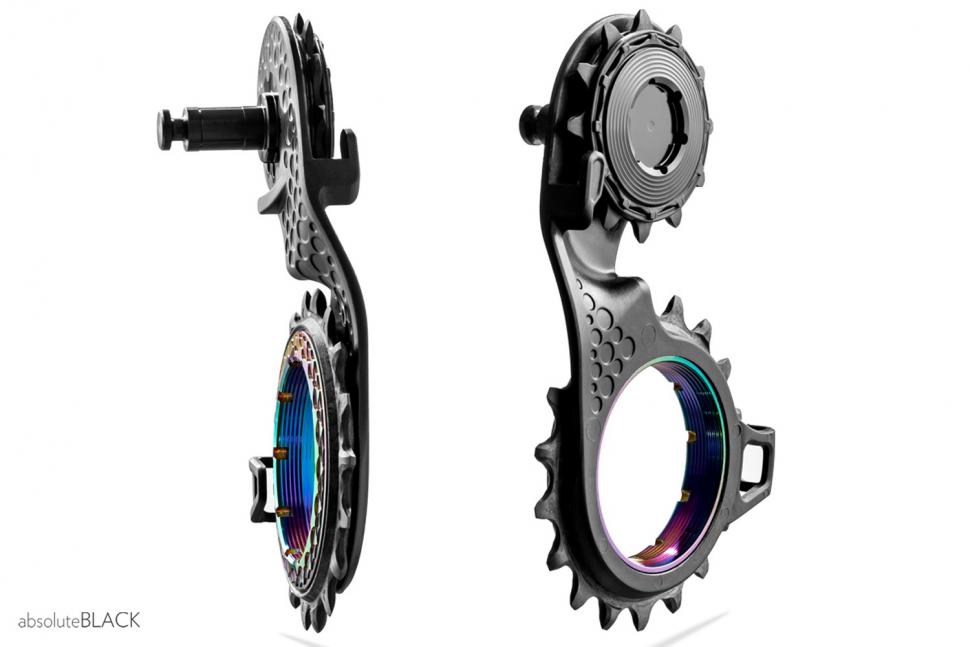 Instead of bending the lower part of the cage slightly outward to align better with the chain when using top of the cassette range, as Shimano has done, AbsoluteBlack has created a mono plate cage that it says “can dynamically adapt to the chain angle”.

The HollowCage also uses very tall teeth profiles for its oversized upper pulley, which provides the best possible shifting precision according to AbsoluteBlack.

AbsoluteBlack tested the HollowCage against the OEM Dura-Ace cage in a bespoke wind tunnel designed for smaller objects, and found that its new oversized cage was more aerodynamic. 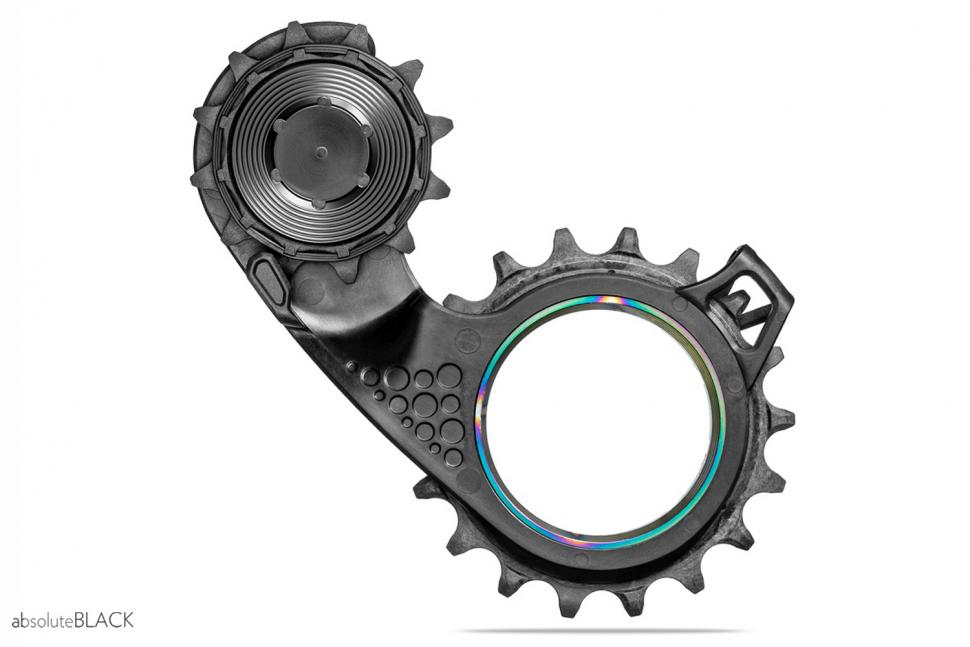 “However, the absolute difference is relatively small, proving that a bigger cage will not set you back and cause any meaningful watt losses, no matter which cage you use,” AbsoluteBlack adds.

AbsoluteBlack explains that while bearing quality and its lubrication, and the number of teeth in the pulleys, can make a difference, the biggest savings come down to the cage spring tension and the ability of the lower part of the cage to align with the chain.

“There is a linear correlation between spring tension and the power losses generated by the cage,” AbsoluteBlack says.

“HollowCage is using lower spring tension than any other cage on the market, while still providing excellent shifting thanks to the unique combination of pulley stiffness and tall teeth profiles.” 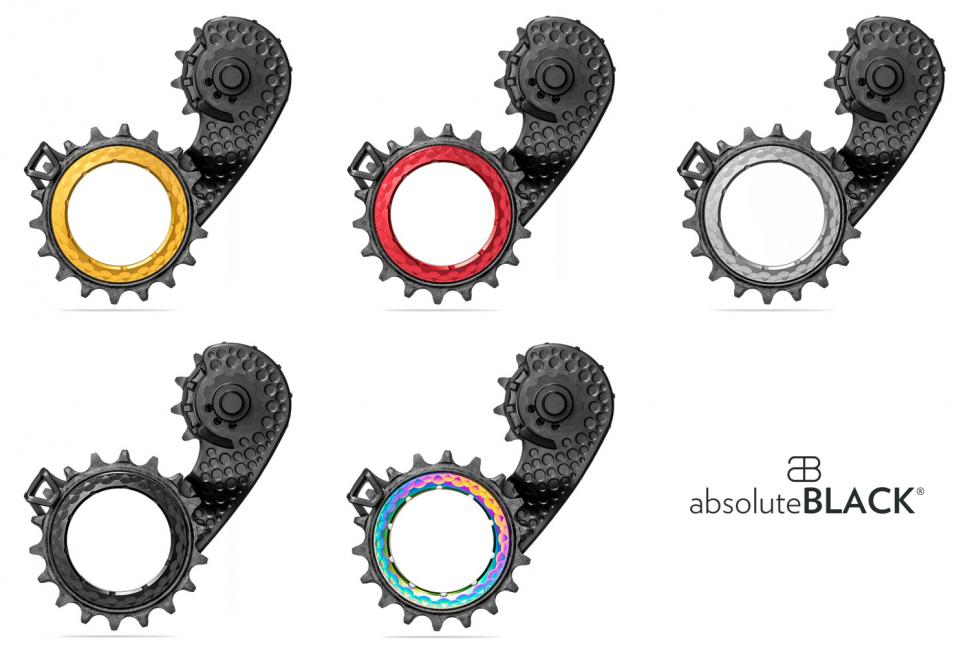 The entire cage also weighs in at just 71g, which AbsoluteBlack claims makes its one of the lightest oversized cages on the market.

There’s no question that AbsoluteBlack like to innovate big time, and they’re rather successful at it too. Last year it was the GrapheneLube, which was the world’ first hydrocarbon-carbon-based chain lubricant containing graphene, with promises of “up to 1800km on single application” along with “3-10W savings over other lubes.” The price was mega high at £114.99, but reviewer Dave Atkinson found that it did appear to be very good at reducing friction losses and it lasts very well outdoors. It's also the lube of choice for UAE Team Emirates and Tadej Pogacar, who haven't done too badly in the last two editions Tour de France.

We’ll be getting a HollowCage in for review to see if it does really live up to these claims like the GrapheneLube appears to...

1
Five cool things coming soon (but on a budget) from Vittoria, Decathlon, Topeak, Hutchinson and Formbeat
2
Near Miss of the Day 812: Van driver hits cyclist during impatient overtake on country lane
3
Cannondale unveils new SuperSix EVO Leichtbau with a mega-light 750g frame
4
Driver who killed two cyclists during charity ride “didn’t understand severity” of incident, says prosecutor
5
Near Miss of the Day 809: “Just doesn’t get closer than this” – Cyclist squeezed between van and kerb at bike lane pinch point
6
Dual carriageway time trials suspended after cyclist killed on A11
7
Road rage motorist assaults cyclist and steals his camera after accusing him of ‘not riding in the bike lane’
8
Near Miss of the Day 810: Reckless overtake towards oncoming cyclist and bus… and some afters from the impatient driver