Deloitte RAB 2019 Tass
Okay, it took three separate attempts, but I got there in the end…

Gale-force winds, lashing rain, the longest distance I’ve ever ridden in one day… oh what fun the final three days of the Deloitte Ride Across Britain! On my third attempt at completing the challenge, I finally reached that bloody signpost in John o’ Groats, and it was brilliant – now that I can look back and laugh about the headwind…

Crosswinds, too, so strong they actually blew people across and off the road. One nearly got me, just north of Lairg.

“Wow, you were so lucky with the weather!” commented one of our road.cc review team, from her home in sunny Gloucestershire, basking in the late summer heat… It wasn’t quite like that in the far north of the UK, though I guess the strong winds and rain kept the midges away.

Of course I didn’t have the same sense of achievement that I would had I ridden all nine days in one go – how could I? But still, three days, 335 miles and, according to Strava, 23,531ft of climbing – including Glenshee and (most of) the Lecht. Not bad. 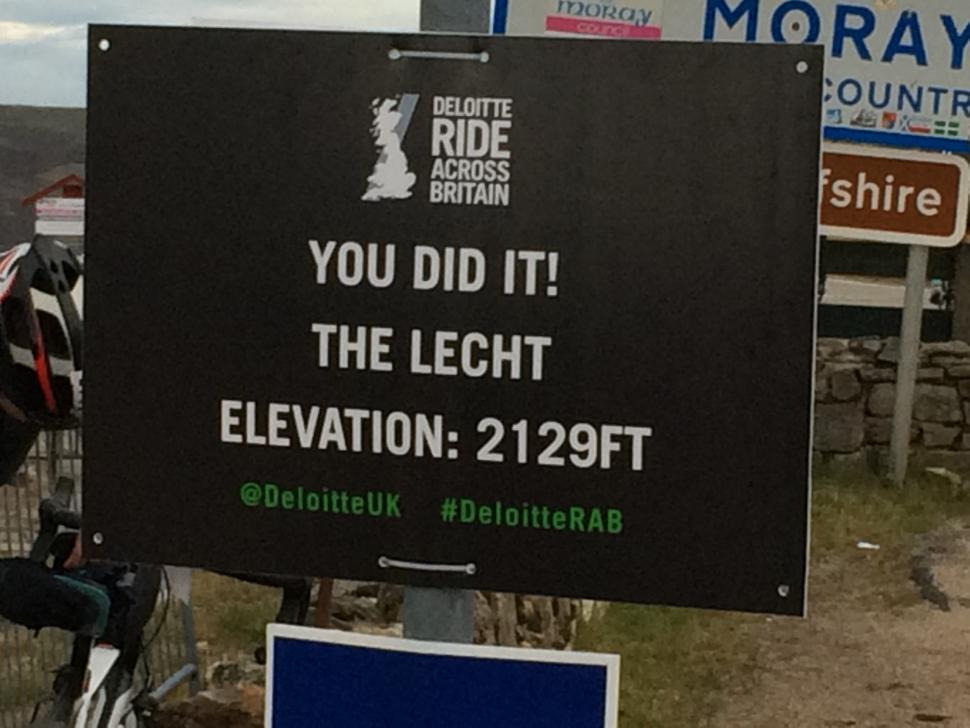 If you’ve read my previous blog reports you might remember that two years ago I set out from Land’s End, intending to reach John o’ Groats nine days and 969 miles later. Five days in and it wasn’t to be. Last year was even less successful: one day in, picking up in Penrith and riding to Edinburgh, then over and out.

Even this year things didn’t go smoothly, with Simon, my husband, having to pull out just a few weeks before the event. He volunteered his services instead, helping out at the pit stops (and having to get up even earlier than me).

Riding alone was a different experience – though you’re hardly on your own, what with 800 or so others cycling the same route. In fact at times I’d have liked a bit more alone-ness – like when I was doing a balancing act knowing that if I rode too fast I’d catch up with music man in front, tunes thumping out of the speaker on his top tube, but if I was too slow, second music man might catch me up. Honestly. Young people and their music. Grr, bah, grumble. 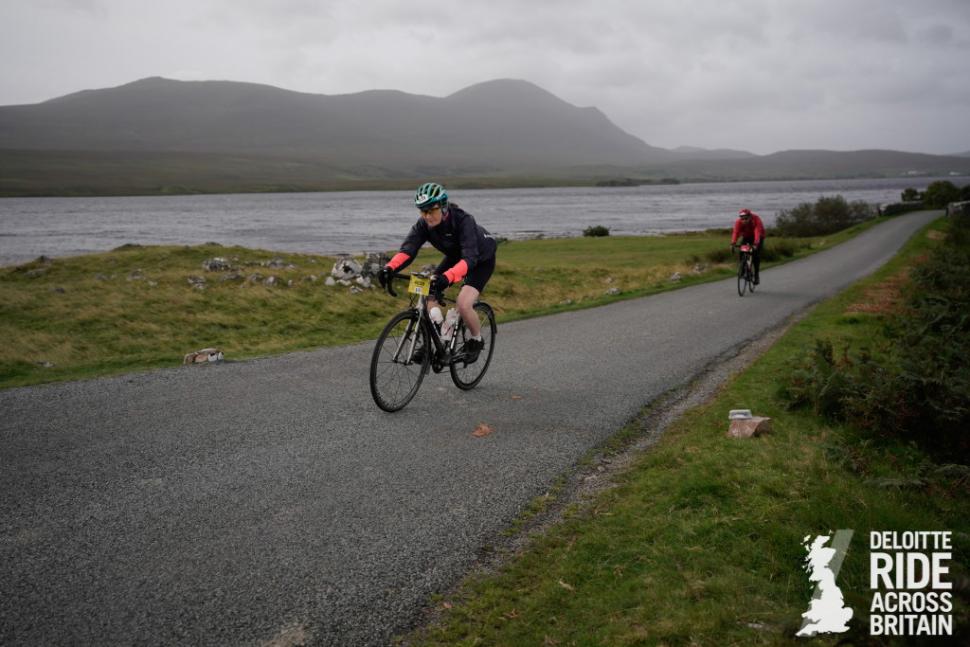 Occasionally I’d find myself cycling at the same pace as someone and we’d strike up conversation for a while, but inevitably we’d go our own ways, our average/climbing/descending speeds out of sync or a need to stop and stretch outdoing the desire to be sociable.

Although I did feel pretty sad that Simon wasn’t with me on these last three days, there was also a freedom in just riding at my own pace. The trouble was, because we’d done all our training together, I wasn’t really sure how sustainable my own pace was. I’m a stronger (maybe just lighter) climber than him, so when we ride together I’m generally slowing down on the hills to stay with him, and because he’s bigger than me, I tend to tuck in behind him on the flat… in fact, I usually get a pretty easy ride. Now, I was having to judge it for myself. 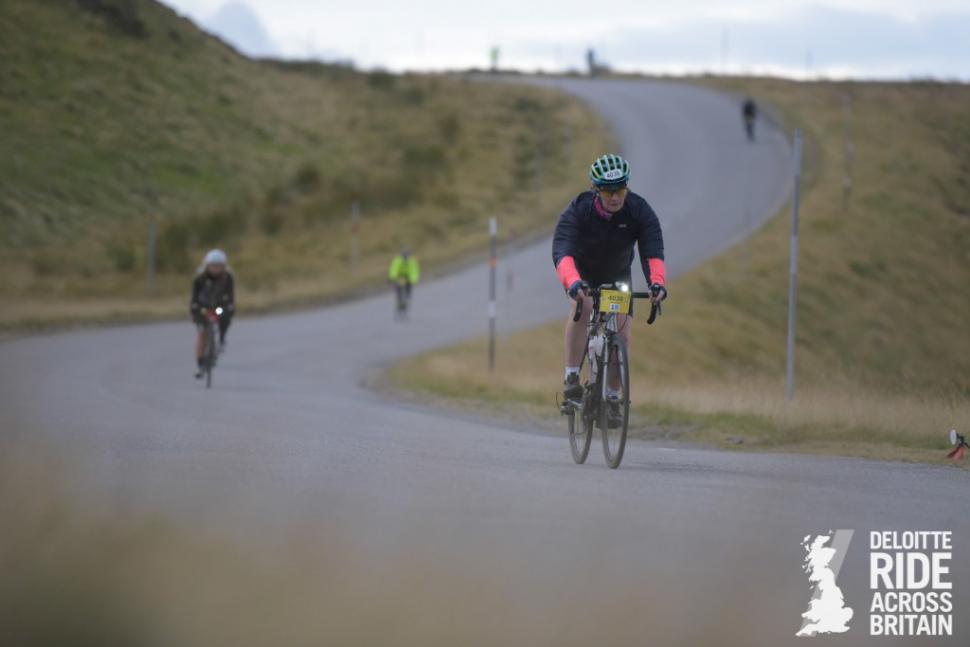 Not that there weren’t offers to join a group… At the time it felt embarrassing that I couldn’t keep the wheel of Brompton man on the last day, when struggling against a ridiculously strong headwind to get my speed above 8.5mph, on the flat… but he was a lot younger than me.

Another offer of help came from one of the Threshold chaperones. It was the middle day, the longest of the three, which began with the Lecht (which I confess I walked the very first bit of) and continued for about 70 miles into the teeth of an almost constant, seriously strong headwind, before things started to turn wet just north of Inverness. 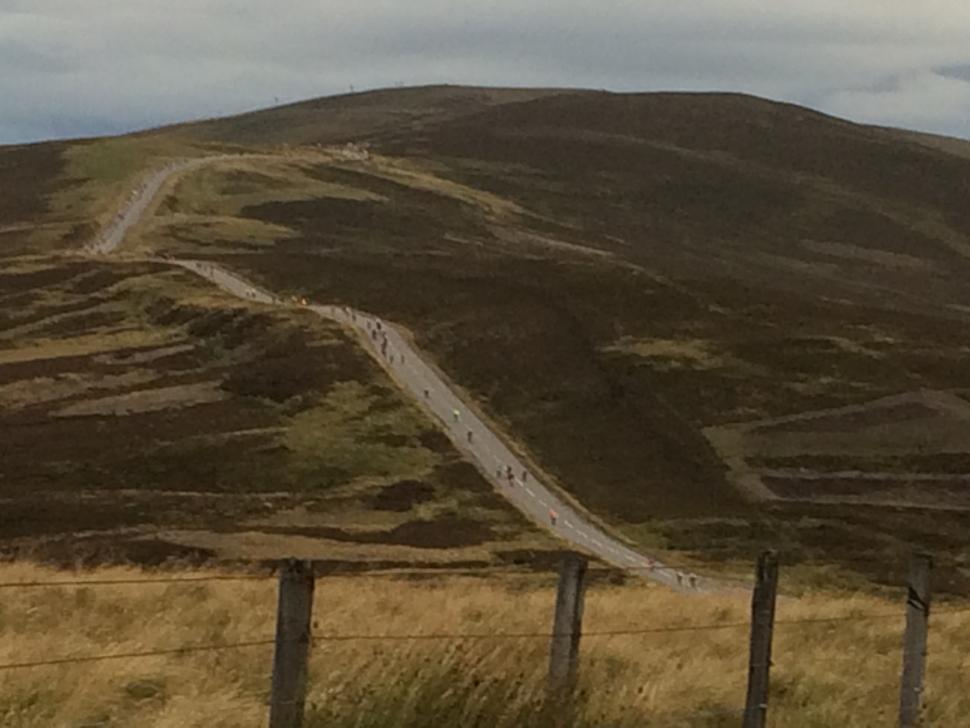 I found myself – sod’s law – leaving pit stop two in a little group that included one of the music men, so I did my best to hang back but was encouraged by chaperone Shaun to try to keep up. I’m not a keen group rider, especially if it includes having to listen to funky tunes I don’t like, but I know it makes life easier and so I tried, honest I did. But having failed – it was fitness not old person grumpiness wot did it – Shaun took pity on me and basically dragged me along to pit stop three.

I felt horribly guilty – I’d only started the ride the day before, and here I was hogging one of the chaperones! I kept telling him he should be helping others, those who’d ridden seven days in a row, not fraudy me… but he was having none of it. We did pick up another rider on the way and helped her to the pit stop too, which made me feel a bit better.

Although the weather wasn’t great – did I mention the gale-force headwinds? – the route itself, through Scotland, was simply breathtaking. (In every sense.) This was the new route, first used in last year’s challenge. It’s hard – Glenshee really took me by surprise, and the lower part of the Lecht was just impossible – but it’s stunning, and so very different to the other parts of the ride. 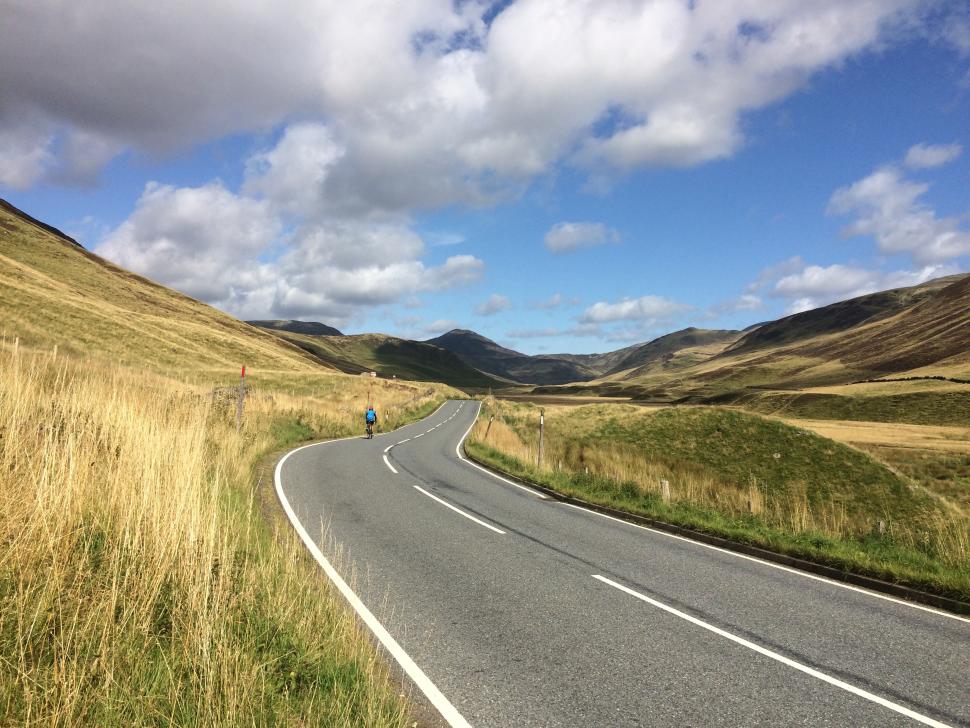 When I first set out on the RAB, Cornwall and Devon were considered the hardest two stages; now I’m not sure that’s still the case. I rode every bit of the first five days in 2017, to Penrith. Okay, I only walked the first section of the Lecht, but I had to stop three times on Glenshee! It was a rather spectacular view, though…

Although it had taken three attempts, I’d done what I’d hoped to: I’d (99.9%) ridden from the bottom of the UK to the top. I’d not only seen but felt the changing landscape – the ups and downs of the South West, the little lanes skirting the border of England and Wales, the increasingly wild scenery north of the major conurbations of Wigan and Leyland and Preston, to the edge of the Lake District, and crossed the border country and into Scotland.

Now, I’d crossed Scotland too. I hadn’t done it all in one go, no, but I hadn’t had any choice in that so there was no point dwelling on it. I’d done it. Bar crossing one road, north of Penrith, because the basecamp had swapped from one side to the other, and a teeny tiny bit of the Lecht, there wasn’t a bit that I hadn’t cycled. 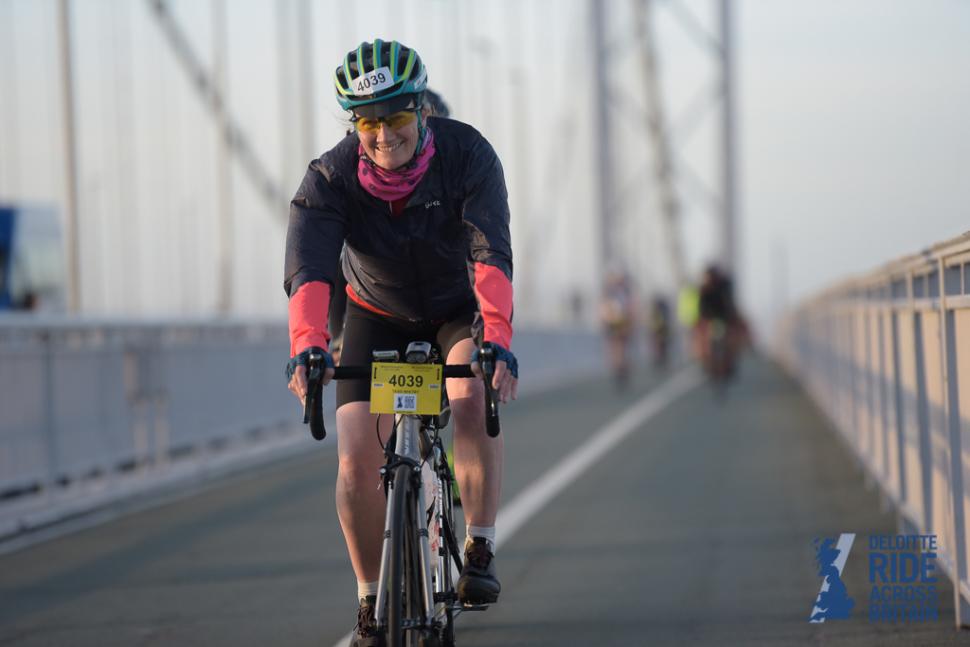 And what now? I admit to feeling a little bereft. Riding the RAB is likened to being in a bubble. You’re in it. Everyone around you is in it. You’re all suffering/celebrating together. You’re all sharing the joy of the 5am wake-up music on full blast. Lulu’s amazing food. The camping.

Some people enjoy it – or the challenge of it – so much that they’ve ridden it numerous times. There’ll be some riders from this year’s event who, doubtless, have already signed up for 2020. You get a special golden jersey if you ride it three times.

Personally, I simply wanted to ride from Land’s End to John o’Groats. It had been on my bucket list for years, and I expect it would have stayed somewhere at the bottom if it wasn’t for the Deloitte RAB.

If it’s a journey you want to make, I highly recommend this way of going about it. It’s not easy – it’s not a leisurely touring holiday, where you pootle along taking in the views and photos, stopping for tea and cake – it’s a challenge. You need to put in the training so you can ride the distances required, within the time limits. Yes, you have 12 hours to ride each day, but it’s surprising how time flies when you’re struggling into a ferocious headwind…

But it’s definitely doable. And the sense of satisfaction when you finish – even if it’s taken three attempts – is just brilliant. 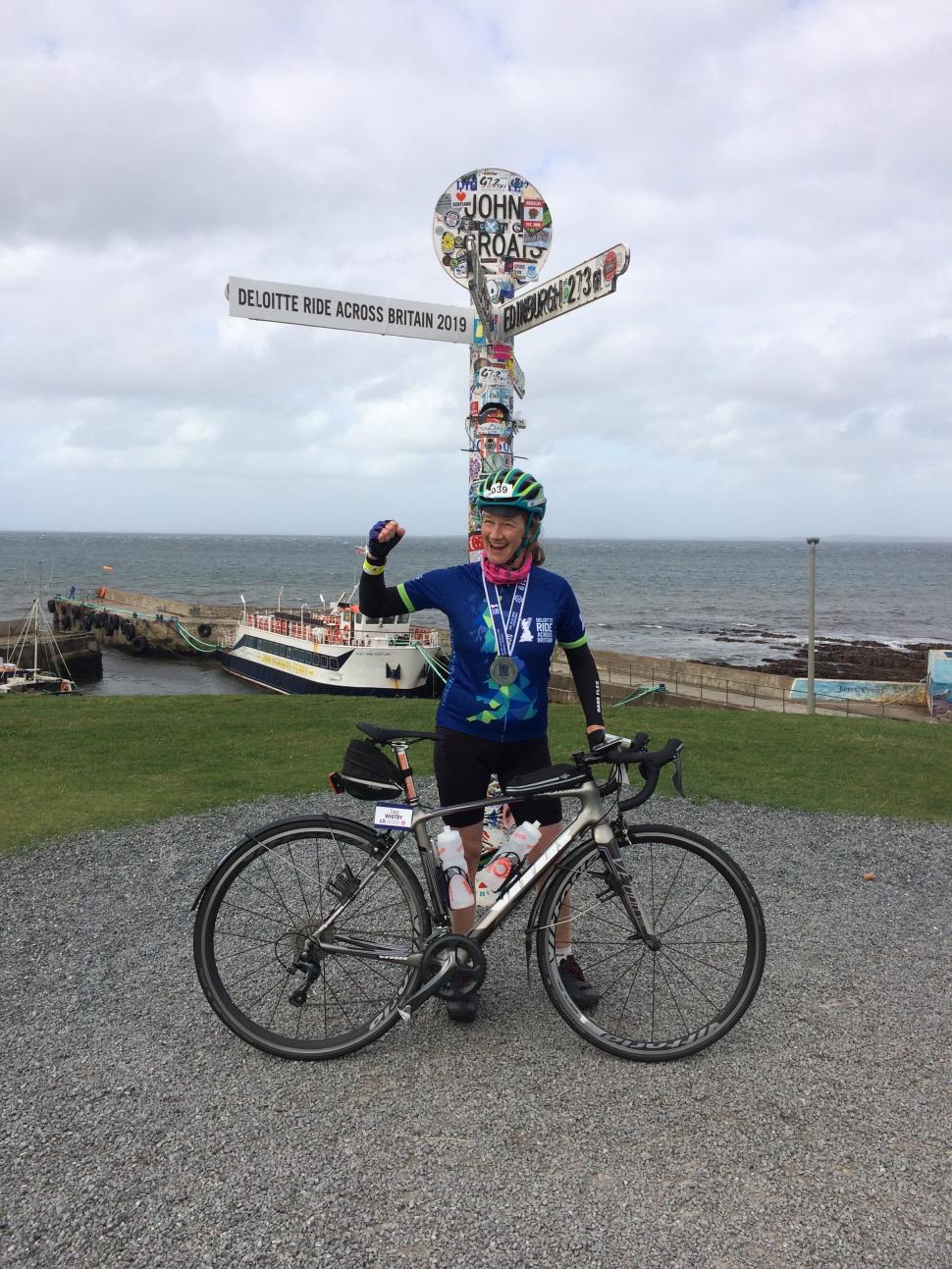 Ride the RAB all in one go, in stages, in ‘luxury’, for charity…