Moda showed their first ever British made carbon fibre road frame at distributor Moore Large’s dealer show this week. It’s still at prototype stage, they have some refinements and ride testing to do yet, but provided that all goes smoothly, it should be available as a frameset and complete bike this autumn as a 2015 model. This is a big deal. Carbon fibre bicycle manufacturing in the UK is almost non existent, but there are signs we’re witnessing the beginnings of a resurgent. Moda have been working with a Stoke-based carbon fibre specialist more used to working in the motorsport sector, for the past three years. In fact they first showed a fibreglass sample at the Cycle Show back in 2012. 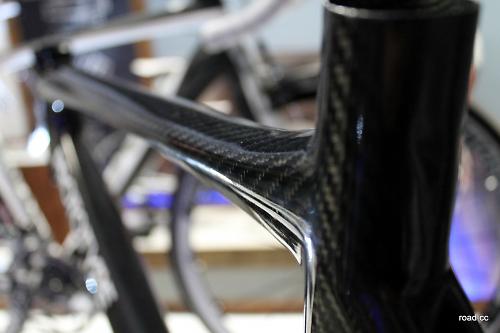 Moda brand managed James Ryan admitted they had hoped to follow up that launch with a production frame, but there have been delays along the way that have pushed it back. But it's here now, and coming to a bike shop near you before the end of the year. The frame they showed is the very first to pop out of their own composite mould, and looks pretty good. They've kept the naked carbon fibre finish to show it off, but production frames will be painted. On the scales it weighs a claimed 803g. That’s for the 56cm size pictured. However, James tells us they have plenty of scope to make the frame lighter still. The rear triangle can apparently be made with a few less layers of carbon fibre, so it sounds like they have potential to evolve the layup of the carbon fibre before the production frame is finalised. We expect the frame to change quite a bit over the coming months as they start getting some valuable ride testing data and feedback on the frame. 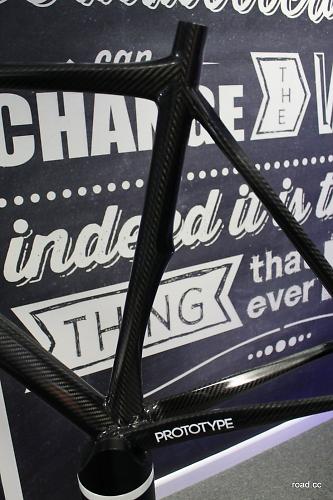 It’s still early days for pricing, but James told us that they’ll offer it as a frameset and a complete bike. They haven’t yet confirmed pricing, but they’re keen to make the frame competitive with the carbon frames (made in the Far East) that they already offer. A price of around £1,500 for a frameset isn’t beyond the realms of possibility. While the frame doesn’t show it, it’ll be compatible with all groupsets including electronic. It’s a good looking frame, with nicely shaped tube profiles, elegant seatstays that remain separate all the way to the seat  tube, which itself curves around the rear wheel. The head tube is a tapered design. Other final details will be revealed nearer the time. Talking to James, it’s clear they have an ambition to push the carbon fibre manufacturing from this initial frame, which will be available in two sizes, 54cm and 56cm, with 52cm and 58cm following as soon as the other moulds are created. Certainly, once they’ve smoothed out the final rough edges and get the production running smooth, it’ll be exciting to see what else they have up their sleeves. We can't wait to ride this bike when it's ready, and yes we have lined up a ride, so we'll be able to tell you how it performs. Don't hold your breath though, it'll be a good while yet.

The only other UK made carbon fibre bicycle brand we know of is Craddock Cycles, who launched late last year from their Worcestershire base with a plan to produce 50 bespoke frames a year. Carbon isn’t the only material getting some love from Moda, they’ve also got time for aluminium too. And good thing too, because we here at road.cc love a nice alloy road bike. This is the new Vivo, a £1,449 bike which replaces the Primo with a more advanced aluminium frame. The frame is a more refined development, and is also lighter. Looks good. 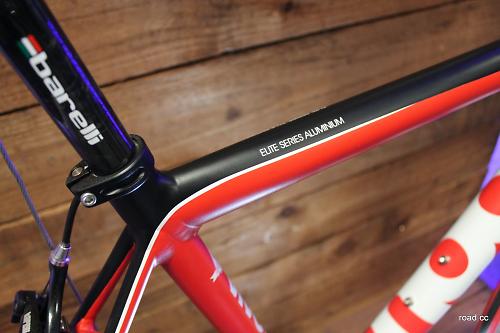 It’s built up for with a Shimano 105 groupset but Moda can do any build you want, so if you wanted full Dura-Ace and some posh American Classic wheels, you could do that. James even showed us such a build on his phone, with an Ultegra build and £700 wheels. In fact, you can see it on Moda’s Facebook page. 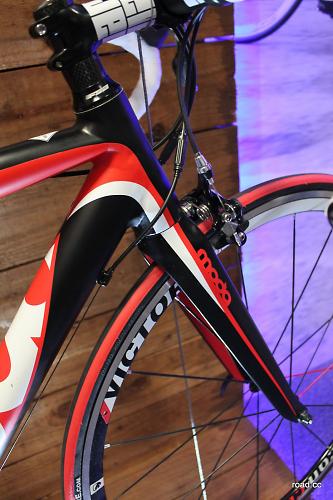 That's it from Moda for now. They do have a lot more lined up for 2015, with an updated of their titanium road bikes on the cards, but we'll have to wait until the Cycle Show at the end of September to see those.

More from Moda at www.todayscyclist.co.uk