First look: Bespoked UK Handmade Bike Show… There's a lot to see, so get on down there!

If there’s even the remotest opportunity that you could get to the Lee Valley Velodrome, London (home of the London 2012 Olympic track cycling) this weekend for the Bespoked UK Handmade Bicycle Show, seize it. You’ll be stunned.

Where should we start? There are about 150 brands here and pretty much every one of them has some fantastic products on show. Honestly, we could write dozens of stories from this place thanks to the amazing level of design and craftsmanship.

Sadly, all we have time for here is the (almost insultingly) briefest of tasters to whet your appetite.

Check out this road bike from Saffron (main pic). It’s built to a racing geometry from filet-brazed Columbus Spirit tubing and it’s been named Darling. The fork is Columbus Grammy and it has built up with a Shimano Dura-Ace groupset, Reynolds 46 Aero wheels, and the stem, handlebar and seatpost come from 3T. 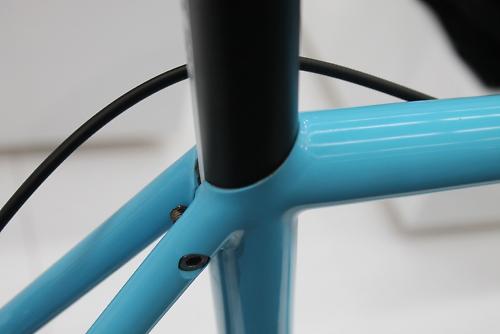 Saffron haven’t gone with a normal seatpost clamp, instead opting for a bolt between the seatstays.

That quote on the top tube says, “It doesn’t get any easier, you just go faster.”

Who said that? A point for everyone who said 'Greg LeMond'. Baum’s pink Corretto won the award for Best Road Bike. We’ll tell you more about this bike in a future story but the basic facts are that it’s made from titanium and Baum butt every tube with an individual rider in mind; they don’t pre-build frames or hold stock. The Czech-made Festka Mist is another titanium bike – using thin-walled oversized tubes. It is compatible with either mechanical or, as in this case, Di2 electronic shifting, and disc brakes. 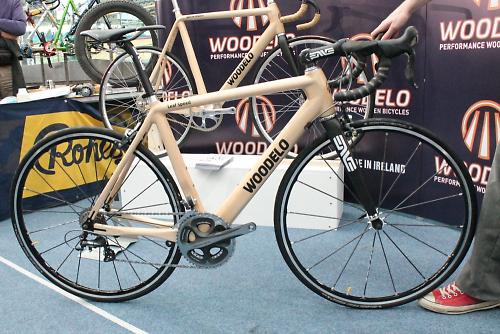 Next up, the Leaf Spring bike from Irish brand Woodelo. 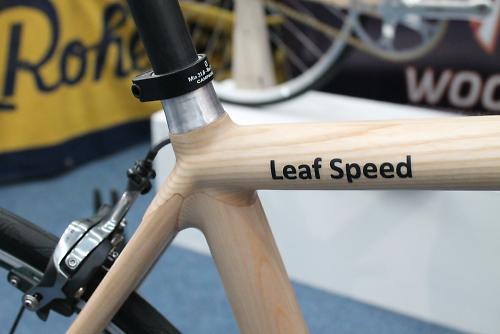 It’s a pretty special looking bike that’s made from ash. 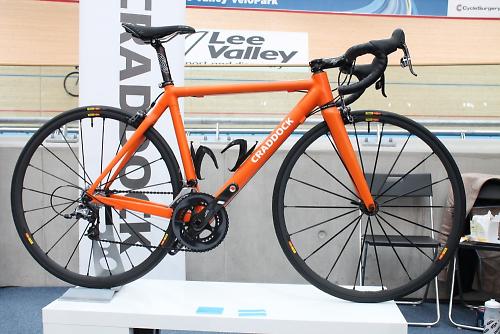 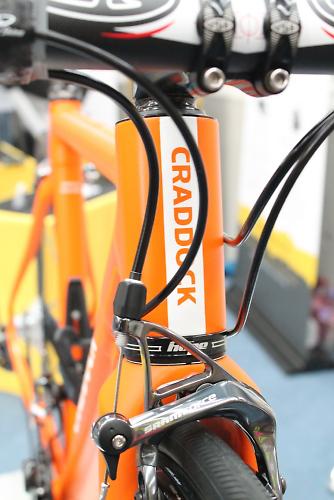 Founder Richard Craddock is self-taught and spent the past five years researching and developing carbon fibre fabrication, and building his own manufacturing facility with all the tools and machinery to produce his own bespoke carbon frames. He reckons he can produce up to 50 frames a year. 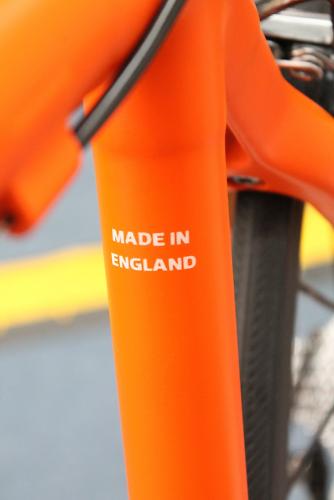 Craddock constructs the frames by bonding precisely mitred roll wrapped carbon tubes and then wrapping with pre-impregnated carbon, then curing in his own oven. It's certainly very neatly finished. 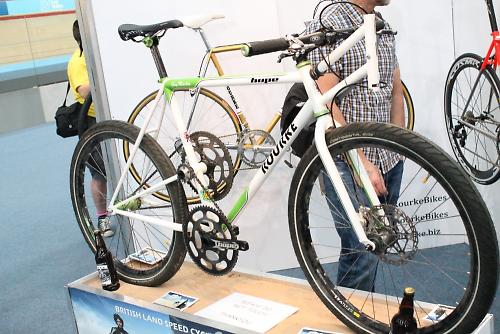 You might recognise this Brian Rourke bike as the one Guy Martin used for his recent speed record. Check out the gearing – that’s what you need to get up to 112mph. 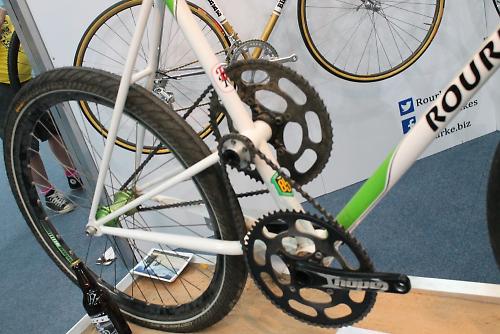 Donhou is well known for some of his stunning custom builds, but the framebuilder used Bespoked to launch his Signature Steel range of stock bikes. Partly inspired by the Rapha-Continental bike project from a few years ago, and many of the customer bikes he has made, he plans to offer a stock frameset, and here it is. He's looking to offer three sizes to begin with, and they'll all be made from Reynolds 853 with a stock geometry, and will be equipped with disc brakes. 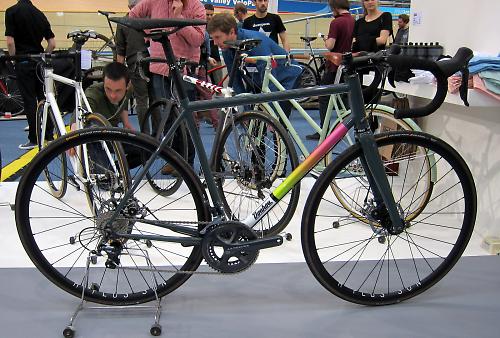 Check out the incredible cable and hose routing on this 29er fat bike from Titchmarsh Cycles, we've never seen internal gear cable or brake hose routing anywhere near as clean as this. More details on this standout bike soon. 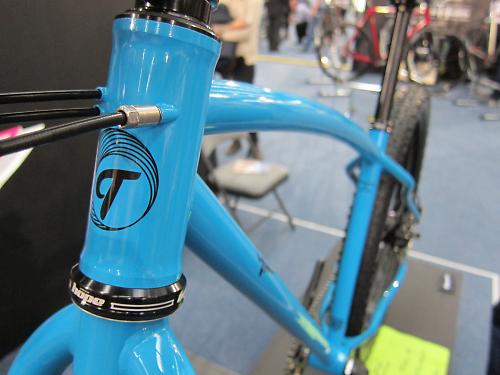 Ricky Feather is going racing. He launched his own race team at the show, which aims to get back to the old days of local racers going to local framebuilders for custom steel race frames. The frames are made from Columbus Spirt tubing with tubing company's brand new D-shaped down tube. Look out for these at a race near you this season. 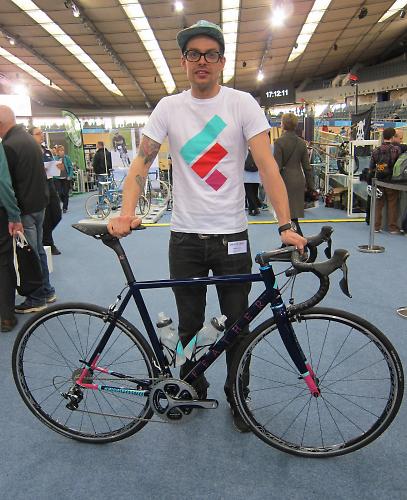 Want a British build carbon fibre frame? Well there are now a few more options. Along with Craddock above, you can add Nerve, just launched at the show, to that very short list. Nerve are claiming just 630g for this frame, and it's built by a chap who works in the F1 business so he knows a thing or two about working with carbon fibre. Every frame will be bespoke of course, and they reckon a lead time of aroiund six weeks. We reckon get in there quick before that waiting list gets a fair bit longer. 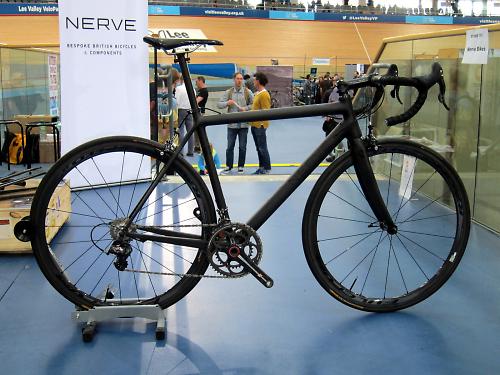 Condor Cycles are showing two Classico Stainless prototypes. This one is lugged, there is another out of shot which is TIG welded. They tell us they had a lot of requests for a bike like this, so they set out creating on, and very fine it looks too. They're not sure which version frame to put into production, we can't decide as they both look lovely. 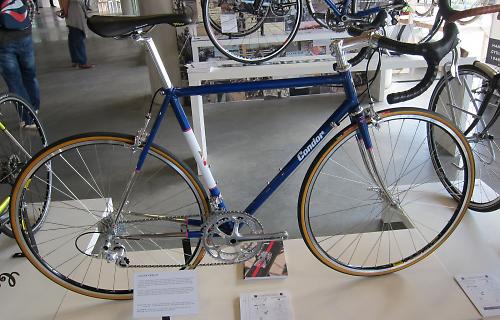 Shand have updated their Stoater, now just the one frame is available but by using the Paragon dropouts it can be offered in singlespeed, Rohloff or regular drivetrain options. Plenty of tyre and mudguard clearance and loads of eyelets for mounting racks. 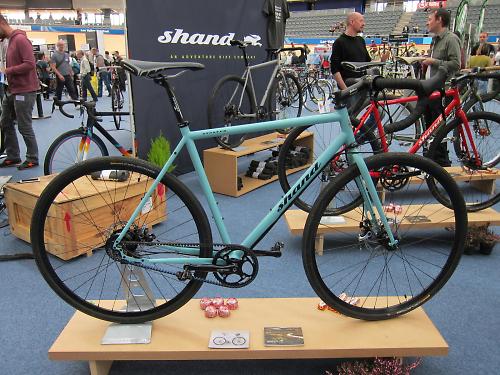 As we said, that’s just the briefest of brief snapshots of what you can expect to see at Bespoked – a random selection. There’s plenty more where that lot came from.

You’ll find the opening times, ticket prices, directions and all the other essential info you need on the Bespoked website. Take our word for it, you won’t be disappointed.

We’ll have loads more pictures and stories from Bespoked on road.cc over the next few days.