We've been playing with the prototypes of Rotor's new mechanical groupset. Here's what we learned.
by dave atkinson

It's not often you get three brand new groupsets to play with in one show. We've already seen FSA's electronic prototypes, and we tore ourselves away from playing Space Invaders with SRAM's new Red eTap wireless groupset (this really happened) to have a go on Rotor Uno, which swaps cables for hydraulics.

Why? Well, there are various benefits to running hydraulics. The most obvious is that the cable run is immaterial. You can run the hose wherever you like and make the bends as tight as the hose outer will allow with no loss of shifting efficiency. Once the system is set up it should be ebtirely fuss free, too: there's no cables to stretch and no holes for water to get into and ruin everything. There are no batteries to worry about either. There's also the promise (as yet unfulfilled by Rotor) of multiple shifting positions: You can splice two hoses together and have a shifter at the end of each one. That's good news if you have a time trial setup. 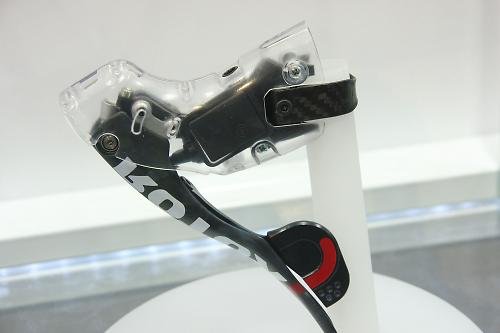 Some basics: The groupset is 22-speed (2x11) and it uses a standard 5mm brake hose for the brake system and a 3mm hose for the gears. It's narrower so it'll fit through existing frame holes. The shifting and braking systems are entirely separate, each having a master cylinder in the lever hood. Uno uses Magura's Royal Blood mineral oil; all the hydraulics are produced by Magura and the groupset uses Uno-branded Magura disc callipers and Magura's RT8 hydraulic rim brakes. Either brake can be run from the same lever, you don't need a different one. Actuating the gears works in a similar way to SRAM's DoubleTap. A short click drops the derailleur down, with a longer push shifting the other way. The rear mech can be shifted up to four gears at a time; there's an adjustment screw in the lever hood which allows you to set the maximum number of shifts you want for a single push, up to that maximum. The front mech has four positions, two trim positions for each of the two chainrings.

And what's it like to use? Well, we only got to play on the demonstration units at the show booth, we weren't allowed out on the roads. But not to be deterred we gave it a good clicking. On the rear mech the downshift is very positive and the upshift a bit less so, especially when you have it set up for multiple shifts. The front mech is a pretty chunky click going both ways. These are still prototypes so we can't really say much other than it appears to work, and give you a bit more detail about how. There's no weights or prices as yet. Uno should be launching next year, and we'll be off to Rotor's base in Madrid when the time comes to put it through its paces.