And that's not all... coming soon, the voice of Phil Liggett to help youfind your way to cake...
by Simon_MacMichael

It’s less than a fortnight since we covered the launch of the Bike Hub Cycle Journey Planner’s iPhone app, dubbed the ‘satnav for cyclists,’ that has received some rave reviews on iTunes, but already new features are being added that will make it even more useful when you’re out and about on your bike.

Currently, the app, which is also being developed for the Android platform, includes a feature that helps locate the nearest bike shop, very useful if you suffer a mechanical problem somewhere unfamiliar.

Now, an equally useful feature will see cyclist-friendly cafés added. No doubt you already know the best place to top up on caffeine and cake while out and about on your regular routes – in which case, you can flag its details up to help out other cyclists exploring your area.

But we all know what a pain it can be to try and find somewhere decent when you’re following the road less travelled, and particularly an establishment that won’t take on the atmosphere of a saloon in a Western as you walk through the door, your cleats click-clacking across the floor and curious locals falling silent to stare at the stranger. 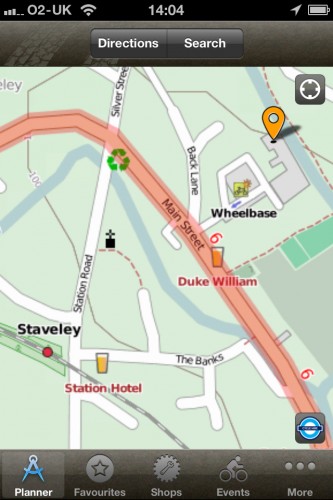 The app uses OpenCycleMap mapping, derived from the OpenStreetMap (OSM) project, descrbed as the ‘wikipedia of maps,’ a worldwide community of 300,000 map enthusiasts who work together to produce the most up-to-date maps possible.

OSM already includes a ‘restaurant’ layer, and this functionality will soon be rolled out to OpenCycleMap, allowing you to check whether your local coffee stop is there.

Should it be missing, you can add details either via your iPhone using free OSM editing apps such as Mapzen POI Collector, or from your computer by joining the OSM community and using online services such as those found on cloudmade.com.

Ahead of the café-finder going live, Bike Hub has come up with its suggestion of ten of the best cycling-friendly cafés in England, but if your favourite is missing – or you have suggestions for the best biking cafés in Wales, Scotland or Ireland – be sure to let us know in the comment thread below.

There’s nothing in the list for the Cotswolds, so we’ll kick off with the Old Mill Café, 7 West Street, Chipping Norton, Oxfordshire, a regular stop for local and not-so-local riders and a regiular haunt of one member of the road.cc team.

We do wonder though whether OpenCycleMap will let us put a flag in warning ‘Here Be Clarksons,’ to warn of the presence of our friendly neighbourhood TV motoring presenter who lives up the road?

And talking of voices familiar to you from TV, one other exciting development coming soon is satnav guidance featuring the voice of none other than Phil Liggett, definitely a plus for those among us who fancy we’re on a solo break in the Tour de France when we’re actually just putting some miles in on or own around the British countryside.

That feature is around three months away from going live and will be made available as an in-app purchase. It will be preceded by a free voiceover feature using a synthetic female voice.

In the meantime, here’s Bike Hub’s suggestion of ten of the top cyclist-friendly cafés, we look forward to hearing yours! 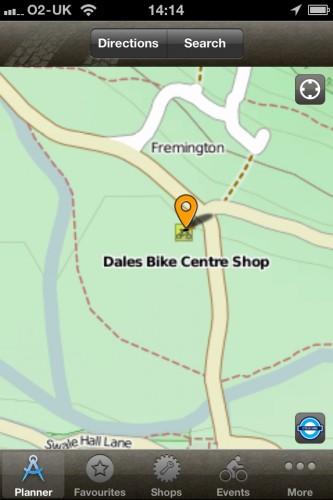