A London-based firm of personal injury solicitors has used data from the 2011 Census to map levels of commuting by bike in the city. The result is an attention-grabbing map that highlights in detail the capital’s hot – and cold – spots for cycling.

Since Census data relating to travel to work were released last year, much attention has focused on the levels of cycling in Hackney, made clear in the map drawn up by law firm Bolt Burden Kemp, which has its offices in neighbouring Islington. You can view the full-size version here.

Each of the top 12 wards for cycling to work (the data cover the main mode of transport used in the journey) fall within Hackney – wards falling within the top 20 are numbered on the map – and in three of those, the figure is above 20 per cent.

The only other boroughs represented in the top 20 are Islington and Camden, both also in Inner North London, plus Herne Hill in Lambeth, the sole location south of the Thames. But it’s in the only borough that sits either side of the river that one of the more arresting features of the map can be seen – Richmond-upon-Thames, the sole Outer London authority in which cycling to work levels approach 10 per cent in places.

The factors behind the levels of cycling in Hackney will be very different to those driving it in Richmond-upon-Thames.

The former is one of the poorest boroughs in London, home to a large immigrant population as well as young professionals working in creative industries and students, the latter is among the wealthiest, including many who are established in their careers, something reflected in income levels as well as factors such as car ownership.

Hackney is also underserved by public transport links – there’s no direct tune or rail link into the city centre, for example – while Richmond is well connected to the city, with trains taking 20 minutes or so to head into Waterloo, for example.

That suggests that while for many in Hackney, a bicycle is an obvious choice to overcome the absence of direct public transport links and overcome what would be a convoluted and expensive journey, in Richmond-upon-Thames, more lifestyle-related factors such as using the trip to keep fit might be at play.

Another thing clearly reflected in the map is the impact of commuting distance into the city centre – the subject of an infographic we reported on last week, which highlighted that bikes are faster than public transport over a distance of roughly 8 miles. 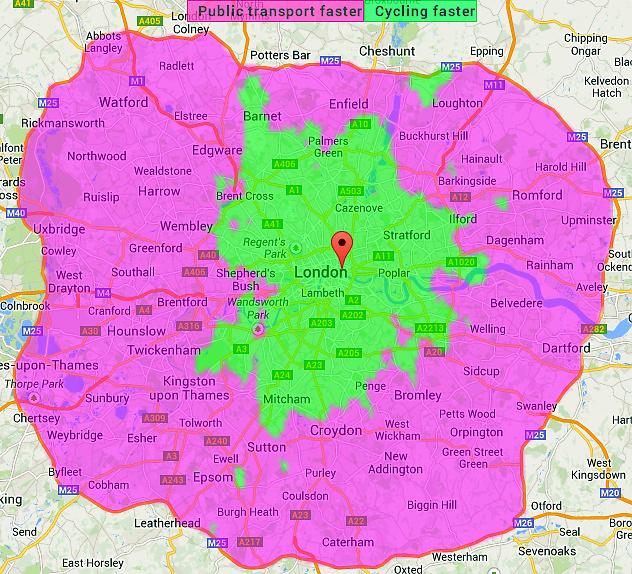 Bolt Burden Kemp’s map reinforces that point – with the exception of that large swath of southwest London, there’s a big drop off in levels of cycling once you start moving from the Inner to the Outer boroughs, several of the latter having no areas where bike commuting is even close to the 4.3 per cent average across the city.

It’s not the first time 2011 Census data have been used to chart where London’s cycle commuters live, but it is a lot more detailed – and more topographical, based on an actual map of the city – than one we featured in July, which treated all areas above 5 per cent equally. 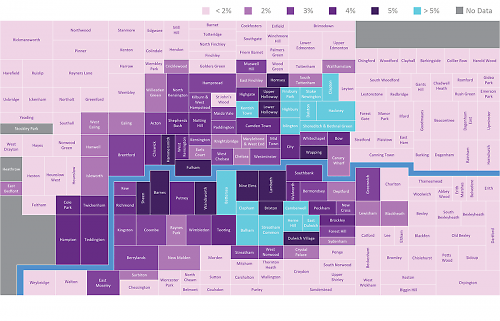 That graphic, drawn up by renting information website Rentonomy, was accompanied by one showing the most common commuting destinations – sadly, that information is only available currently for the 2001 Census.