With all the carbon technology going on with the WorldTour in Qatar, nice to see there are still frame startups in steel...
by nick_rearden

A new company called Cyclo Bicycles will deliver in 6 -8 weeks any one of a small selection of frames made in Columbus or Deddacciai steel tubing.

Cyclo is based in Barcelona but the frames are made in Italy and the things that appeal to us are that the colours are beautiful and the workmanship good along with neat modern details that you don't often see in a 'traditional' frame - look at those integrated headset cups on the Monica frame above.

Cyclo 'Grava' frame can be made with geometry and braze-ons suitable for touring or 'cross. 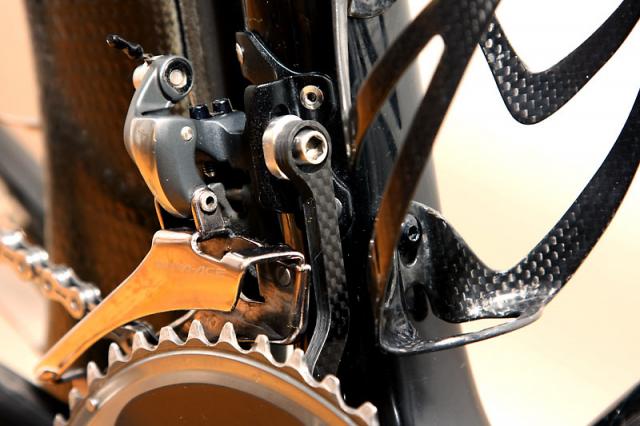 We recently posted about Sigma Sport the bike shop in Kingston, Surrey having sourced its own carbon fibre chain catchers made by a local company that normally makes parts for Formula 1 cars. Which made us fear that the price when they finally went on sale would be £99. As it happens, the £19.99 they've settled on doesn't seem too bad considering the carnage a chaincatcher can avert and, hey, it's carbon-fibre and each one only weighs 3 grams. 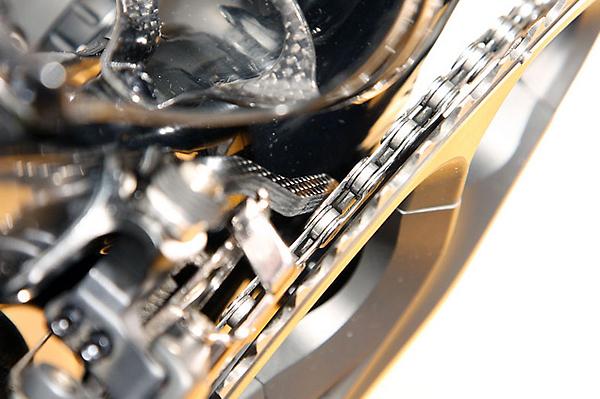 'A Day In The City' video from Ribcap

With St Valentine's day coming it seems only right to celebrate a little bicycle-related romance in the city. Properly protected with helmets, of course.

The Hornit is in the house for review and with its 140 decibel chirping sound is claimed to be the world's loudest for the job of alerting inattentive drivers in their wafty-silent interiors. It's also  supposed to be aimed at pedestrians according to the video below but we're looking forward to testing whether the switchable and quieter 'park' mode is more appropriate for use on canal tow paths and the like. The unit is designed to be handlebar mounted using a flexible rubber clip and there's a remote thumb-shifter style switch to be installed wherever it's ideal for quick access and while you're covering the brakes. The Hornit runs on 2xAAA batteries and with them included weighs 96 grams.

The freezing and wet weather-savvy bike riding Scots at Endura already have good experience with using some of the lighter and more flexible forms of Neoprene for making overshoes - and we've reviewed some of them here - so it's no surprise to see them using the material for their latest gloves. "The double laminated neoprene construction with bonded seams makes the FS260-Pro Nemo Glove a highly water resistant glove," it says here. "The high-tech neoprene fabric also accounts for the great insulation properties, high durability and dexterity as well as the really snug fit of this glove. Its extended cuff is designed to fit under jacket sleeves to prevent your wrist from getting exposed to the cold." Sizes available in shops already are S-XL and the price is £27.99.

At £27.99 a set, this Lizard Skins DSP handlebar tape is some of the more expensive you'll see but so far the plush 2.5mm tape we fitted to our 'best' bike for the summer is lasting really well and even more importantly was as comfortable as we'd hoped. The 'DSP' stands for Durasoft Polymer, a material that seems to pull off the impossible task of being both soft and strong; we also like the slightly 'sticky' surface texture which is especially reassuring when you're essentially steering with your thumbs while shifting and changing gear from the drops. Anyway, as you've no doubt noticed from our road.cc home page poll, we're going through a bit of a Bianchi passion at the moment (despite the readers appearing to prefer otherwise - ed) so we're glad to see there's a new DSP tape colour option available now in Celeste, the legendary colour to match your Bianchi.

Rotor offer 'try before you buy' on their ovalised Q-Rings

The oval chainring makers at Rotor are so convinced you'll find yourself benefiting from their products' distinctive non-circular shape that they're offering a 'try-before-you-buy' option on all their Q-Rings during February and March. "We are so sure that every cyclist can benefit from riding Q- Rings that we are willing to make this offer as an incentive to try it." says Ignacio Estelles the Rotor CEO from Madrid where they're made. 'Q-Rings have shown great success in both the pro and amateur ranks but they are not only for the competitive athlete." Rotor Q-Rings are used by the Garmin-Barracuda WorldTour professional team as well as UK-based time triallists Julia Shaw and Matt Bottrill.

Rotor say, "Every customer that buys a set of Q-Rings from a participating dealer during this period will have 30 days to try, test and evaluate their benefits. In this time frame the rider will have a chance to determine their optimal chainring position and discover a more efficient pedaling stroke."

According to Rotor, some of the benefits of minimising pedal stroke 'dead spots' by using their specially ovalised chainrings are reduction in knee strain, lowered lactic acid production and heart rate, increased power output resulting in stronger sprints and acceleration as well reduced fatigue and faster recovery. Rotor say they are only offering this promotion through 'bricks-and-mortar' dealerships as they're keen to have the correct setup of the Q-Rings explained for "optimal chainring position." The price for a pair of chainrings in six different combinations from 50/34 to 54/42 is £175.

Talking of 'try-before-you-buy' bike makers Giant are launching an internet-based test ride system to complement the recently-announced Click-and-Collect service where customers can order a new bike and collect it from their preferred dealer, who does the setup. If that all seems a bit fast - you may not know what you want well enough without trying first - the Test Ride site takes a step back by booking first of all the bike you want to try. Ian Beasant of Giant UK says, "Giant have successfully participated in many demo events; the demand for a true Test Ride facility became apparent not only by the amount of time consumers would wait to test a Giant bike but also the long distances they would travel."

He goes on, "Consumers read great reviews of Giant products in magazines and websites and we now offer the opportunity to ride the same bikes. The proof is in the ride and we are confident that once consumers ride our product they will realise just why Giant bikes are winning countless tests."

Book this £1,249 women's Giant Avail Composite 3 to try before committing to buy.

Recent discussion on road.cc confirms that readers are loving the range of smartphone apps available to log their bike rides but pretty much all complain that the limiting factor is battery life. 2-3 hours is all very well for routine mileage but what about the big events where you really want to see where you are and how fast you went? Enter BioLogic who already make a waterproof handlebar case for the Apple iPhone as well as one of the better data loggers in the form of the free BikeBrain app, also for iPhone.

The new Reecharge Case due in UK shops in March might solve the battery endurance problem though and we've just had in a sample to review. It looks and operates somewhat similarly to the standard BioLogic iPhone mount but is deeper, enclosing a 1,400mAh lithium polymer battery that should in theory increase battery life by a factor of four. The price will be £88 which needs to be weighed against the cost of a dedicated GPS unit like a Garmin or Bryton. Any of them might do a better job in their own right but of course won't do all the other clever smartphone functions.

Urban Hunter tell us they nearly choked on their tea when they saw one of their little painted cycling figurines starring on TV in an advertisement for Boots the Chemist. We've been watching out for it as we cannot imagine what the story must be - perhaps it's a Kraftwerk LP? - but it's one more sign to us that the advertising mavens in Soho are still in love with cycling and that they've hopefully now discovered gears.

"If your time is worthwhile, keep it with a man who is worthwhile," says the advertising copyline for the £1,099 IB01 carbon watch named after and signed by Liquigas-Cannodale cycling hero Ivan Basso. Can't argue with that and we particularly like that it has an old-school, automatic mechanical movement inside that stealthy black case. As befits a man who's going to be riding SRAM's new Red gears this year featuring lots of carbon-fibre but definitely no new-fangled electric motors. Forza, Ivan!